Thunder Force catered greatly to my nostalgia for superhero movies 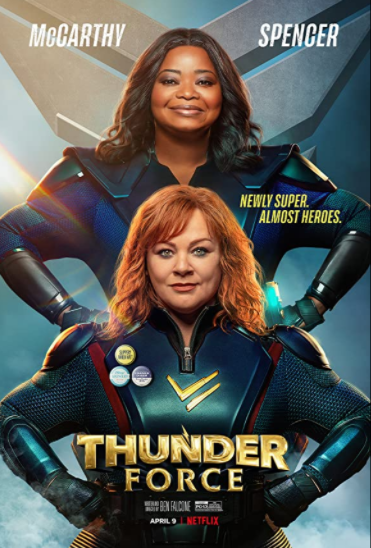 Action and superhero movies have become my go-to option for comfort. Marvel movies specifically remind me of a friend I don’t talk to much but love greatly. This draws me to superhero movies and also allows me to slightly relate to the characters in Thunder Force.

Thunder Force starts in a flashback to the nineteen eighties. Emily Stanton (Octavia Spencer) has just been orphaned after her parents were killed in an accident involving Chicago’s “Miscreants.” Miscreants are people whose lineage traces back to 1983 when cosmic rays messed up certain people’s DNA. This led to them having supernatural powers. The Miscreants felt out of place and most of them turned to a life of crime while being clinically diagnosed sociopaths.

After Emily’s parents were killed in the accident, she moves schools and starts to get bullied due to her parent’s accident. Lydia Berman (Melissa McCarthy) is the only person that stood up for her. Standing up to Emily’s bullies kick starts this duo’s friendship.

Flash forward around thirty years, Lydia and Emily don’t speak anymore. All of that changes when Lydia receives Emily’s phone number the day before their high school reunion. After Emily promises to show and doesn’t, Lydia tracks her down.

One mishap leads to another and suddenly Lydia is alone in Emily’s fancy office. Unable to listen to simple directions, Lydia plays around with buttons and levers. Lydia ends up with several needles in her face and thirty-three more days of injections ahead of her. She will ultimately end up with insane superhuman strength while Emily will be able to turn invisible.

Emily and Lydia will become exactly what their city needs: a team to fight against the Miscreants, specifically The Crab (Jason Bateman) and Laser (Pom Klementieff). Through the Thunder Force, and the help of Emily’s daughter Tracy (Taylor Mosby) and former CIA agent Allie (Melissa Leo), Emily will also complete the goals her parents started many years prior.

Something about two best friends reconciling through a somewhat stupid accident excites me greatly. I feel like it is exactly something that would happen to me. Adding a layer of action to the plot gives further reason to show why the accident wasn’t so bad after all. Emily and Lydia work perfectly together.

I feel I can relate a lot of my friendships to Emily and Lydia’s. My friends and I may not always talk much, but we work great when we do.

The powers Emily and Lydia each ended up with seem to be an ode to their past. Lydia has super strength to accentuate her role as the tough friend. Emily has the power of invisibility. This alludes to her most likely wanting to disappear while she was being bullied. It could also show how Emily liked to stay inside and away from a lot of people while Lydia enjoyed partying and going to concerts. The thought put into which character should have which powers showed how well-thought-out this movie was.

In total, Thunder Force had incredible factors that have brought it to most likely take a stance on my favorite movie list.