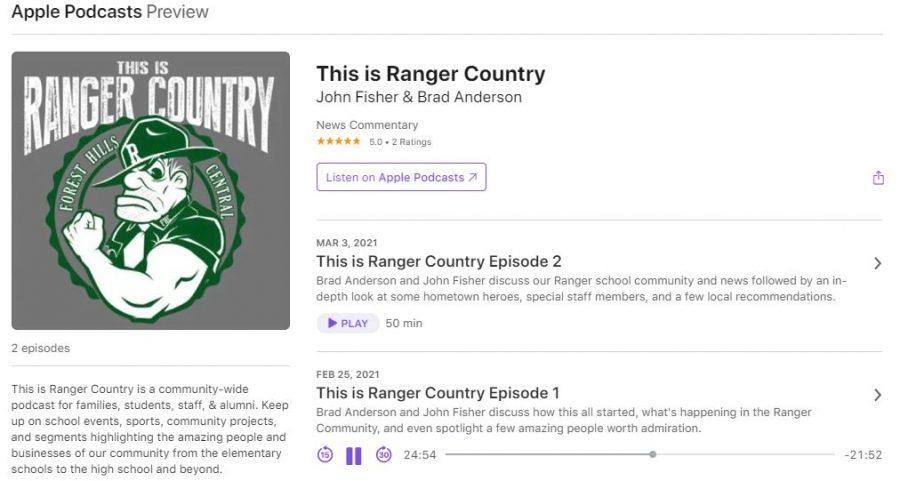 This Is Ranger Country, a podcast featuring Brad Anderson and John Fisher

With 700 listeners less than a month after its creation, the This is Ranger County podcast has taken off better than anyone could have expected.

The kickstart of the This is Ranger County podcast has been a successful project between English teacher John Fisher and history teacher Brad Anderson. This is an audio cast open to the community that covers facts and information on the activities at school, current updates, good news, and more. They upload an episode once a week and have seven released at the moment; they last around forty-five minutes with a wide range of discussions ranging from staff spotlights to hometown heroes.

The podcast can be found on Apple Podcasts, Spotify, and RSS and is completely free. The intro of each podcast starts off with the famous Ranger chant and a chorus of cheers from the crowd. A grant received by the duo has given them the opportunity to create a podcast studio with a multi-mic, open studio setup.

This is Ranger County is open for listeners in middle and elementary schools or even just an at-home-listener in the Forest Hills community. The duo record on Tuesdays and release their episodes by Wednesday with limited edits. Though this creates a lot more pressure while talking, Fisher and Anderson seem to have gotten the hang of it.

“It’s really great because Mr. Fisher and I are friends,” Anderson said. “We just talk and it’s us sitting there having a normal conversation.”

While a large portion of their podcast is casual conversation, they also follow a script that has been formulated beforehand with their mutual love for the community and students they know kept in mind.

History teacher Laura Stiles is the only person guested on the podcast, but Fisher and Anderson are looking forward to inviting more people from the community to join them during their talks. Fisher enjoys how it’s given him the opportunity to open up and meet more people that he wouldn’t normally speak to.

“People that I haven’t spoken to in a while have emailed me [about the podcast],” Fisher explained. “I’ve reconnected with these people because of this podcast.”

Recently, podcasts have been gaining more recognition. It’s seen as more of an adult activity, but Anderson is looking forward to it growing more every day.

“We’re hoping students will listen in because we highlight things that students are doing,” Anderson said. “It’s really cool to hear your name and what you’re doing be recognized.”

As the podcast begins to grow, Fisher hopes to continue this newfound love by creating an extracurricular club and later an elective for learning the basics of podcasts. Through this, students would learn to record, direct, and release the fundamentals of these audio episodes.

“The initial idea was to turn the podcast idea into a class,” Fisher said. “ We want other students to learn and love what we get to do.”

They’ve taken their inspiration from Paul Harvey—a former American radio broadcaster—who gave news at noon. While they aren’t looking to replicate this famous broadcast from ABC News Radio, they still share the same beliefs and hopes for this podcast.

“It was one of those things where [no matter where you were], you would tune in and listen [to Paul Harvey],” Anderson said. “We’ve tried to follow that template with an added twist.”

Fisher believes that the approach of the podcast would have showcased different topics in the community, as currently, it’s about the strength the community has built up over the past year.

Since they’ve practiced this routine frequently, they’ve adapted to speaking for everyone to hear and using their equipment in the most comfortable way possible.

“I’m a big eye contact and hand movement person,” Fisher started. “When you’re talking on a microphone, it’s harder to do what you’re so used to doing all the time.”

“I’m so excited for how the podcast is continuing to turn out,” Anderson said. “We hope people listen in and get excited about the things we talk about.”