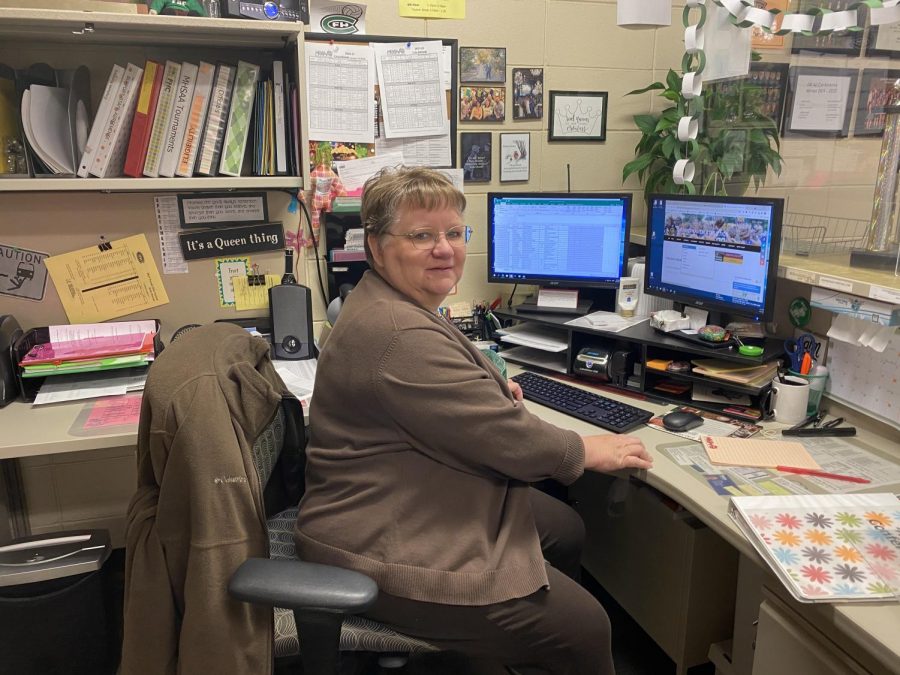 Mrs. Sprys hacking away at her work for the day.

At the end of the year, FHC will sadly be losing one of the biggest unsung heroes in the building.

Athletic secretary Carol Sprys will be retiring after working seven years for the athletic department. English teacher Lisa Penninga, whose room was right around the corner, loves the friendship she has formed with Sprys.

“She’s like my work momma,” Penninga said. “I visit her often in the [athletic] office just to say hi and make copies.”

What truly skyrocketed Penninga and Sprys’ friendship is how she can talk to her about anything.

“I think what’s really nice is the fact that I can really go in, and we talk about our weekends and what’s happening in our personal lives,” Penninga said. “She’s someone I can truly vent to when I’m mad, and she’s my safe place for me.”

Not only is Sprys there for her fellow staff members, but she cares for every single student who walks through the door.

“Once, a kid passed out in my class,” Penninga said. “I brought her [to the athletic office] and she provided for her accordingly; she’s such a mom and looks out for all the students and staff. She’s so sweet and has a great soul.”

Sprys and Penninga’s friendship has gone on for so long, Penninga has a hard time remembering how long Sprys has even worked with FHC.

“I would say ten years,” Penninga said. “But it feels like she has always been here; she’s part of the FHC family.”

With Sprys’ soon-to-be departure, Penninga said she will miss Sprys once she leaves.

“I am going to miss her so much,” Penninga said. “I’m not only going to miss her because her spreadsheets are so organized and [she] knows every answer to everything, but she’s such a kind soul—she organizes everything and does small things to make my day, like leaving goodie bags on my desk for appreciation. She’s such a bright light in our building.”

Although regular students don’t seem to know Sprys that well, Penninga thinks that she’s a key reason why the athletics run so well.

Penninga knows that Sprys isn’t a fan of the spotlight, but the amount of work Sprys puts into the athletic department shows that she deserves more credit than she’s given.

“On a daily basis, I tend to make sure that students have their paperwork in and are tested for COVID-19 every Sunday,” Sprys said. “Just today, I made sure that the girls lacrosse game had the ticket stands prepped for today; we did the schedule for next week with confirming schedules for where and when the games will take place.”

Even if that seems like a lot of work for just one person, Sprys doesn’t like to receive all the credit for those tasks. She likes to think that she’s just there to make sure that everything runs smoothly between the coaches and students.

Once she moved to Grand Rapids from Novi, she sought a new job. Lucky for her, Sprys was able to find a new job fairly quickly.

“I came from Novi High School and was the athletic secretary there for 12 years prior to working at FHC,” Sprys said. “I was lucky enough that the job was open so I could continue what I was doing on this side of the state.”

Sprys has had the opportunity to make friendships with all of her colleagues.

“A lot of the coaches, their wives, and I have become friends over the years,” Sprys said. “[English teacher] Mr. [Ken] George, the soccer coach, and many more. [We] would go out to dinner prior to COVID-19 to be in a different environment and catch up.”

Sprys had difficulty leaving her friends back in Novi, but while working at FHC, she has had the opportunity to meet new people. She hopes to keep in touch with them after she leaves.

She was also able to bond with many students over the years.

“It’s funny. We’re in an office where I don’t see that many kids, but they know who I am,” Sprys said. “We used to have a candy dish on the counter prior to COVID-19, and we’d have regulars come in and talk to us. It was great; we were able to interact with students and form a connection with them.”

Although Sprys isn’t able to interact with as many students as she would like to, she still tries her best to show her school spirit and attend as many sporting events as possible.

“I love interacting with the students,” Sprys said. “My husband and I try to go to as many sporting events as we can. At the first hockey game of the season, a mother approached me and asked me, ‘Which one is your kid?’ I said all of them because I’m the athletic secretary, and they’re all my kids.”

One person who knows how much dedication and care she has for FHC’s athletic department is athletic director Clark Udell.

Like Penninga, Udell thinks that Sprys is the unsung hero of the athletic department.

“She often goes out of her way to do the small things,” Udell said, “which are so important without anyone really noticing.”

After being part of Novi’s staff, Sprys was able to bring her extensive knowledge to FHC.

“Sprys has been an invaluable resource to FHC athletics,” Udell said. “She came to FHC with extensive experience and fit in right away. She would often refer back to her old job and give great insight into a question or situation that we were dealing with.”

With Sprys’ knowledge, Udell appreciates how much she brings to the athletic department.

“Carol is incredibly detailed in how she does her job,” Udell said. “These small characteristics make her extremely good at her job.”

“She is extremely organized and on top of everything,” Kimball said. “I love that when I need something, she always has it. If it’s candy, Ibuprofen, a bandaid, or even someone I can vent to, she’ll be there.”

Not only is Sprys someone who is there for her fellow staff members, but Kimball also thinks that she deserves more credit.

“She absolutely deserves more credit than she gets at FHC,” Kimball said. “She helps keeps the athletic department organized and running smoothly. She takes care of all the behind the scene stuff, which is a lot.”

Sprys and Kimball’s friendship is just one in a sea of many. But, Kimball remembers their first meet like it was yesterday.

“We met through FHC,” Kimball said. “Her office is right by my room, so I was in there quite a bit to make copies. Some of my former students helped her out at times, so that led the way to us getting to know each other.”

Once Kimball and Sprys slowly got to know each other, their friendship grew as time went on.

“Carol and I got to know one another when I moved into my classroom quite a few years back,” Kimball said. “I frequently was in her office, and as I continued to go in there for whatever reason, we just began to talk more about our lives, families, kids, and sports. This is what made us more than just co-workers.”

Udell acknowledges how much dedication she has put into the school.

Just like Udell, Kimball is going to miss Sprys tremendously once she leaves.

“I will miss her so much,” Kimball said. “Carol is so thoughtful. I will come into school, and she has left a treat or a little gift on my desk; it definitely brightens my day. I have grown so used to stopping to see how her day is going, how her weekend was, to celebrate success, or just share frustrations. She is truly irreplaceable.”