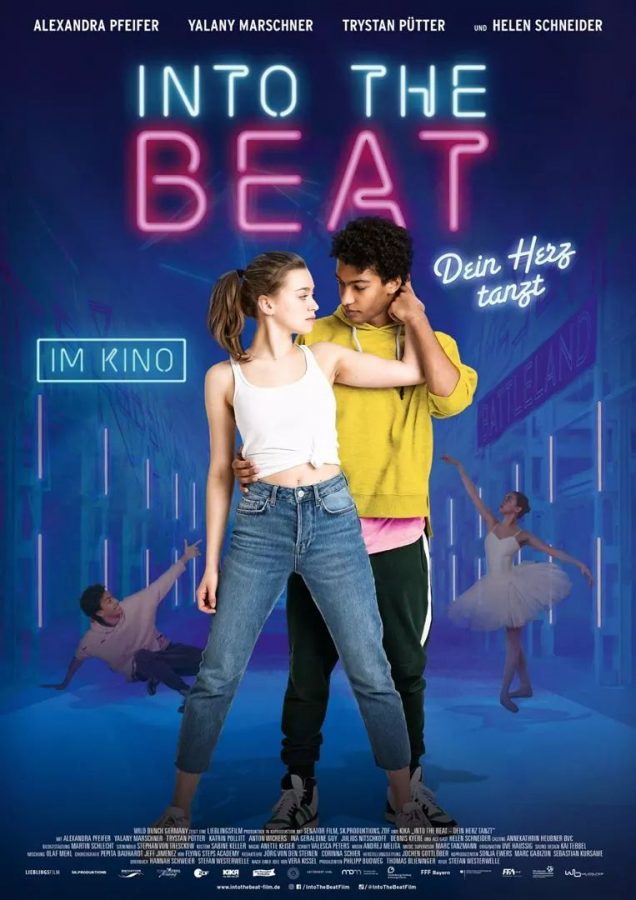 A poster for the German movie, Into the Beat, recently released on Netflix

While watching Into the Beat, I had to switch my TV on and off multiple times before I realized why none of the words matched up with the mouth movements. The film, released on Netflix on July 16, 2020, was dubbed in English after being released in German.

While the overall quality of the movie was fairly high, the dubbing was certainly noticeable. Initially, I couldn’t tell that protagonist Katya Orlow (Alexandra Pfeifer) was not voiced by Pfeifer. However, after looking more closely at the lip movements of side characters such as Pepper (Dennis Kyere) and Jo (Julius Nitschkoff), I realized that there was minimal effort put into making the voices line up with the movements of the characters.

Despite the subpar lip dubbing, I couldn’t help but enjoy myself while watching Into the Beat. The story follows the journey of Katya, an exceptional ballerina who inherited her talent from her parents, who were also once famous in the field of ballet. Although Katya has participated in ballet for the majority of her life, her focus shifts when she accidentally stumbles upon a hip-hop studio.

There were many scenes throughout the movie when the music kicked in and the characters erupted into dance, but considering the film’s focus on the art of dance, this fit the picture. Unlike some musical movies, the spontaneous dance numbers blended seamlessly into the rest of the scenes.

One of my favorite scenes took place with the hip-hop group on a subway. Stunts and modern moves were performed against the background of invigorating music. This piece of the movie renewed the energy that the movie lacked in some of the slower scenes.

In addition to the interesting dance sequences, the film‘s alternative edge helped move along the unoriginal plotline. Into the Beat’s actual storyline was nothing special, but the neon lights set against black backdrops and blaring music entertained me enough to blind me to the blandness.

On the other hand, the excited energy incorporated into the movie sometimes went overboard—literally. In one particular scene, Katya and her love interest, Marlon (Yalany Marschner), break onto a boat illegally for what appears to be no reason at all, besides creating random thrill. They are met by the boat’s guards, and they break out into dance in front of them before leaping off the boat. This part was extremely odd and unrealistic—a very unnecessary addition to the film.

The unbelievable features of the movie didn’t stop there; Katya’s ballet teacher, Frau Rosebloom (Helen Schneider), was extremely rude and strict, beyond the normal stringency of ballet teachers. At one point, she told another student to leave the class because of a few minor errors; if Rosebloom was less severe, I could have seen her as an actual antagonist rather than an unrealistically harsh teacher.

In spite of all this, the wild personalities and wild moments in the movie were what ultimately made it amusing and worth the watch. Without some of the radical factors, Into the Beat could have turned out dry and expressionless.

Although there was much room for improvement, Into the Beat did not disappoint. My expectations were not high, but they were far surpassed by the positive energy flowing from the screen.