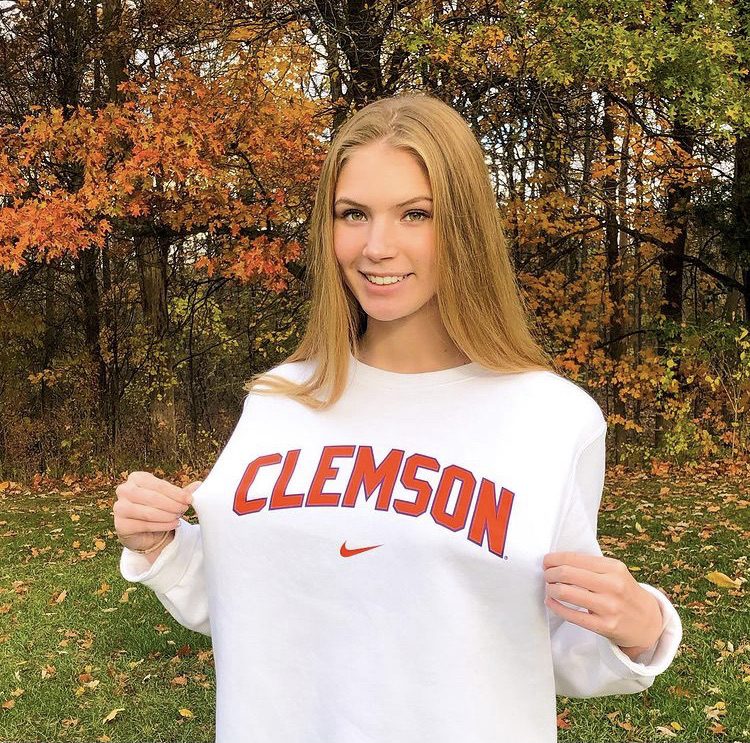 When junior Brooklyn Conner was in middle school, she decided to join FHC’s girl’s volleyball team, not expecting anything major to come of it.

But when a Michigan Volleyball Academy (MVA) coach noticed that Brooklyn was the tallest on the court, he asked her to try out for their program. Since then, she hasn’t stopped playing for MVA, and she can’t foresee an end to that journey anytime in the near future.

Only a year after she joined the middle school volleyball team, Brooklyn was grabbing the attention of colleges. Even as an eighth-grader, she had a feeling that she would be committing to a D1 school for volleyball because of the positive relationship she and the sport share.

“I pretty much knew [being signed to a big school] was going to happen,” Brooklyn said. “At the beginning of eighth grade and beginning of freshman year, college coaches could contact me. I was still talking to D1 schools, but then they changed the recruiting rules. So, I could no longer talk to coaches at all until last June on the phone. They could only tell me to come to camps. I didn’t know the full extent until recruiting was opened up.”

Since Brooklyn couldn’t reach out to any coaches until last June, she had no other option but to wait until the end of the month for colleges to start offering her options. Brooklyn would talk to the coaches for hours at a time every day during summer break. From there, she narrowed down her choices, and from the start, Clemson University was near the top of her list. At the end of June, they presented her with an offer.

“I didn’t accept their offer until October,” Brooklyn said. “I was very nervous because it’d been six months since I got the offer. I was just [thinking], ‘Am I making the right decision?’ My parents never really wanted to be super [involved] in recruiting, so they were very much like, ‘It’s your own decision.’ I was very nervous that I wasn’t making the right decision; I don’t think there really was a wrong decision, but I think I was super nervous. I had to talk to the head coach and [say] ‘I think I’m ready to commit.’”

Since October, Brooklyn has been officially committed to playing volleyball at Clemson, a D1 school. The gut-feeling Brooklyn had in middle school turned out to be true. Though she is content with her decision, for a while, she was considering schools from the Power Five, Big 10, ACC, Big 12, and PAC 12.

“I talked to Michigan, Michigan State, and a lot of those types of schools,” Brooklyn said. “I always loved Clemson for the school. They have a great staff and [academics], and the school is great. There wasn’t a bad option, but I just liked it the most. I was more pushed to go there, [and when] I visited, I was like ‘I love this place.’ So, I just decided to commit there.”

Although Brooklyn considered a few in-state schools, she loved the prospect of going out of state. Clemson checked a lot of boxes for her, with it’s large population and high academics, a combination that isn’t always easy to find.

Another big selling point of Clemson’s was the demeanor of their volleyball coaches. Brooklyn found them to be very understanding and kind.

“[This past year was] a really hard year for recruiting,” Brooklyn said. “[The coaches] were always upfront with me about everything that was going on. They’re good coaches; they know what they’re talking about. They’re funny, nice, and I feel like that’s a big thing for me.”

Her volleyball coaches in the past have always been there to keep Brooklyn in check, though she also holds herself accountable. Without their help and guidance, Brooklyn would not be where she is today, and all the opportunities she’s been offered would not exist.

“I’ve grown as a person so much because of my coaches and playing a sport at such a high level,” Brooklyn said. “I keep myself accountable both in athletics and school because they say athletes ‘don’t have to worry about school if you’re committed to a school.’ But, my college coaches, they still hold me accountable. They want me to have good grades. They don’t want to have to worry about me not being able to go to college. It’s a lot to handle, and I feel I’ve just grown a lot from it.”

Her coaches weren’t the only ones who have influenced Brooklyn for the better. Her teammates have been there to help sculpt Brooklyn into the astounding volleyball player she is known as now.

“Honestly, I would not be the person I am now without playing volleyball,” Brooklyn said. “I’ve met so many people I would never have met. I would not be doing the same thing that I am doing now. I would not be going to the same college I’m going to now. It’s really changed me as a person and helped me because when I started playing in middle school, like seventh grade, [I wasn’t] really the same person; [I] didn’t really develop [my] real personality [until later].”

Since the commitment, Brooklyn can’t pinpoint her exact emotion. All she knows is that she’s excited, but there’s another element about the commitment as a junior that sways the bridge a little.

“It’s definitely a weird feeling,” Brooklyn said. “I never really talked about it with any of my friends or anything. So, I was like, ‘Yeah, I committed,’ and they were like, ‘What?’ They knew it was happening, but they didn’t really know anything specific. So, it was definitely very weird to have people coming up to me in the halls saying congratulations.”

Despite what she’s feeling, the excitement factor will always override the temporary ones.

“I’m definitely super excited because I like volleyball, especially challenge,” Brooklyn said. “Playing against a good opponent is probably my favorite thing. Not every team that I play is going to be an amazing team, but when we play teams that I know are very good, I just feel super motivated to play my best and just kind of show off.”

In the fall of 2022, Brooklyn will have already graduated from Forest Hills Central and will be on the court as eager as ever.

“I’m so excited to be in a gym full of players who are just as committed to it as I am,” Brooklyn said, “and they all obviously are there for the same reason.”