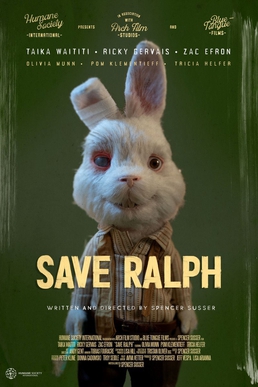 Save Ralph, the animated documentary released by the Humane Society to spread awareness about animal testing

Turns out, a beauty product being “tested on animals” doesn’t mean applying the product on the animal to replicate how a human might react.

In the animated documentary, Ralph explains how his job has ruined his sight and details the physical wounds that he lives with as a result of the testing that’s been done on him. As the video closes, the message states “no animal should die and suffer in the name of beauty.”

Since 2012, “cruelty-free” has been a familiar phrase printed on labels, but it seems that many of these every-day products aren’t as humane as they claim to be. Ensuring that products are safe for humans shouldn’t come at the cost of damaging animals, not even when the product appears effective and ideal.

It’s been brought to many people’s attention—myself included—that many of the products they use aren’t actually cruelty-free. I do believe that if someone unintentionally uses one of these products, it shouldn’t decimate their reputations. It can be hard switching products at the blink of an eye, especially if you were under a different assumption about the products morality.

The problem with filtering out brands that test on animals is that people will throw away the product the moment they find out. While this makes a definitive statement, it has no impact on the company as the money has already been spent.

So the question is why do people care now when it’s been happening for years? Since “Save Ralph” has gained traction, people are finally seeing the long-term effects of animal testing and grasping the gravity of the situation. I would most likely not be as aware of this problem as I am not that I’ve seen the video.

So how do you know which brands are cruelty-free? A simple search on the internet can tell you if your brand is a safe bet. PETA has posted a list of many cosmetic brands that test on animals as well as great replacements.

The effectiveness of an advertisement often influences the media’s opinion on the topic, prompting certain techniques in advertising. According to Ivan Morales, the editorial director of Cine Premiere, “Usually these types of campaigns are aggressive and try to strike with shocking and crude images. This is a different approach and perhaps that is why it has also been so successful in terms of its dissemination” (Why Save Ralph Went Viral).

On top of the ethical issues that surround animal testing, it is also an ineffective practice. From Cruelty-Free International, “Humans and animals have different genetic makeups, and humans are more prone to diseases such as Schizophrenia, HIV, and heart diseases” (Arguments Against Animal Testing). While these diseases are often induced in animals to mimic the composition of a human, they are very insignificant in the actual testing of the item.

Rabbits aren’t the only animals that get tested on. Dogs, cats, hamsters, monkeys, and many get tested through drug, chemical, and cosmetic testing. According to PETA, more than 800 laboratories are bypassing the limited action Animal Welfare Act (AWA) to experiment on these animals (Animal Experimentation Statistics).

Taking even little steps to help improve the humanity of animals can make a difference in the long run. By throwing away a product you once thought was cruelty-free and creating more waste, you can switch to a different brand that agrees with your views. Performative activism might be the trend in recent social upbringings, but it doesn’t have to be for show any longer.