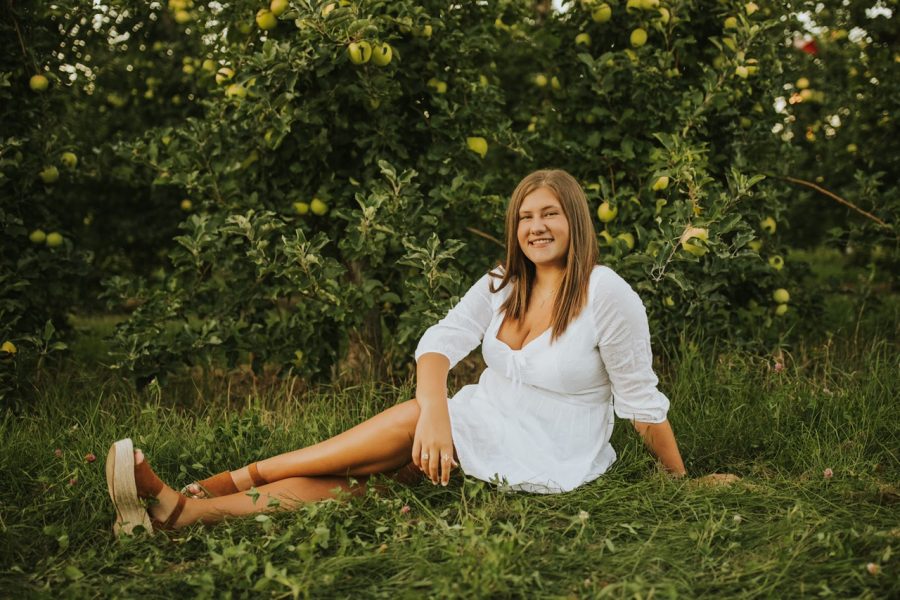 Senior Chloe Teliczan is still unsure what her future will bring her.

Having narrowed down her college choices to Western Michigan University and Ferris State University, Chloe is still trying to figure out where she will be attending this fall.

“My dad did his masters at Ferris,” Chloe said. “ I was maybe just going to follow after my dad’s footsteps. I also have a friend that’s going [to Ferris]. If I wind up [there], I’m going to end up rooming with her, so that’s also something that’s making me want to go to Ferris more than Western.”

Whatever her choice ends up being, Chloe is hoping to go into something to do with business—specifically marketing.

“I’ve taken a couple of business classes over my years of high school,” Chloe said, “and I really enjoyed them. In Intro To Business, we were all assigned a role in our business. I was assigned marketing, so I kind of got the feel for what [marketing] was like, and I really enjoyed it.”

By taking these classes to find out what interested her, Chloe felt prepared for college and life after high school.

Chloe is close to some younger people in her life, and she hopes to share with them some of the experiences and lessons she’s learned as she has gone through her high school career in preparation for college.

“I like having a lot of people to talk to and seeing how other people’s lives are like compared to mine,” Chloe said. “I have a lot of younger friends, and I just cherish those friendships because seeing people my age all the time feels like [we have] similar lifestyles. I guess I’m able to point them in the right direction and [guide them in how] they should prepare themselves.”

She has had the experience to meet new people of all ages through her job at Nonna’s in downtown Ada.

Though working during the school year is not something that most students can handle between sports and schoolwork, Chloe believes it has toughened her up for what’s to come in the future.

“[I tell myself I need to] have a hard work ethic and don’t give up,” Chloe said, “because even in school and out of school when you’re trying to finish things, it’s [going to be] hard to keep that drive. I kept telling myself, ‘You’re not going to get senioritis, you’re not going to get senioritis,’ but these last couple of weeks have been so hard making sure I get all my work done and in on time, and I’m joining my Zooms and being on time to class”

Reflecting on all that she has done and experienced in high school, Chloe is glad that she has had opportunities such as participating in sports to build a foundation of friends that she can not only be an older mentor to but also have fun times with.

“I’m glad I participated in a sport,” Chloe said. “I thought about not playing basketball this season, but I would miss my teammates too much, and I didn’t want to miss out on the opportunity. I knew I wasn’t going to play basketball in college, so I was like, why not just do one more year?”

Chloe has had a high school career full of wonderful classes, rigorous sports, and a great job. Despite all this, Chloe still wishes that she took more chances to be involved in the school atmosphere when she could.

“Do as much as you can because once the time is up,” Chloe said, “there’s no chance of doing things you missed out on. I was watching our [High School Musical: The Musical], and a lot of seniors made a broad decision [to] put in work to be in the [it], and I kind of wish I would’ve done something like that.”

Instead of sitting in her regrets, Chloe wants to make sure that every underclassman lives up their high school years to their fullest potential. From four years of learning experiences, Chloe says to take every opportunity and enjoy it.

“You might not have another chance to [experience something] in the future,” Chloe said, “so take the chances when you can.”