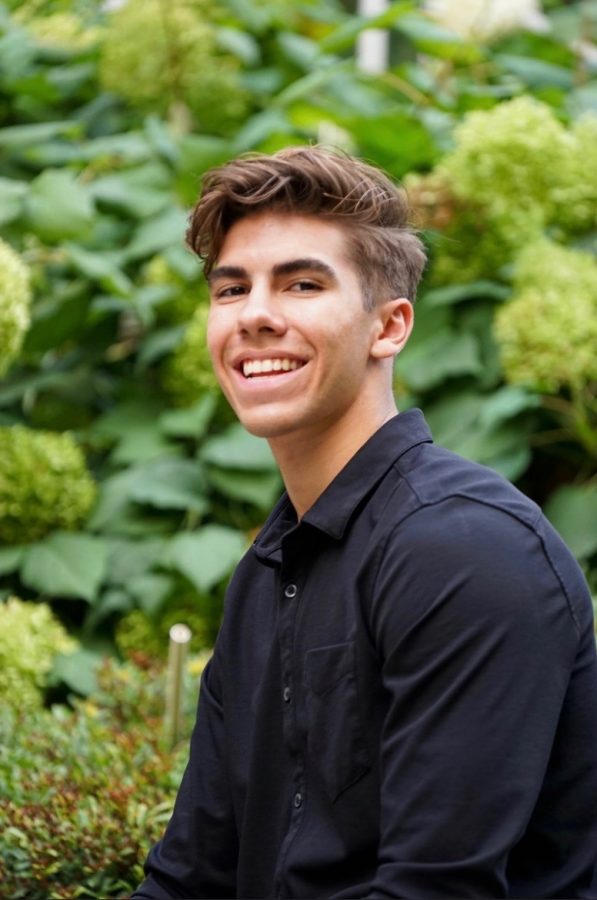 Luke Matelic smiles for the camera.

If you were a part of the audience for the Random Acts of Talent show, you are sure to have heard the name of senior Luke Matelic.

Luke taught himself to play piano at the early age of seven, and within that, he discovered a new passion that will follow him for the rest of his life: music.

“I’ve had a piano in my house for as long as I can remember,” Luke said. “It just became the one thing that I loved doing more than anything else.”

Since then, Luke has wanted nothing more than to pursue a career in music. While little kids dreamt of becoming astronauts or teachers, Luke yearned to be behind the piano, sharing his music with the world.

“If I could have my dream come true,” Luke said, “I would love to work in the music industry after college. I’d love to be a music producer, so [I would be] composing for people and producing beats for people; that would be awesome.”

This past year has given Luke a chance to take a large step towards his dreams and start to work on what he had always thought of as an impossibility into his new reality.

“Before quarantine, I had never actually made my own beats.” Luke said, “During quarantine, I started getting on GarageBand and just spent tons of hours on it. [I would make around thirty] over the course of a few weeks, and that’s when I figured out ‘I could probably do this; it’s not as hard as it looks.’”

Luckily, Luke has a group of friends that support his passion as he shares his beats, ideas, and hopes with them. Although he and his friends meet to discuss music, they try to keep it individual and relaxed.

“It’s never too serious,” Luke said, “We’re just trying to have fun with it.”

Not only has Luke taken the step into making his own music and getting a glimpse into the life of music-making, but he’s also decided to make his dreams the main priority in his life.

“I’m going to major in a business-related field,” Luke said. “I’m trying to get a business degree, and then I’m hoping to intern with a producer that I met this year in Detroit.”

Once he attends the University of Michigan, he hopes to receive an internship where he can develop his business and music skills. While spending the four years in college, Luke fully plans to continue making music whenever he has the chance. He even plans on creating a multimedia website with his friend, senior Jonah Spates, an idea that is likely to happen due to the two years of editing and film that FX gave him.

“I really didn’t know anything about film,” Luke said, “but, I took Media [Communications] sophomore year. It’s a fun class; I just started to love editing and film. Last year, I didn’t take FX because I had a pretty busy schedule, but I took it this year, and it’s probably my favorite class.”

Luke loves being able to work with a large group of students to create fun, new videos that others can view and enjoy.

“I love being in the control room; [ it’s similar to a team sport],” Luke said. “Everyone needs to do their job perfectly to put on a perfect show every day. I think it’s really rewarding when everyone does their job and it comes together perfectly.”

In order to fully focus on his new plans, Luke may have to give up some of the more prominent parts of his life over the past years: sports.

Luke has played both football and lacrosse his whole life. This year, though, whether he will continue to play is a question that has yet to be answered.

“I might try to walk on the team at Michigan,” Luke said. “Our lacrosse team at our school is really good, so compared to other players, I don’t know how to gauge how I would look. But that would be something cool to do, just to try something new out.”

These sports have held many memories for him, but one of the dearest ones to him was the first time he had any longing to step on the field and give lacrosse a try.

“In 2010, my brother, Zach, won the lacrosse state championship in his senior year of high school,” Luke said. “Watching him play was the coolest thing ever. I felt so cool that my brother was on that team, and I played baseball at the time, but after I saw [that game], I quit baseball and started playing lacrosse.”

Luke was able to follow in his brother’s footsteps by winning the state championship in his sophomore year, a fact that he will remember fondly for the rest of his life.

Despite all these memories and the years Luke has spent working on the field, he holds no regrets if his path leads him away from sports for good.

“Even if you do go on to play sports at the next level, you can’t have that forever,” Luke said. “Eventually, your body just gives in. I like that I’m starting to focus on something I can do for the rest of my life.”

Luke is grateful that he has finally taken his previously seemingly impossible ideas and transformed them into a potential career for himself.

Although quarantine was an amazing experience for him as he learned the ins and outs of music-making and started wondering whether he could take his hobbies further, he wishes he took initiative sooner.

“I wish I had done some theatre in high school [and that] I would have taken FX [my] junior year,” Luke said. “I was super focused on academics. A lot of people’s regret is that they didn’t try harder in school, but my regret is that I didn’t take a break.”

Luke plans to take what he has been able to learn within the past four years of high school and begin to transform his dreams into his future.

“Everyone has a dream when they’re little of being a rock star, in the NFL, or becoming president,” Luke said. “Well, [my dream] my whole life was that ‘I wanted to be a musician,’ but it definitely wasn’t until quarantine that I made the decision.”