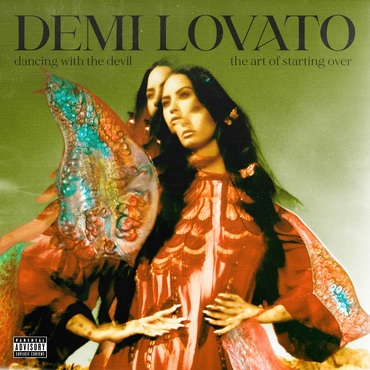 Demi Lovato's cover for an album more powerful than anything I've ever heard.

For a while, Camp Rock was my all-time favorite movie. I loved how fun the music was and imagined that I would, one day, go to a summer camp just like it. My younger self, just like every other girl, had aspirations of becoming a singer when they grew older. Now that I’m a few years shy of debating what career I want to pursue, I think it’s best that I leave singing up to the professionals such as Lovato.

Over a decade later from the release date of her first album Don’t Forget, Lovato has taken the world by storm many times with her astounding vocals and gifted talent. At age twenty-eight, Lovato has released seven studio albums with her newest one titled Dancing With The Devil…The Art of Starting Over. Lovato’s album, released on April 2, 2021, is connected to the YouTube Originals’ documentary, Demi Lovato: Dancing With The Devil. Her album and the documentary both unhinge what Lovato’s life was like after her near-fatal overdose back in 2018.

Dancing With The Devil…The Art of Starting Over exceeds my expectations for a pop album. Lovato poured her heart and soul into her seventh album, as she recounts her life in the spotlight that’s been everything but enchanting. Everything before her near-fatal overdose to now, she is finding ways to overcome her past and grow, hence the album title.

This is Lovato’s first album since her overdose. She released her single, Sober, but it didn’t encapsulate the full effect of her resilience and strength. Dancing With The Devil…The Art of Starting Over, however, proves just how one can go from an awful state of mind to rebuilding one’s life and shaping a better one for the future.

Interestingly, Lovato’s album starts with three songs before the official introduction: “Anyone,” “Dancing With The Devil,” and “ICU (Madison’s Lullabye).” These three songs before “Intro” were a way for the listeners to get her motive beforehand. So, the rest of the album makes sense, just like the prologue for a book.

“I asked if anyone could hear me / As I danced with the devil / And because of that I was blind but now I see / Let me take you on a journey / One that sheds the skin of my past / And embodies the person I am today / This is the Art of Starting Over.” These are the lyrics from “Intro.” Out of all the songs I’ve heard in nearly fifteen years of my existence, “Intro” is one that I heard once and immediately understood the message–I also started rethinking a lot too. From “Intro” on out, this message is greatly conveyed.

“California Sober,” for example, has powerful lyrics to go with her theme: “Healing got me lookin’ for freedom / Happiness it used to be fleeting / History was always repeating / Not anymore / I’m California Sober / It doesn’t mean the growin’ part is over.” In these lyrics, Lovato is saying how healing has her feeling free and the best she’s felt in some time, while still growing from her mistakes. The rest of the song is Lovato realizing just how good it feels to not have a world dictated by substances and other awful influences.

The song from Dancing With The Devil…The Art of Starting Over that portrays her motive the best is “Good Place.” Lovato sings about how much time, pain, effort, and ups and downs it took to be in a good place. She recognizes her mistakes that have been hurting her, and now they’re holding her accountable through the proper care and help she needs.

Though Lovato may not be as popular amongst the younger generation as she used to be, the influential message behind Dancing With The Devil…The Art of Starting Over is one to understand now in order for the future to be full of wise decisions.