Katie Tellier found both a community and herself at FHC 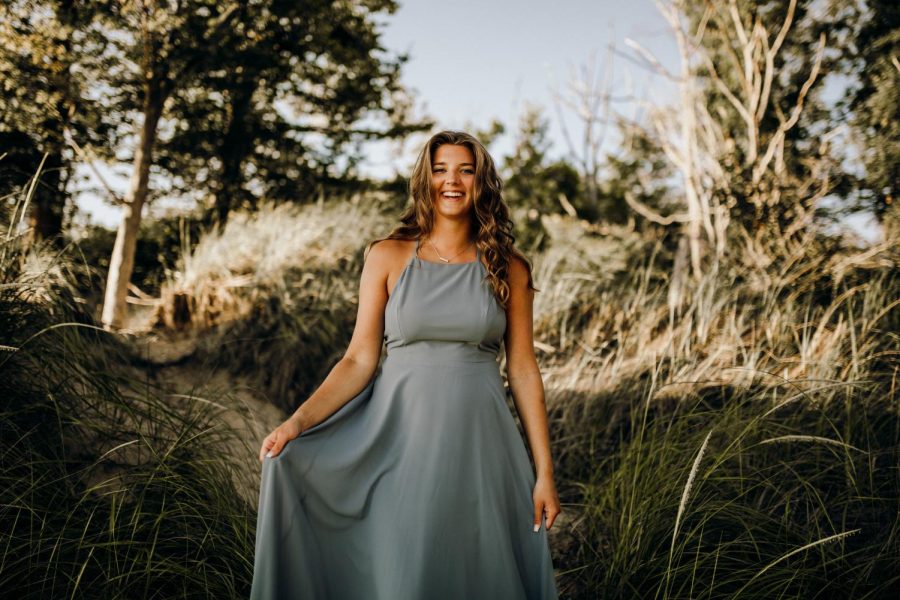 And although Katie so eagerly wants to look forward, the email regarding our waning days in the building was a bombshell; with such an unpredictable senior year, it should not have come as any shock, but it was.

For Katie, who had numerous events planned for the last week of school before the schedule change, it was.

“So [Monday] night was rough,” Katie said. “It just kind of hit me, and I was sobbing. We’ve been stripped of so many things this year that [it] just feels like one more thing. While so many people are like, ‘Oh, we’re done; this is so great,’ I wanted closure. I had so many things planned, but I’m not going to be here, so I can’t do those things anymore. And I wanted to say goodbye to so many different people who, I mean, I just won’t see. ”

The news of the schedule change was particularly profound because, as a transfer student, Katie did not grow up with the friends she has now; however, that experience has taught her to cherish every memory she has—even if it wasn’t always like High School Musical.

“I romanticized what this place would be,” Katie said. “Coming in, I hit a little bit of a wall. I was like, ‘Okay, so this isn’t like High School Musical; there’s no singing or dancing on top of tables.’”

Spending countless hours poring over open textbooks—some nights crying, other not—Katie’s undeniable work ethic moved mountains, and while she wasn’t always dancing or singing like a character in a musical, she was working, for that mattered most.

“I am such a high standard type of person,” Katie said. “I want things done to a certain level or a certain degree. And so coming into [FHC], I would stay up until ungodly hours of the night, just trying to get my work done. My first two years were pretty difficult just because I wanted to meet that standard and everything.”

Planning on pursuing a Pre-Med track at Michigan State University in the fall, Katie’s diligence throughout high school lead her to that path—although, for a period of time, she did not see herself studying at MSU at all.

With both her parents and grandparents as MSU alumni, Katie felt a bit of familial pressure to attend and naturally wanted to break the cycle; however, after visiting the campus this fall and immersing herself in the Lyman Briggs College community, she decided that it was a perfect fit after all.

“[MSU was originally] the last place that I wanted to go,” Katie said. “I wanted something different and, I mean, I’ve heard so many different times, that everybody from [FHC] just goes to MSU. I just wanted something new, I guess. But I found a program there that I really love—I’m going to be in the Lyman Briggs STEM College, which is just kind of a smaller residence; it has 600 [students]. So it’ll be a smaller college experience within the bigger university, so I’m excited for that.”

Still unsure exactly what she will specialize in, Katie has narrowed it down to either orthopedics, oncology, or neurology—whatever she does, though, she knows she simply wants to help people. With a multitude of unpleasant hospital and doctor visits from her numerous injuries throughout high school, Katie wants her future patients to feel the complete opposite of that.

And her strong work ethic paired with her extremely empathetic nature will ensure success in whatever field she ends up studying.

“What I honestly hope to accomplish is to make every single patient who comes into my office satisfied and helped,” Katie said. “In so many situations I wasn’t, and that’s why I got injured so many times because it just kept happening. I hope to be the person who finds the help for people who come in and were like me. I really want to be not only just a doctor, but somebody who empathizes with the stress that surrounds those situations and everything else that can come into those.”

Pulling inspiration from her own teachers who have supported her in every endeavor throughout high school, Katie hopes to be that sense of support and sympathy.

She owes a lot of her success and inspiration to Mr. Pierce, especially, who she had both freshman and senior year.

“Mr. Pierce has just been like my best buddy,” Katie said. “He’s just been a little bit of my stronghold while I’ve been here. I could walk into his classroom no matter what, and he would yell at me, but then he would also listen to me as well. He’s always known that I push myself to a certain standard, and if I’ve ever been in a place where I couldn’t do that, he would push me or help me get back to a place where I could.”

With such strong bonds with her teachers and her friends—and the entire FHC community as a whole—this upcoming goodbye will be especially difficult, one that she has shed her fair share of tears over.

Because, for Katie, the amount of personal growth that she has experienced the past four years cannot be measured or counted like the number of tests she has taken or the number of times she has walked into Mr. Pierce’s room.

Walking out of the doors for the final time will be her ode to how far she has come since freshman year, and how much farther she will go at MSU and beyond.

“I don’t want to cry. I don’t want to—I might, but it’s okay,” said Katie, who apologized profusely for getting teary-eyed, to which I reassured her it was completely fine. “I’m thinking back over everything that I went through—freshman year was tough. [I want to tell freshman-year me] to stay the course and that no matter how hard it gets, it’ll get better. I’m so much happier in life and everything is really looking up for me. [I wish I could tell her that] it’s just school. Like it’s just school, it’s not life or death situations. It gets better. I mean, look at where I am now.”