Olivia Rodrigo’s new song, “deja vu,” illustrates old and unrequited feelings that have yet to fade 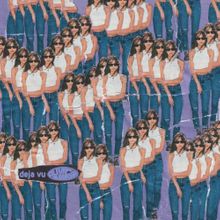 The cover for Rodrigo's newest single, "deja vu," from her album SOUR, which is set to be released on May 21, 2021

Olivia Rodrigo is famously known for her single hit, “drivers license,” which was released in early January. At the time, I questioned why the song started to grow in popularity; I was not a fan of it, and I found it genuinely annoying.

I recognized the young singer’s name from my days of watching Disney shows. Rodrigo starred in Bizaardvark, where she played one of the main characters: Paige Olvera. She also played the titular role of Grace in American Girl’s 2015 movie, Grace Stirs Up Success. Most recently, Rodrigo gained attention in the Disney Plus original, High School Musical: The Musical – The Series.

Overall, I am blown away by how much this eighteen-year-old has accomplished. Even though I was not a fan of Rodrigo in the beginning, her most recent single might have changed that.

“Deja vu” is an easy-going, beautiful, and serene piece, and it was a dream to listen to. As it played, I could feel the strong emotions Rodrigo was conveying towards an anonymous ex, feelings of honesty as well as a little jealousy.

In the song, Rodrigo questions whether her anonymous ex will tell his new partner the truth about himself. She calls out what may be a fake facade in her beautifully crafted lyrics. “So when you gonna tell her that we did that too?//She thinks it’s special, but it’s all reused.” Rodrigo knows the game that’s being played a little too well.

Since Rodrigo continues to write music about heartache and loss, it’s clear that she’s processing unresolved feelings of hurt and abandonment. Considering that Rodrigo may have had a relationship with actor and singer Joshua Bassett, there was an added thrill of knowing that this song may or may not have been another message for him.

I can also only assume that a few lines reference singer and actress Sabrina Carpenter. “Do you call her, almost say my name?//’Cause let’s be honest, we kinda’ do sound the same//Another actress//I hate to think that I was just your type.” If “driver’s license” is anything to go off of, Rodrigo is likely making another petty dig at Carpenter. Many fans assumed that she was “that blonde girl” whom Rodrigo mentioned in “drivers license,” so the same can be rightfully assumed about “deja vu.”

As Rodrigo gave more examples of the eerily similar appreciation her ex is showing his new girlfriend, the mood stayed consistent, and I was able to vibe alongside the tempo.

Currently ranked number two in Rodrigo’s top hits on Spotify, “deja vu” has decidedly rendered me beyond thrilled to hear what her music will bring in the future.