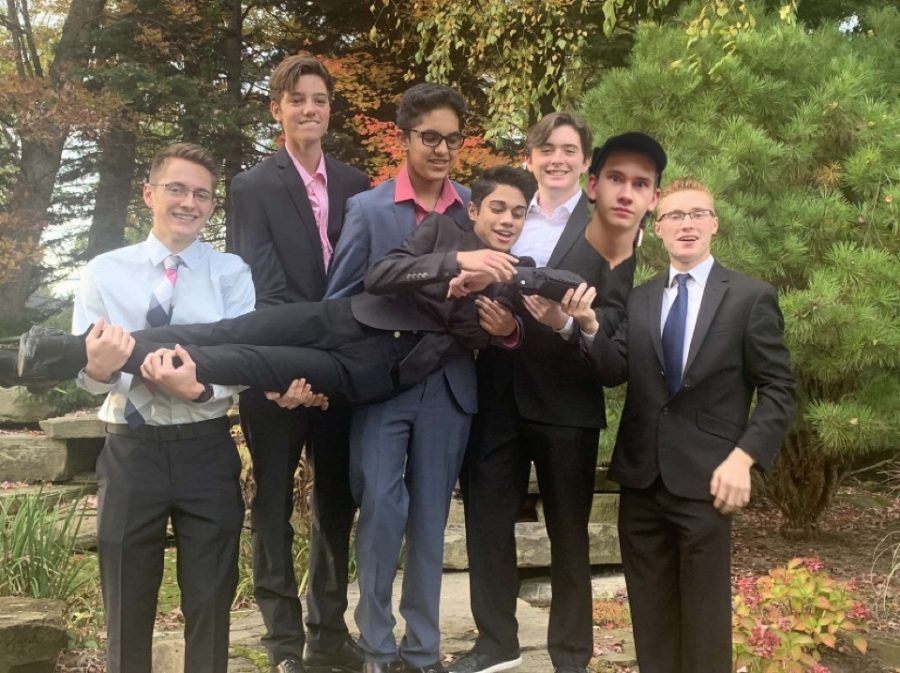 Daniel lying in the arms of his closest friends

Moving more than 9,000 miles away from his childhood home in Malaysia, senior Daniel Suraj experienced a considerable culture shock at the mere age of 12.

Daniel moved to Michigan with enough time to enroll at Central Woodlands. The major change in Daniel’s lifestyle made it difficult to adjust at first, but his ability to form strong friendships helped with the transition—friendships that would last for years to come.

Daniel did not meet all of his current friends at once, but they have stuck together through thick and thin.

“I met Furzaan [Abidi] in sixth grade,” Daniel said, “and then I met some of the other guys, specifically Nick Stockenauer, in seventh grade. But, it wasn’t until eighth grade [that] we all really got to know each other.”

When Daniel and his friends all got placed with the same ACE teacher in eighth grade, it became the start of an inseparable friendship they would develop even further in high school.

Daniel and his friends had a bit of a rocky start—freshman year was nothing short of distant for the group at times—but that distance amplified their relationship when they reconnected their sophomore year in the Film Projects class taught by Jeff Manders.

“Sophomore year is when it started clicking again,” Daniel said. “Nic Tilley, Nick Stockenauer, and Josh Ackerman and [I] were all in the same film group. We hung out a lot for filming [which led to hanging out] in the summer.”

Though filming brought the boys closer together, going through the challenges of junior year put the icing on the cake.

Going into junior year, Daniel knew he would face roadblocks that would be difficult to overcome: looking into college, preparing for standardized tests, and all the typical problems that junior year holds. However, the additional obstacles caused by COVID-19 were not going to stop Daniel from enjoying high school with his friends.

Daniel and his friends found ways to stay in touch with each other, and they didn’t let the health restrictions stop them from growing closer. Even in the tough times, they all encouraged each other to keep moving forward.

“[They’ve] been the backbone of my support in the sense of helping me see the bright side of things in some aspects,” Daniel said. “If someone needs help, we’re all there for them. And that’s just been a constant thing, especially in the past year. Last year, and now this year because of COVID, we get the bond online and outside depending on [weather].”

The boys found many ways to stay connected outside of school, but there was only so much that they could do. They’ve spent years supporting each other, but they have encouraged each other even more during their senior year.

“[English teacher Robbin] DeMeester asked me to join the musical this year,” Daniel said. “I really wasn’t too lenient on doing it because my grades weren’t the best. She also asked Nick Stockenauer, and Stockenauer came up to me and said, ‘Daniel, you know, I think I’m going to do it.’ So I’m like, all right, sure. I’ll give it a shot, too.”

Seeing as it is their last year of high school, Daniel is grateful that his friends encouraged him to make the most of it.

Though Nick initially convinced Daniel to join the musical cast, Josh’s involvement in theater gave Daniel a way to spend time with even more of his friends.

“I knew Josh was going to be on crew,” Daniel said, “so I just gave it a shot and got to play Jack Scott. That was a really fun process, and I do not have regrets about that peer pressure. It was really great.”

The friends that Daniel has made since he moved to Michigan have profusely influenced him into the best high school experience he could ask for, and he believes everyone deserves friends like that.

“Don’t be afraid to go talk to people just because they might scare you,” Daniel said. “Some people may have the biggest heart, even though they might not look like it. I can tell you from experience, we got a couple of people in our group like that, but that’s what makes the dynamic so great.”