The Disney Plus series Big Shot has the potential for greatness 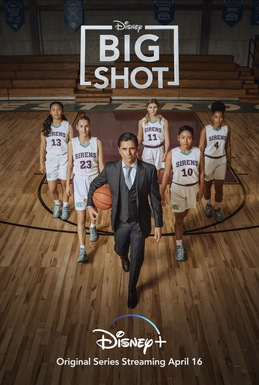 John Stamos is staring in the new Disney Plus Original series, Big Shot, and honestly, I think it could quite possibly have the potential to become a modern-day classic Disney series.

The series pilot episode was released on April 16, 2021, and the rest of the episodes will be released onto the Disney Plus platform weekly on Fridays.

In a nutshell, Big Shot is a story following basketball coach Marvin Korn (John Stamos) on his journey from being fired from coaching men’s college basketball to eventually finding his way back into the big leagues. This process first involves coaching a high school girls basketball team, at which Marvin is less than thrilled.

As a kid who grew up watching TV shows like Full House and the spin-off, Fuller House, Stamos is an actor who I have grown up seeing in many shows. I have to say, I had higher expectations for this series considering how experienced Stamos is in the world of Hollywood acting, but I quickly overlooked it as the episode went on.

The impeccable acting and movie-making talent was there, but Stamos just seemed out of place portraying the role as a high school basketball coach—I guess that could be how the writers wanted to make it seem to the audience, though.

Despite technically being a Disney show, I was surprisingly captivated by the antics and plot of the series. Many little quirky remarks and borderline-adult jokes were snuck into the script very well.

Along with that, I was surprised by how deep some of the topics were for a Disney show, considering their usual lighthearted theme. I think this is one of the elements that kept me, a teenager, engaged in the show. It definitely checked the box for being a wholesome film.

I also enjoyed that the episode had an extensive mixture of drama, sports, comedy, and action—a combo that makes for a well-put-together concept.

For this being simply the pilot episode, I felt like I just saw a complete movie. Obviously, a few plot holes here and there would stick out if the series ended there, but I think it wrapped itself up pretty well after the single episode.

However, this could also be counted as a flaw of the pilot episode. The goal of a pilot should be to draw the audience into the show, get them attached to the characters, and build the momentum for the rest of the season, but that wasn’t incredibly obvious to me.

Regardless of this, I will most likely watch more episodes just to see where the storyline goes.

My biggest fear for this series’s success is that it will fall into a too-familiar form and result in a typical cliche outcome.

What I could gather from the pilot episode of Big Shot is that it is a show that has the potential to be really classy, as long as it doesn’t get too carried away with the typical ‘egotistical coach learns to be down to earth and leads misfit girls basketball to the championship’ plot.