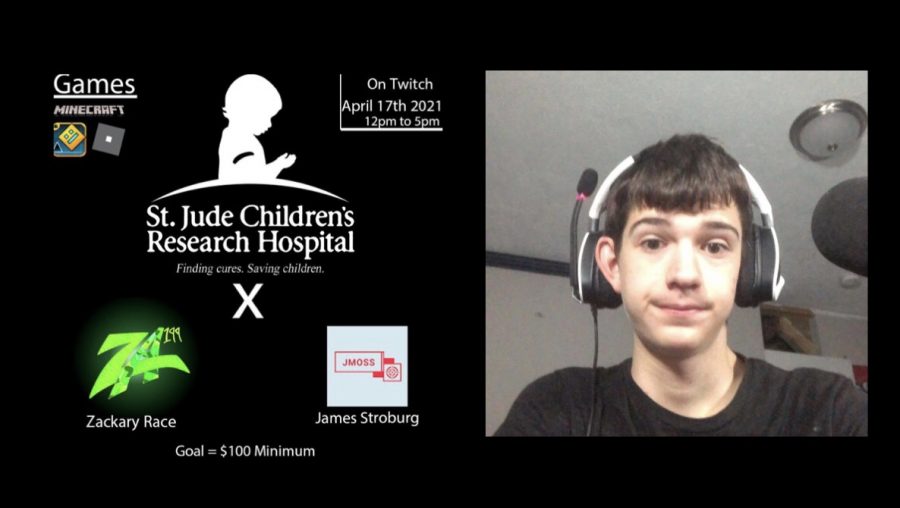 Freshman Zack Race took something that he loves and turned it into something other people would benefit from.

After gathering a respectable amount of followers on YouTube and Twitch, Zack decided to spice up his regular use of the apps. Zack and one of his close friends, freshman James Strober, came up with the idea to raise money for children with cancer at St. Jude’s Children’s Research Hospital by having a stream that went on for hours, allowing people to donate to their cause.

“St. Jude’s is a beautiful hospital,” Zack said, “and thanks to all the donations that people like us give, children can get their treatments. My friend and I just had that idea one night. I’m like, ‘You know what? Sure. Let’s raise some money. Let’s do that this weekend.’ We weren’t really expecting a whole lot from it, but we actually raised way more than we originally thought. It’s  actually kind of insane to think back on.”

Zack is really proud of the experience, and he feels like it’s something he could make a regular occurrence of. Raising this money was an amazing act of kindness but also meant so much more.

Along with being a terrific way to raise money, it was a fun experience for Zack. He was able to branch out from the typical uses of Twitch while having fun interacting with the people who joined the stream.

Of course, it was especially fun when some of his friends joined.

“One of my close friends was very proud of me for raising the money and doing all this,” Zack said, “and that felt really good. Because when I told her that I [was] doing a charity stream, she, of course, thought it was cool, but the actual action of going through with [the stream] made everyone being proud even better. Many of my other friends were also extremely supportive of it all. So that was a very amazing feeling [when] everyone cheered us on.”

For Zack, nothing compares to the feeling of his parents being proud of him, so when he reached his goal of money raised, going upstairs to tell his parents was one of the first things on his mind.

“When we reached [one] hundred dollars, I went upstairs almost immediately to show my mom,” Zack said. “Her reaction was great to see because I didn’t truly expect this whole thing to take off very much. After I got done showing my mom, my dad actually walked in, so of course, I showed him the results as well, and he equally was shocked. Aside from being surprised that we had reached a goal, there was mostly an overwhelming feeling of pride.”

Due to the overwhelming success of Zack’s first ever stream, he has hopes of making this a monthly occurrence.

Zack feels that if you have something you enjoy that has the potential to help others, there is no reason not to go after it. This started out as a random idea that could have easily fallen through, but Zack’s determination to make the stream happen turned it into a major success.

“If you have the opportunity to do something like this, don’t hesitate,” Zack said, “Just go after it because you never know—it could turn out amazing.”