The Central Trend • May 3, 2021 • https://thecentraltrend.com/101118/opinion/universal-studioss-new-edition-to-their-park-had-me-relive-my-childhood-memories-and-make-new-ones/ 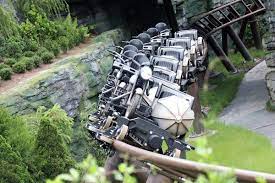 Not only did Universal Studios—a famous amusement park in Orlando, Florida—reopen their parks not shy of a year ago, but with this, came new attractions.

Though the typical Mardi Gras celebration ends in March, Universal extended their festival with colorful parade floats spread throughout the parks and pearl beads strewn across the streets. These festivities made the trip to Universal all the more exciting, as I hadn’t been expecting the ornate transformation.

Universal also set a variety of vendors out along the pathways to represent different countries as people sampled their most-known foods. Their International Flavors of Carnaval took you through places such as Belgium, Brazil, Canada, and, of course, New Orleans.

I only had the courage to try a classic Cuban sandwich, but was not disappointed when it came out smelling smoky and sweet. It was a beautiful sandwich with a side of plantain chips that I was happy to share with my friend. Although the price was a bit much for the serving size I got, it was reasonable considering I was at Universal.

Staying at Universal Studios was exciting already, but with the added celebration, it was icing on the glorious cake.

Another new addition to the park was Hagrid’s Magical Creatures Motorbike Adventure. This was to replace their Dragon Challenge coaster that is now closed. I was a bit disappointed that the ride I had remembered from when I went in 2016, was shut down and removed, but I had hope for this new adventure.

Now, if you know me, then you’ve probably heard all about my Harry Potter obsession. I was eager to try to get a pass for the virtual queue set up as I rushed around the park.

With Universal’s rules for certain popular rides, they set up a virtual line through their Universal Orlando app for a certain time slot to join. This ride was already very popular and was a difficult process of obtaining a spot.

The effort to get a ticket was hard enough, but waiting in line for the ride was probably even harder. Before I could sigh a breath of relief that I had received one of the limited spots they were handing out, I noticed the line stretching from a different section of the park to the actual ride. Needless to say, the wait in line was over two hours, and standing in the hot sun was not enjoyable.

With the line for fresh iced Butterbeer right outside the enclosed ropes, it was tough not giving up my spot to stand in the cool shade sipping the frozen drink I had come to love.

I wasn’t expecting much for this ride, as I had assumed it would be a ride similar to their Flight of the Hippogriff ride—a mild one intended for younger children. As the line took you deeper and deeper into the grounds of the Hogwarts castle, I could hear the excited screams from people before us.

Personally, the wait was worth every second of the ride.

It seemed a bit odd how the carts were designed—as they were shaped like a motorcycle with a sidecar attached. This concept was strange for me. Because the ride was so vigorous, I expected it to barely hold you in place.

The moment I felt the acceleration on the track kick in, my thoughts on the Incredible Hulk ride being the fastest flew out the door. Now, obviously, the Hulk ride was still faster, but the momentum of being upright while still flying through the track was a good enough illusion to make me believe I was traveling at lightspeed.

There were certainly times where I thought I was about to fly off my motorbike seat when the carts went almost all the way sideways, but somehow, I managed to be intact by the end. The ride had me on my toes the whole time while it would speed up and slow down at random intervals.

This isn’t the only new ride that Universal planned. Their Jurassic World VelociCoaster has been teased for the past couple of months as they continue to run empty carts for people to get excited about their opening in the summer of 2021.

Universal Studios’ new edition to their Wizarding World of Harry Potter was a breathtaking experience that left me wishing it was longer than the three minutes I had been on.

While I can’t wait for their Jurassic World roller coaster to be opened, I have no doubt that it will give the same thrill and excitement that I experienced with their motorbike ride.