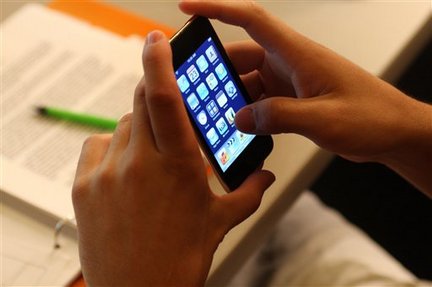 “We went from wires with big bulky desktops to laptops to a wireless fad, and now we’re going back to wires. We’re always charging our phones or devices or connected by the cord of the charge because we’re exhausting the wireless energy so quickly.” –Reagan Cool

The teacher is finished with the day’s lesson, and the rest of the class period is given to students to do what they wish. For many, this means taking out their smartphone to listen to music, check their text messages, snapchat their friends in other classes, or work on homework from their phones. Next year’s eAchieve program asks more questions than it answers, going deep into the morality of what phones are doing to society.

“Technology is wonderful, but we have to make sure that we’re going to be doing it in the right and responsible way,” said Steve Labenz, FHC history teacher.

Technology has progressed at an unmatched speed, leaving cassettes and landline phones in its wake. The ever-increasing majority of students at FHC own smartphones. These students possess devices capable of reaching the Internet, giving them access to a boundless amount of information, all at their disposal. But because of the overall increase of access to technology and its information, youth are spending more time in front of a screen than ever before. Students and teachers generally agree that this increase of “screen-time” among youth is a bad thing.

“I don’t think we need to have kids plopped in front of a screen for more time than what they’re already in front of it for,” Labenz said.

There are arguments to be had about how smartphone technology is affecting youth and adults. These devices are often seen as distracting, but not necessarily a hindrance towards education.

“[Smartphones aren’t making us] dumber, but definitely more distracted, myself included,” said FHC English teacher, Lisa Penninga. “It’s just one of those things where ‘Ooh I can quick look at this!’ or ‘Oh, I have this new app.’”

Some students, like sophomore Sam Ovens, agree. He believes phones can be used for intelligent purposes without taking away from learning, especially in the classroom to enhance education.

“I very often will use my phone to check world events, I use it to study, and I type things on it if I have busywork during school,” Ovens said.

In contrast, Labenz believes smartphone technology is ruining students’ ability to analyze, apply, and synthesize. According to Labenz, there is a general movement towards looking things up quicker and turning to Google. By constantly Googling information, he believes students are surrendering the reason for going to school–which is learning to think.

“You read, you study, you discuss, you press, you question, you learn, rather than ‘Let me Google it,’” Labenz said. “That’s great—facts. Facts are such a base level of learning. We have such access to so much information on those phones, but does that make us necessarily any smarter? If we want to have kids think, I don’t know if phones make them better thinkers.”

Many teachers share concern for the eAchieve program, more commonly known as “bring-your-own-device.” Cell phones can take away from class time, distracting not only the user, but other students as well, which takes away from the overall learning process. Even when used for educational purposes, though, it’s all too easy to cheat and look up the answers. However, there are ways around this.

“I have a phone basket for tests,” Penninga said. “I collect everybody’s phone, and it’s easy because if someone has their phone then it’s easy to tell them, ‘You’re not supposed to have your phone.’”

Cell phone attachment is not only taking away from learning, but is also affecting social and life skills. The constant need to check one’s phone is becoming a problem as students move from the classroom to the workplace. In some ways, phones are ruining interpersonal relations.

“One of the things at my wife’s company is people can’t get along with their employers and coworkers,” Labenz said. “She says when she meets younger applicants, they don’t know how to have a conversation. . . . You have a lot of kids who don’t know how to interact with people.”

Phones are also a distraction to studying for students now.

“[I like to use social media for] procrastinating so I don’t do homework,” said Reagan Cool, FHC sophomore. “I kind of have a screen addiction. No, it’s not okay.”

Phone culture’s progression suggests that studying will only be harder in the future. FHC’s high schoolers may be having trouble staying focused now, which will only get worse as they go off to college and don’t have a looming parent reminding them to stop procrastinating.

“I’m a little bit scared for not necessarily our kids, but our younger siblings and those that are entering the school right now,” Cool said.

The younger generation has grown up with media devices already in existence. There is no “before” for many of these kids—iPhones were invented before they could walk.

“The genie’s out of the bottle for kids,” Labenz said. “You guys are from the cradle now. Kids are immediately ingrained. I guess it’s more about reigning it in than anything at this point.”

Social media, especially, raises questions about how people act in their surroundings now and in the future. It gives one a place to stay in touch and informed about the lives of those they care about, but there are downsides. Penninga has speculated that social media provides a fake world for people to spend time and interact in.

Living through technology hopefully won’t always be the case though. The many opportunities that technology possesses will far outweigh the costs once society can hone it in.

“I believe in the pendulum theory, and I do think at some point it’s going to swing back in the other direction with the realization that an education based around technology isn’t necessarily the highest quality education,” Cool said.

As with all technology, smartphones were designed to make our lives easier. Nonetheless, subjectively negative side effects are a consequence that is beginning to be recognized and acknowledged. Like all ailments, though, Cool believes there will be a cure.

“It’s easy to panic about what’s going to happen in the future, but we also have to trust in our own abilities,” Cool said. “There are a lot of us out there that are panicking at the future, and we’re the people that will do something about it. Not everyone’s just going to sit and watch our society disintegrate in front of us.”