The Central Trend • May 11, 2021 • https://thecentraltrend.com/101369/showcase/josie-crosse-acquires-her-morals-from-harmonizing-three-different-sports-5-11/ 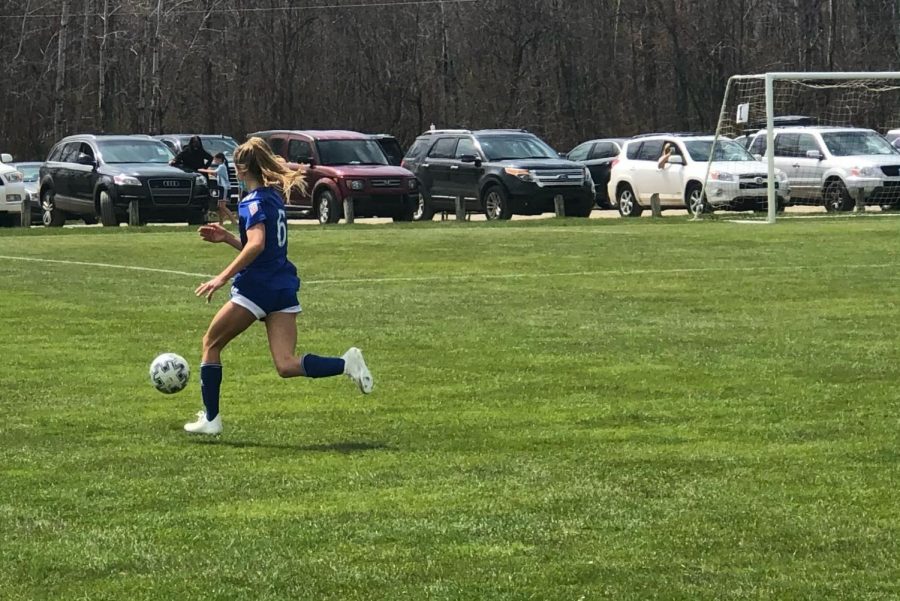 For freshman Josie Crosse, her source of motivation sparks from being the best version of herself she can be. Whether that’s within her favorite sports or life itself, she seeks improvement twenty-four seven.

“Even if you’re not the best at something,” Josie started, “someone is always going to be better than you, and it just depends how hard you’re working; you can always outwork someone—even if they’re better than you. And that can determine everything.”

Through playing both high school sports and a club sport, Josie has learned the importance of unity. She believes that a team is only as strong as its weakest link, and eight years of soccer, one year of tennis, and four years of golf can attest to that.

“Especially for soccer, I don’t want to let my team down,” Josie said. “In tennis, we play doubles, so you have a partner. I just want to work as hard as I can for them and for myself so I can be the best I can be.”

Furthermore, the team aspect is a must for Josie. Especially prevalent in soccer, her favorite thing about being on a team is interacting on the field and all working towards a common goal: a victory for Midwest United.

“I really love playing with my entire team,” Josie said. “I like that it’s a team score. I like running and being out [on] the field with them, and we’re all working hard and just trying to win.”

But as that may be, in Josie’s eyes, she portrays soccer extremely differently from tennis and golf, with one being always actively competitive and the others being enjoyable and easygoing.

“For tennis and golf,” Josie said, “I really just like playing with my friends; it’s not super intense, so it’s more of just something that I can do for fun.”

This mindset stemmed from differentiating middle school sports from high school sports. From being a track runner in seventh and eighth grade to now debating on trying out for the high school soccer team, the discrepancy is clear to Josie.

“I didn’t love track,” Josie said, “but I think [high school sports] are just a little more serious. It’s definitely a team atmosphere too because everyone is working hard to become closer, and you’re going to spend the next four years playing together.”

With Josie’s undeniable dedication to her soccer league, she is unsure of whether to play soccer for FHC. Being torn between the two, Josie decided to stick with Midwest United for her freshman year and readdress it when her sophomore year comes about.

With that dilemma in mind, all she knows is that soccer has always been a constant. With her parents mindlessly signing her up for a league when she was young, Josie adapted and decided that soccer was the sport for her. However, she longed for two extra sports to accompany that one major love. And although they didn’t derive from a passion, both have developed to be close to it.

“For tennis and golf, a couple of my friends were doing it,” Josie said. “I’ve played before so I thought it would be fun to just try. I wanted to play a high school sport, and since I couldn’t really play soccer, it was a fun alternative option.”

All of Josie’s strives for success emanates from her sources of inspiration, one being her soccer coach who always makes sure that Josie is constantly bringing her A-game.

“My coach makes me work hard every day and wants [me] to be the best version of myself I can be and play the hardest that I possibly can,” Josie said. “She’s an inspiration because she also plays soccer; she’s someone to look up to.”

With Josie’s coach being towards the top of her list of idols, close to her Midwest United coach comes her friends, her mom, and dad.

“Seeing my teammates work hard inspires me to work harder,” Josie said, “and my parents inspire me.”

All of these important figures in her life contribute to the person she is today. In regards to sports, academics, and simply just life, Josie holds herself accountable to improvement and liability, especially so within her number one sport.

“In soccer, if I lose the ball, I will just come back on defense and help recover,” Josie said. “With any sport, recovering, working hard, and working at home [is essential]. You have to put the time in by yourself if you want to be good.”