The Central Trend • May 7, 2021 • https://thecentraltrend.com/101456/showcase/alec-stewarts-dedication-to-hockey-has-set-him-on-the-path-of-success/ 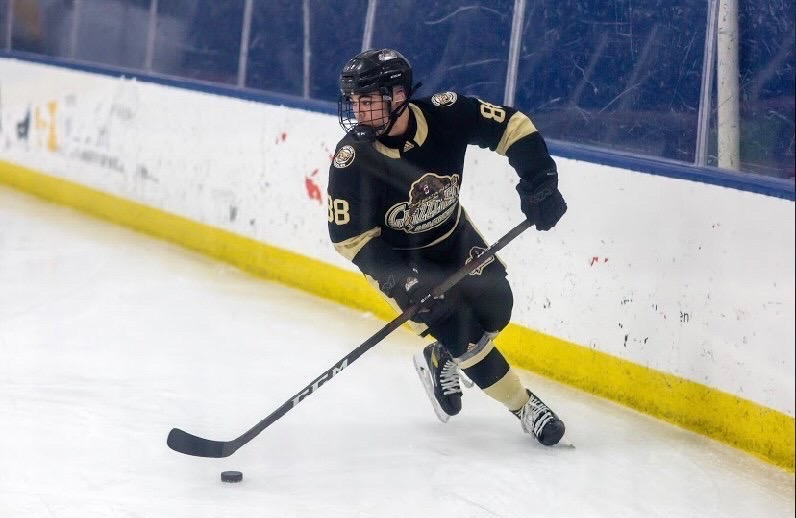 Alec Stewart allows himself growth and development through playing hockey

If you Googled senior Alec Stewart, it is guaranteed that his name would show up with articles showcasing his elite ice hockey status.

Alec learned to skate at the early age of three, and from there, his passion for hockey took off. With encouragement from his parents and friends, he quickly advanced into a tier-one level—AAA hockey. He’s played club for most of his life and had the amazing opportunity to travel around the country, compete, and make new friends.

“I’ve played globally and met kids from Russia,” Alec explained. “I know almost every hockey player in Detroit and around the country.”

His hockey journey has allowed him to develop fast-growing communication skills and maintain and develop friendships with his teammates.

Alec owes it to his parents for helping him get to where he is now. They have supported him and given him the chance to live independently with one of his friends in Detroit. Because of this, he is able to attend Total Package Hockey, a school committed to improving the skills of players just like Alec.

“I was fifteen when I joined,” Alec started. “Being so young, I had to learn how to do things on my own, but my parents were very supportive.”

His goal to play junior hockey in college has guided him most of his life; he doesn’t have an complete picture for his final destination, but he knows that hockey will follow him wherever he goes.

His dedication to this vigorous sport is an admirable trait that many strive to possess. In the past, he played lacrosse but ultimately decided to quit so he could focus more on playing hockey year-round. He made a clear choice as he knew he wanted to be all-in for hockey, and he didn’t look back. Although it restricted his activity outside of playing the sport, he didn’t mind the limitation.

“I don’t regret what I [did],” Alec said. “I may not have been able to go to school dances and have a normal high school life, but I love that about [doing what I get to do].”

Alec is certain he is on the right path, despite what anyone else may say about his journey. The amount of time Alec has spent practicing his skills shows that there is no backing out now with how far he has come.

And while for many, the start of online classes began with the COVID-19 pandemic back in March of 2020, it started even earlier for Alec. His Total Package Hockey schooling program was partnered with Brighton High School, so he chose to attend online school to simplify his schooling experience.

“They’re just like normal classes where you get all your credits done,” Alec said. “It’s nice because your grades aren’t seen as online school grades.”

Alec’s drive to do anything necessary to help his performance has been the root of his motivation. His determination is what keeps him going, and his achievements encourage that determination.

Although he was on the fence and slightly terrified to try out for the Little Caesar’s hockey team when he was younger, his parents forced him to move past that mental block and continue the push for self-improvement. To this day, Alec pushes himself to perform at his best, even through the toughest times.

With the possibility of reaching the pinnacle of USA hockey success for someone his age—a spot in the junior leagues—within his reach, Alec has dedicated more of his time than ever to prove he’s worth it to take a spot.

Alec is ready to move on to the next level and pursue his childhood dreams, developed by countless hours at the ice rink learning and mastering new skills.

“My dedication to playing hockey has given me the opportunity for so many things I wouldn’t have thought possible,” Alec said. “I’ve grown [not only] as a player but as a person as well.”