The Central Trend • May 10, 2021 • https://thecentraltrend.com/101528/showcase/israell-king-has-stayed-optimistic-throughout-the-uncertainties-regarding-this-years-musical/ 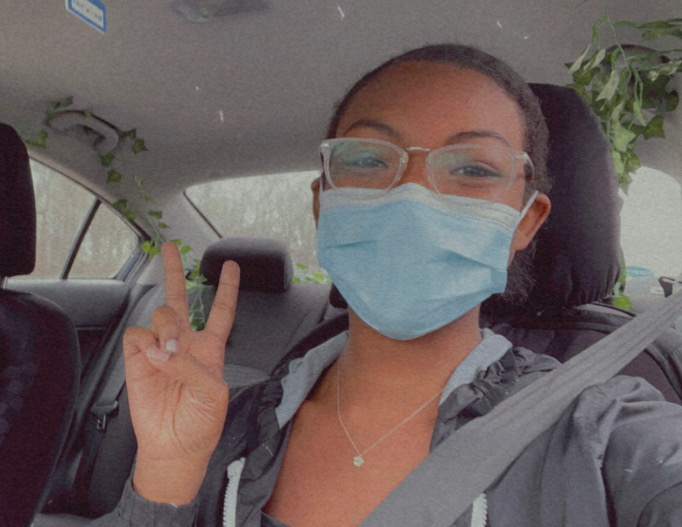 Israell holds up a peace sign for a casual car selfie.

This school year, junior Israell King was a proud cast member of the musical, High School Musical Jr. Even though this year’s musical took the form of a movie rather than a live, on-stage performance, Israell still loved the experience in every aspect.

In High School Musical Jr., Israell played the role of Kelsi Neilsen. In the original film, Kelsi wrote the songs that were performed in the school musical, as well as assigned roles, wrote, and directed the musical, a take on the famous play written by William Shakespeare, Romeo and Juliet.

Besides the fact that Kelsi is a fictional character, the two share some similarities. Kelsi, considered to be one of the minor characters in the film, was shy and had a strong passion for music. As for Israell, she also has a taste for music and considers herself to be on the shyer side of the spectrum.

“Something I learned from Kelsi [was to have] a lot of confidence,” Israell said. “She started off really shy and got pushed around a lot, but towards the end, she definitely stood up for herself and commanded her respective art.”

This is Israell’s third year involved in the musical, her second year being a part of the cast, and her first year being able to fully act and portray her character to the fullest extent.

Because of the unexpected shortening of the 2019-20 school year, Israell was not able to be on stage and have her talent be seen in The Hunchback of Notre Dame, although she participated in the fall play, The Crucible.

In her freshman year of high school, though, she was a part of the crew for Joseph and the Amazing Technicolor Dreamcoat. Even though the crew’s talent is, in some ways, very noticeable to the crowd, there is much more behind-the-scenes works they do, which is exactly what Israell was involved with.

While being a part of the crew, Israell and her friend were what English teacher and Theatre Director Robbin DeMeester referred to as a “child wrangler.” Despite the off-putting name, their job was to make sure the children involved in Joseph and the Amazing Technicolor Dreamcoat stayed content and their needs were taken care of.

With High School Musical Jr. being Israell’s first official time under the spotlight in a musical, there were some challenges she faced that followed her throughout the role of Kelsi.

“The hardest part was definitely learning so much in such a short amount of time,” Israell said. “[For] learning lines, we didn’t have too many because it’s a pretty short musical, but we just went from learning the music and the dances, almost immediately, [then] going into filming. So, it was a lot of work in a very short period of time, and we were confused a lot because it was all new for everybody. That was definitely a bit stressful.”

Israell faced other challenges besides learning her lines. Finding ways to and from rehearsals and practices was hard since she doesn’t have her driver’s license.

There was also a fear of getting quarantined midway through filming. To help combat some of that lingering fear, there were new guidelines reinforced by the school—for instance, having the cast and crew moved further away from students to reinsure safety and prevent contact tracing.

Israell also kept her mask up for the majority of lunch, only lowering it as needed. This was to further ensure that she would not be missing out on any experiences.

Despite the musical looking different compared to past years she was involved, Israell still enjoyed every minute of it.

“I loved it when we were filming,” said Israell, “but also all the times that [we] weren’t, and when we were just all together, as a group, just making jokes and stuff like that on break time, at lunch, and at the after party—those were all pretty cool. My favorite memory by far was when me, Gavin [O’Meara], who played Troy, and [Megan Fox], who played Gabriella were all filming a scene where they were singing together or something; I was at the piano, and it was just kind of funny because we had to have breaks. Filming that one particular scene was funny because we just kept laughing about things.”

Overall, Israell was very pleased with the end result of High School Musical Jr. and was excited that she finally had the chance to be seen by an audience after years of waiting.

“I knew it was going to be good, but I was definitely surprised at how good it was,” Israell said. “I was blown away at it, and it looked like it was crystal clear—the shots were good. It made sense, and it flowed. Everyone looked amazing, too. I just thought that it was absolutely fantastic, and it was cool to see myself; I mean, it was cool to see all of us, and it was just so good. I loved it.”