The Central Trend • May 10, 2021 • https://thecentraltrend.com/101553/showcase/haley-wards-high-school-experience-follows-that-of-her-two-siblings/ 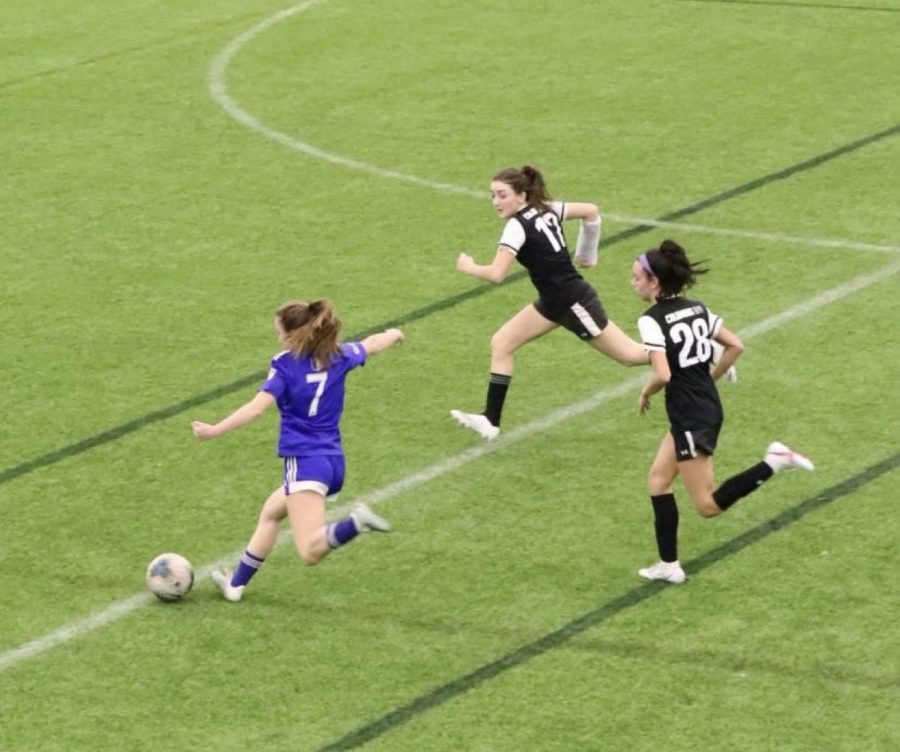 Freshman Haley Ward, or the “little Ward,” entered her inaugural year of high school unobtrusively and in the middle of a pandemic. She kept a low profile, even thought she knew many upperclassmen, as she is the youngest of three kids to pass through FHC.

Her sister Ashley graduated in 2019; her brother Collin graduates this year. So, while she entered high school with a lot of knowledge and connections, her freshman year was, in most ways, an experience nothing like her siblings’.

But, like her older sister Ashley, Haley is an accomplished soccer player.

“At first, my mom signed me up for soccer so I could play a sport,” Haley explained. “She chose soccer since both of my siblings played at the time. Since then, I have continued to play because I love the game.”

Haley has experienced the upsides and the downsides of playing soccer at a club level. As far as the joys of soccer go, she has made some great friendships with kids from other schools through the sport. She has also always enjoyed a tournament called Soccer in the Sand.

“You play [the Soccer in the Sand tournament] on Grand Haven beach,” Haley said, “so it is not super serious, but still competitive and fun.”

With all the excitement and pleasure soccer has brought her, she has unfortunately witnessed firsthand the sacrifices that need to be made in order to fully commit herself to her sport.

“My [soccer] schedule is not awful,” Haley said, “but with the league we are in, we tend to travel to pretty far places frequently. It makes it hard because I sometimes miss out on spending time with friends and family. Just this past weekend, I was in Wisconsin and had to miss spending Mother’s Day with my family.”

For Haley, soccer is a year-round commitment including varying takes on the sport.

“I have played futsal in the winter these past few years, which is another type of soccer,” Haley said. “It is played indoors on a small court for a shorter amount of time, and it is five vs five players. In futsal, we went to Regionals, did well there, and qualified for Nationals.”

But Haley also knows the feeling of loss in the sport she’s so invested in; her least favorite memories are the defeats. It’s the saddest when her team plays well and still can’t match up to the opposition; “everyone gets moody” in these situations, never appreciating the bitter taste of disappointment.

But the lows are surpassed by the highs. Having traversed through so much together, Haley has made cherishable soccer memories with her team.

“We have traveled to Florida twice now for soccer,” Haley said. “It was really fun spending time with my best friends from the team there. All of our families shared a house. We also got to play at IMG Academy, which was cool to see.”

Haley loves soccer enough to consider it part of her collegiate future. Wherever she ends up, she hopes it involves soccer at some level.

“[My goal] is just to possibly try to continue playing soccer at a good college,” Haley said. “If anything, I would hope to at least play club soccer at a big school.”

While following in the footsteps of her older sister when it comes to soccer, her academic high school career has also had some foreshadowing.

“Teachers who have had Collin and Ashley have always connected us and ask if we are related,” Haley said. “They tend to have the same response and sarcastically say they were ‘trouble.’ They also then say how they enjoyed having them in their class.”

Despite the unusual circumstances of this year, Haley has still encountered some of the usual experiences of being a younger sibling at FHC.

“This past year, Collin would pop in my math class and say hi to me, which was just funny to see him,” Haley said. “Some of his friends would also see me in the halls and sometimes say hi, however one of them yelled my name down the hallway, which was both funny and embarrassing to hear.”

Now, with the abrupt end to the seniors’ year, Haley is the only Ward to currently walk our halls, and she is reminiscent.

“[My siblings both being gone] is crazy to me,” Haley said. “I remember the day we dropped Ashley off to her first day of high school. I felt so weird that she was getting so old. It is especially going to be weird having just me at home without either of them.”

For the next three years, Haley will live with words of wisdom from her siblings resonating in her head.

“[My siblings] always tell me to enjoy [high school] as time flies by,” Haley said. “They told me to enjoy and attend all of the fun things the school has to offer.”