Once, she was seven 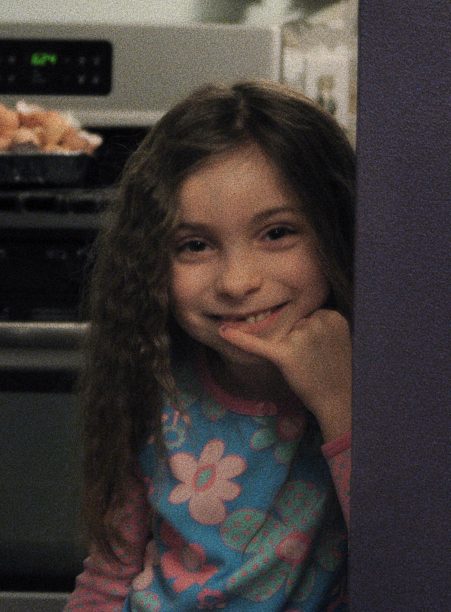 Here I am, on my seventh birthday, in the kitchen of my childhood home

Once, she was seven, and she doesn’t remember much about being seven—mostly the feelings. She remembers how all-consuming those feelings were, the enormous anxiety too great to fit into her small body, the significance with which everything mattered, the intrinsic longing to be more and have more.

Now, she’s seventeen, and she feels like she’s carrying the future in her still child-sized hands; the anxiety has grown with her, still too big for her, so much bigger than it needs to be, but irrevocably fused to her being. Every little thing still matters just as much, and she still longs to be what she is not.

Once, she was seven, and she flitted from couch to chair, from room to room, reading aloud from a book in her hand, but they were her words, not the words on the page. She sat in front of the dated desktop computer, a diminutive figure in comparison, and chicken-pecked the keys to tell her stories, overthinking every string of words. Those stories reside in the archives of flash drives stuffed away in a drawer.

Now, she’s seventeen, a can of Major Melon Mountain Dew at her side on a familiar late night, and her fingers dance across the keyboard with ease. The stories she tells are hers in a different way, entirely too personal, but people will read them and never know. She’s found her voice and a place because of these words, but she overthinks them all the same.

Once, she was seven, and the word bossy rang in her ears. She never lacked a plan, and she never failed to be heard, even with her small stature and squeaky voice. She was no stranger to “bossy,” “feisty,” “mature,” “convincing.” She bulldozed, and sometimes bulldozers cause damage. So she was also no stranger to being told to stop, yet she never could take no for an answer.

Now, she’s seventeen, and that fatal flaw and greatest strength has taken her here, to The Central Trend, to leadership, to people who look up to her. But she still takes it too far, doesn’t know when to stop. She’s well-versed in accidental manipulation because she learned how to get what she wants, and sometimes that’s all that really matters.

Once, she was seven, and she often worried too much about right and wrong. More often than not, she was right, and everything else was wrong. There was much more distinction and clarity then, and she felt the pressure to be both judge and defender. She was the arbiter of justice, and she couldn’t stand to see the lines blurred or the world thrown out of alignment.

Now, she’s seventeen, and nothing’s clear anymore; the glass is speckled, smudged, and blurry, but she can’t stop searching for the answer. Her morals are confused, contradictory, spontaneous, but she abides by them with vigor and scrutiny, even in the face of her own blatant hypocrisy.

Once, she was seven, and when she was angry, she cried and screamed, kicked and punched, lost herself in the inferno. She couldn’t trust herself, not to break and do something she’d later regret, but she was small and powerless, so she couldn’t wreck anything of significance. She screamed into pillows and threw stuffed animals, and with time, her rage subsided.

Now, she’s seventeen, and when she’s angry, she’s still compelled to cry and break things. But now she can break things that matter, so she doesn’t go as far, just allows herself to be torn apart from the inside, turns her hatred inward. Yet she’s perhaps even more reckless in anger, now that she’s older. She hurls words like weapons and hopes they don’t stick; but she’s not naïve enough to believe they never do.

Once, she was seven, and she loved as intensely as she hated. She only knew love platonically, but dreamed of more, and in her love was desperate envy. She hadn’t learned to love herself yet, so she couldn’t love so freely, just passionately and achingly. She could only love conditionally, love what they had and want what they had.

Now, she’s seventeen, and she still hasn’t learned self-love, but perhaps she’s coming to understand self-acceptance. She wonders if she’s behind in love, still only knows it platonically. But she’s okay with love the way it is now, more often than not free of envy, still as passionate as hatred, sometimes blurred, but uniquely hers. She can’t express it, fails to give gifts or come up with words in time. She hopes “I love you” is enough, even if she says it too often.

Once, she was seven, and the rules were abounding, a tidy set of barriers. She didn’t mind them though, and at the very least, she respected them adamantly, feared what laid outside of those careful boundaries; that’s not to say she often wondered, but she didn’t crave the saccharine flavor of rebellion.

Now, she’s seventeen, and she feels caged in by those boundaries. She pushes the limits far too often, and she’s tempted by the sweet poison of complete defiance. She’s coming too close to a time when all those tidy barriers fall away, and she lives in exhilarating fear of who she’ll become without them.

Once, she was seven, and of all the things she wanted so fervently, to grow up was the strongest desire of all.

Now, she’s seventeen, and adulthood is a mere nine months out of her grasp, and not enough has changed. The girl of seven years old wasn’t ready to face the future, and neither is she. Both of them are still learning how to live, but one of them should have figured that out long ago. One of them will be lost when she shouldn’t even need a map.

Once she was seven, and she had time. Now, she’s seventeen, and time’s running out.