The Central Trend • May 10, 2021 • https://thecentraltrend.com/101582/opinion/the-fhc-film-festival-was-filled-to-the-brim-with-entertainment-and-creativity/ 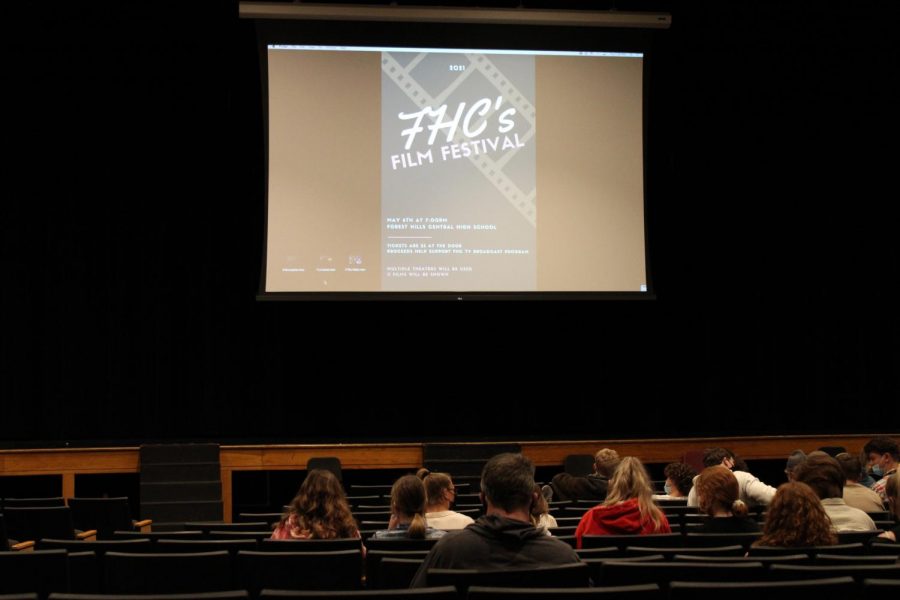 The FHC Film Festival was extremely entertaining, and I will definitely be going again next year.

I am not much of a movie-watcher.

The average movie length is about two hours; I simply cannot sit still for that long.

But after watching many of the enticing trailers for this year’s FHC Film Festival on FX, I knew it was something that I could not miss out on.

With eleven films that range from ten to fifteen minutes, I was concerned over the fact that I was going to be sitting for a longer time than I could handle, which my jumpy legs would not appreciate. But with the way that the Film Festival was set up, I was able to walk all around the high school in between movies.

I was accompanied by my friend, freshman Madi Evans, to the FHC Film Festival, and after spending some time formulating our game plan, we decided that we were going to watch the films Dog or Dawg, Who Did It?, The Clinic, Breakthrough, Le Casse, and Delilah. I am not really sure what I was expecting of these films when the Film Festival began, but I was extremely satisfied with the amount of entertainment each one of these films supplied. For me, the films that stood out the most were Delilah, The Clinic, and Dog or Dawg.

Dog or Dawg is an action/adventure short film, starring senior Sam Tuori and senior Dawsen Beach, featuring the dog, Cosmo Gonzalez. In this film, Sam and Dawsen are best friends who are joined by the hip. Everything changes, however, when Sam gets a dog for his birthday. As jealousy blankets over Dawsen and a suspicious Sam loses his dog, their friendship is put in jeopardy. I was really invested in this film, and was excited when I figured out how Cosmo disappeared. With the action and comedic relief that Dog or Dawg provides, this was a great film to enjoy and was an amazing way to start my night at the Film Festival.

Delilah is a comedy portrayed by junior Jack McNamara, senior Jonah Spates, senior Alec Gast, and senior Isaac Gurley. The film is about a group of friends going about their day with one small hiccup: their friend Doug won’t wake up. As the day goes on, the group attempts to complete their errands while figuring out a way to wake up Doug before his date with a girl named Delilah. Delilah was extremely entertaining and didn’t have a dull moment. There were many comedic moments throughout the film that had me laughing, along with the sterling camera and audio quality. With all of that in mind, Delilah had the perfect equation for an amazing film.

The Clinic is also a comedy, starring senior Luke Matelic, senior Gabe Moraru, senior Collin Ward, senior Brady Nolan, and senior Matthew Mahoney. In this short film, three musicians made it big in the music industry. But as the idea of fame gets into the lead singer’s head, he begins to make bad decisions that put the band and their friendship on the line. The Clinic was also another phenomenal film that kept me entertained for the whole fourteen minutes. The props that the cast used were clever, from wigs that made them look like they were in a 1980s rock band to the various instruments that the band used. Along with how much fun it was to watch, The Clinic also had amazing music that was stuck in my head for the rest of the night.

For my first time going to the FHC Film Festival, I can say that it was a fantastic experience. The fact that I got to stand up and walk to the location of the next film was a nice added feature, especially for someone like me who cannot sit still. Every single film I watched was entertaining, exciting, and creative. There is no doubt that I will be attending the FHC Film Festival again next year.