Joe Freihofer previews this Saturday's matchup between the Ohio State Buckeyes and the Michigan State Spartans. 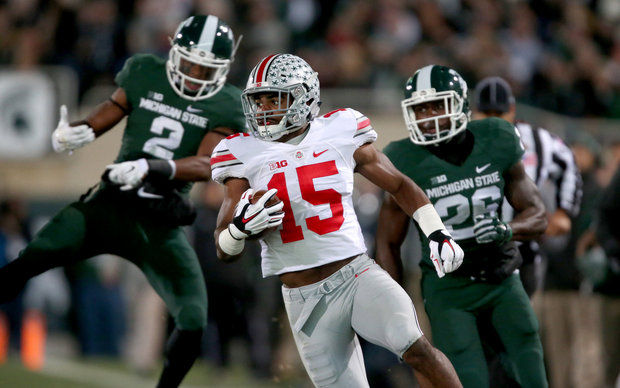 On paper, the Ohio State Buckeyes are a 22.5 point favorite against the Michigan State Spartans in this Saturday’s Big Ten showdown in East Lansing. The Spartans have struggled against almost every single team that they have faced so far this season, a sharp contrast from last year’s season. Mark Dantonio led his team all the way to the playoff only to be terminated by the legendary coach Nick Saban and his unstoppable crew of NFL caliber talent. Michigan State now finds itself in an unfamiliar position under their beloved head coach. However, if there’s one man out there who knows how to defeat Urban Meyer, it’s Mark Dantonio.

The Buckeyes are rolling into East Lansing with a 9-1 record and arguably one of the toughest schedules in all of college football. They walked away unscathed after a heavyweight match up against a talented Oklahoma team led by former Heisman candidate Baker Mayfield. OSU also traveled to Happy Valley to take on the Nittany Lions in a blood bath. That game, however, turned out to be a complete disaster for the Buckeyes and ended up becoming their first loss of this season. As for the Spartans, almost every team that they have faced has presented them with all sorts of challenges. From BYU, to even Maryland, the Spartans just cannot seem to find what works for them. Yet, they started to gain ground during the Michigan game late in the fourth quarter and picked up a victory against Notre Dame that, at the time, was regarded as a respectable win. Urban Meyer has asked about the Spartans’ ability to cause problems for dominant teams and recognized that they can be dangerous at times.

“We’re not the only ones they’ve given problems to,” said Meyer during his weekly press conference. Meyer also noted that his team is pouring all of their focus on the Spartans and trying to get the job done on the road. “All focus and laser lights are on a team that we know very well. We have a lot of respect for their excellent players and great coaches. We’re going to do our very best to perform well on the road.”

Luckily for Michigan State, they came away with their biggest win of the season against the Rutgers Scarlet Knights defeating them 49-0. The Spartans finally have a touch of momentum heading into this game after being on a losing spiral.

The kickoff for Saturday’s game was recently shifted to a noon kickoff time which will take away a lot of energy from Spartan stadium. For Meyer, his Buckeyes have become quite familiar with the East Lansing venue. They knocked off MSU only two years ago which boosted them into a late playoff push that ended in a National Championship title. However, the very next year, the Spartans stormed into Columbus, Ohio and did the unthinkable. They defeated  Meyer and the Bucks with a late field goal from Michael Geiger that sparked the infamous windmill celebration. For Meyer, Dantonio has often been his kryptonite in the biggest games. The series is at 2-2 currently in Meyer’s time with the Buckeyes, and the recent competition between the two sides has developed some form of a rivalry. Will this year be another Spartan upset?

I believe that Meyer will have his star studded side ready to go come Saturday morning. Coach Dantonio is going to try and fire up his side with it being Senior Day and arguably their biggest game of the season. Dantonio has always done well with finding a way to crack the offensive rhythm of the Buckeyes, and this year will be no different. His side has nothing to lose and everything to gain; Meyer and the Buckeyes are making a late poll surge after Michigan’s loss to Iowa, and a defeat at Spartan Stadium on Saturday would be catastrophic to their playoff chances. However, the Spartan’s efforts will not be enough to hault the Buckeyes, assuming that they get things rolling on offense early. Quarterback J.T. Barrett has struggled this season with connecting with his receivers.  A young and unpolished offensive line also proved to be fatal for the Bucks against a hungry Penn State side a few weeks ago. Despite this, if Ohio State can get the ball to their playmaker, junior Curtis Samuel, they will be in good shape. This game should be a great watch and one that the Buckeyes should win handily. My score prediction for this game is a Buckeye victory: 34-17.