The Central Trend • May 17, 2021 • https://thecentraltrend.com/102064/showcase/lynlee-derrick-is-driving-down-the-road-of-her-own-future-one-where-she-is-excited-to-wake-up-every-day/ 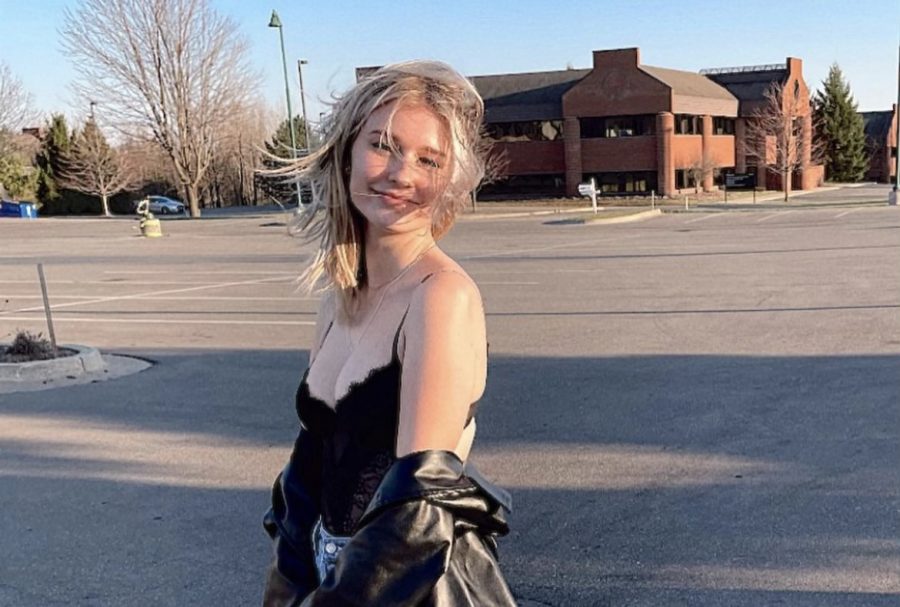 Lynlee Derrick has been writing for The Central Trend since her freshman year and has been Editor in Chief for the past year. She graduated tonight, May 17th.

Senior Lynlee Derrick drives like she lives: without hesitation.

In all the ways that it manifests itself, whether it be impromptu ice cream trips with her best friend or hours spent hot-gluing Diet Pepsi cans into a table, she is driven by an impulsive nature that never fails to empower her to do exactly what she wants.

“I feel like hesitation kills,” Lynlee said. “That’s actually what I was raised [to believe]. I was taught that if you hesitate while driving, you will be murdered by a vehicle. Everything I do is just without a lot of hesitation. I’m a very anxious person, so big decisions stress me out, but . . . I want to do things, and I want to do them now because nothing is guaranteed in life.”

This very mentality propelled Lynlee off the path she’d been following for all four years of high school and onto a more fitting path.

Growing up in a family that focused heavily on academic success, Lynlee never really thought twice about pursuing STEM. She prioritized math and science classes in her schedule and counted on following in the steady and predictable footsteps of her family members.

It wasn’t until the fall of her senior year that Lynlee realized STEM was the wrong choice for her future. The math and science classes she had loaded up on became overwhelming, and she couldn’t find the passion she knew she would need to devote her life to studying STEM.

“[STEM] almost felt like the path that people had decided for me,” Lynlee said, “and [those jobs] make good money, you’re helping people, and it’s a stable job. [But] I think I just realized that I’d rather toss stability and ‘the path’ away in order to have my path, even if that means less stability but more happiness and learning.”

And foregoing her future in a STEM career was certainly a risk; Lynlee had already applied to half of her prospective colleges as a STEM major, and college wasn’t far away on the horizon. There wasn’t much time to choose a college that would satisfy her craving for adrenaline, adventure, and constant learning.

So Lynlee turned to what she had only ever considered as “an odd obsession with geopolitical affairs.” Conversations with her aunt, who works for the Department of Defense, and late nights watching international news channels had fostered within her a passion for international politics.

Ultimately, it came down to the fact that Lynlee loves to learn, but STEM wasn’t the kind of learning that made her happy. Geopolitical affairs seemed like the answer.

“It’s a field that I can keep learning in because geopolitical affairs are always evolving and changing,” Lynlee said, “and you can watch Turkey become a regional power but then see Russia stomped out and a pipeline [built] to Germany. The craziest [stuff] goes on.”

The program is incredibly selective, accepting only 25 first-year International Studies majors each year and allowing for a three-year undergraduate degree. Lynlee will “live like a family” with the other students in the program, participating in monthly dinners and seminars on international cultures.

Already, Lynlee has formed strong bonds with the other students entering the program. They affectionately call each other “the glo bros,” and they interact both in a group chat and on occasional Zoom calls.

For Lynlee, the people she met were a substantial part of the reason she was drawn to the Global Scholars program. Because she’d invested so heavily in STEM classes and activities, she never had the opportunity to participate in AP Government or Model UN and interact with other students who cared about the same things she did.

Hearing her peers passionately discuss politics and international relations was a first, and Lynlee was blown away by their maturity and intelligence.

“The people I’ve already met in the school, and the way they carry themselves, and the way people are constantly fighting for human rights—it’s just astounding,” Lynlee said. “I learn something new from interacting with all these people. And it’s not an echo chamber, which is the best part, because these people are still pushing my thoughts and pushing the way I feel about myself and other things.”

Lynlee knows that the new path she’s on will make her happy, but it doesn’t mean she’s not nervous about the risks she’s taking. Her college experience will leave her “looking down hundreds of thousands of dollars in debt,” so she can only hope that the experience will help her find a job that she loves and that allows her to continue to do the other things she loves most in life, like traveling and exploring the world.

But that fear won’t hold her back—not when she refuses to hesitate and not when she knows that she is on the right track to achieve what is most important to her: being excited each day because she is continually learning and continuing to force herself and others to make changes for the better.

“I want to be a household name,” Lynlee said, “but I also know that oftentimes, you can still get things done without having the same publicity. There are so many cogs in the machine to keep the world running and to keep us safe, and I think that no matter where I am or no matter how recognizable I am, at least if I’m content with what I’m doing, I’ll always be okay with it.”