The Central Trend • May 25, 2021 • https://thecentraltrend.com/102367/showcase/gigi-sinicrope-shoots-and-scores-making-the-varsity-soccer-team-as-the-only-freshman/

Gigi Sinicrope shoots and scores, making the varsity soccer team as the only freshman 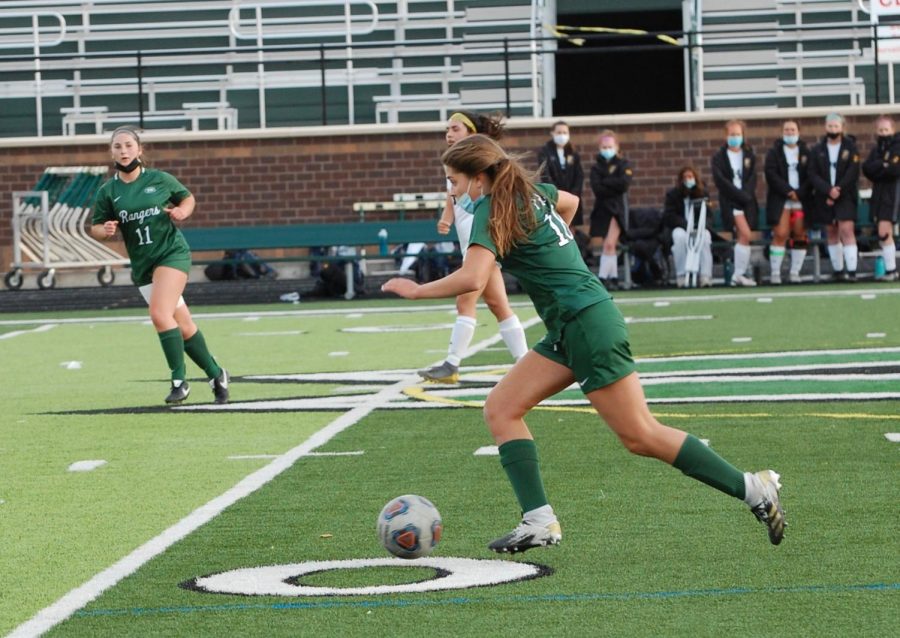 Freshman Gigi Sinicrope kicking the ball down the varsity field in hopes of another point for the Rangers.

Freshman Gigi Sinicrope has scored an uncountable amount of soccer goals within her five years of competitive play, but no ball hurled into the net—despite how agile or vigorous—could beat this new and impressive accomplishment of hers.

Gigi has made the Girls Varsity Soccer Team—as the only freshman.

However, in spite of this lifelong achievement, Gigi didn’t initially see herself playing soccer on the varsity field. But to her utter surprise, she was proved wrong by not just her new coach, but herself as well.

“I really didn’t expect to make it,” Gigi said. “All the girls who play are super competitive; there’s a lot of upperclassmen this year. I didn’t really go in with expectations to make varsity.”

Despite Gigi’s after-the-fact excitement, the actual process was quite the opposite feeling of these post-tryout emotions she had.

“[Our coach] called us each over one by one, and I was super nervous because I was one of the last people to go,” Gigi said. “I was really excited, but I was also really nervous to play with the older girls because everyone was really good, and I didn’t want to make a mistake and be the reason we have a bad season.”

Pushing her nerves to the side, Gigi was ecstatic when finding out she was not only on the varsity team, but the only freshman who made it thus far.

All of her strenuous work put into her favorite sport has paid off, making her passion for soccer grow even deeper. Gigi loves to see rewarding results after working hard, and that’s one of the many reasons she adores soccer.

“I’m really competitive,” Gigi said. “I just like to have something where I can compete and try to be the best I can be. It just helps me stay active, meet new people, and try new things so it’s fun.”

But of course, as it has everything, COVID-19 altered the girls’ season a bit regarding the bonding experiences the team would have had during a regular year.

“Because of restrictions, we haven’t really been able to do everything we usually would’ve done, which kind of stinks,” Gigi said. “We usually would have gone to Camp Henry and had bus rides, but even without doing all that, we have to practice and play so many games during the season that we spent a lot of time together even though we haven’t been able to do the stuff we would’ve normally done.”

You would think that this lack of bonding exercises would trouble the only freshman on a team with juniors and seniors; however, Gigi was welcomed to the team swiftly, considering how compassionate this team is towards one another.

“Everyone is super nice to me,” Gigi said. “I’m so happy this is the team of girls I got to come onto as a younger player because everyone is so nice and friendly and helpful. They all have played a lot longer than me, so it’s nice to have people to learn from.”

Because of this, Gigi idolizes each and every member of the team, yet some players have stood out that much more to Gigi for their great combinations of friendliness and skill level.

“I really look up to [seniors] Lilly VanSkiver, Autumn Burns, Zoe Lipke, and all the other seniors and upperclassmen who’ve helped me be on the team,” Gigi said. “Not only because they’re really good players, but because they’ve been super nice to me and [have] helped me be a better player and just fit into the team.”

These few players, that Gigi has heart eyes for, contribute to all the enjoyment she’s had during her first season as a Ranger soccer player. More specifically, Gigi feels the closest binding she has to a player who’s in the grade above her—especially because they’re the only sophomore and freshman on varsity.

“[I’ve had fun] riding with all the girls to games because I can’t drive,” Gigi said. “Spending time and getting to know a lot of the older girls like [sophomore] Dailey [Tucker]—because she’s the closest in age with me—has been super fun, and I’ll remember that all four years I play.”

With all of the treasurable friendships she has made, no matter what age or grade, Gigi has created an environment of alacrity both on and off the field.

But to Gigi, playing for FHC is the real incentive to this whole experience.

“School soccer is a lot of fun because I get to play with people I go to school with, who usually I wouldn’t be very close with,” Gigi said. “People come to the games, and you’re playing for the school, not just yourself and your team.”

School soccer compared to club shares similarities but hosts even more differences. Club has to do with more traveling whereas a school sport surrounds working towards a victory for the school’s unity. And to Gigi, school soccer has paved a sacred place in her freshman heart, and that shall stay for three years to come.

“As long as I continue to make the team, I plan on playing Ranger soccer until I’m a senior,” Gigi said. “I like to be at games with people that go to my school, and when people come [to support], it’s just a different experience.”

Ranger Girl’s Soccer has molded Gigi’s first year as a high schooler to be a memorable one. The lessons she has learned from not only the team atmosphere but her fellow teammates, themselves, are unforgettable.

Thanks to Gigi’s dream of making varsity, her persona of herself as a soccer player has changed—but in the best way possible.

“I think it has kind of taught me to play for more than just myself,” Gigi said, “[but] to play for the school and all the older girls. And especially because I’m younger, I don’t want to be the reason we don’t do well. I’ve learned to always be nice to everyone because you never know who you might end up on the field with.”