The Central Trend • May 24, 2021 • https://thecentraltrend.com/102385/showcase/with-the-advice-of-her-siblings-dailey-tucker-takes-on-high-school-and-year-round-soccer/

With the advice of her siblings, Dailey Tucker takes on high school and year-round soccer 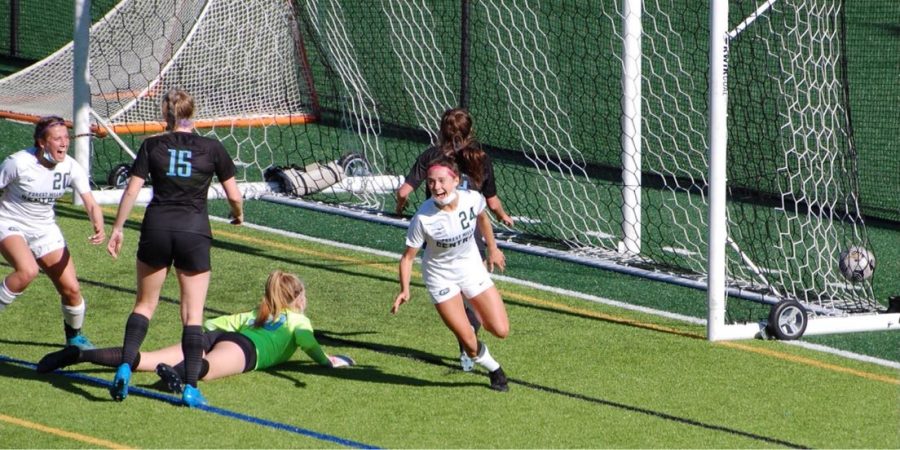 This team sport has become a huge commitment in this young athlete’s life. As a right forward, Dailey plays for both club and high school teams. In the fall, Dailey is on a club team for Revolution, and she plays for FHC in the spring.

Like many, Dailey began practicing soccer as a young child, following in the footsteps of an older sibling.

“I started playing soccer when I was five years old for American Youth Soccer Organization,” Dailey said. “I was on a team with my older sister, and we had so much fun playing together.”

At one point, she took some time off to confirm the sport was for her.

“I was forced into playing soccer because my mom thought that if I tried it, I would love it,” Dailey said, “but I quit after a couple of years and started gymnastics until I realized that soccer was my sport, and then I started playing again.”

Now, she’s fully dedicated to the sport, and training takes up a consuming amount of her time throughout the year.

“During the high school season, I play soccer almost every day,” Dailey said. “I practice every weekday and on days I don’t have practice, I have a game along with some weekend games. During club season, I practice twice a week with games or tournaments on the weekends.”

While time management can be a deal-breaker for many athletes, Dailey doesn’t mind the sacrifices she’s had to make; the memories she’s made both on and off the field make it all worthwhile.

“Since I started playing for AYSO, I have made so many friends along the way,” Dailey said. “I’ve met so many great people from different schools, and I’ve even grown relationships from the high school season. I love playing soccer with my friends because we are able to have so much fun on and off the field as we make new memories.”

Making the varsity soccer team as a sophomore is a great accomplishment, and Dailey’s favorite sports-related memory to date comes from being on that team.

“My best soccer experience was scoring the first goal in my first high school varsity game,” Dailey said. “After I scored, I was filled with joy as my whole team surrounded me and cheered me on.”

As far as future soccer aspirations, Dailey is taking it one day at a time.

“I plan on continuing through the rest of high school and see where things take me,” Dailey said. “As of right now, I don’t plan on playing in college. But if the opportunity comes around, my dream school would be the University of Notre Dame.”

“I love being a younger sibling to someone at FHC because [senior] Delaney [Tucker] helped set a good example and is someone I can look up to,” Dailey said. “Having my sibling at school with me definitely made it easier because she was always there to help me and give me advice along the way.”

Like many with siblings to graduate this year, Dailey is sad to see her sister go on to new things and leave the high school building.

“I really enjoyed spending two years of high school with my sister by my side,” Dailey said, “and I am so sad to be the only Tucker at the high school.”

Her siblings’ words of wisdom have made an indelible mark on Dailey, and she lives her life and takes on her sport with them in mind.

“My older siblings have always told me to put in the most effort as possible so you don’t look back and regret the decisions you made,” Dailey said. “I’ve been told to participate in everything I can and make my four years the most memorable and fun experience.”