The Central Trend • May 24, 2021 • https://thecentraltrend.com/102416/showcase/junior-katherine-hartman-finds-satisfaction-in-working-hard-towards-her-goals-and-the-future/ 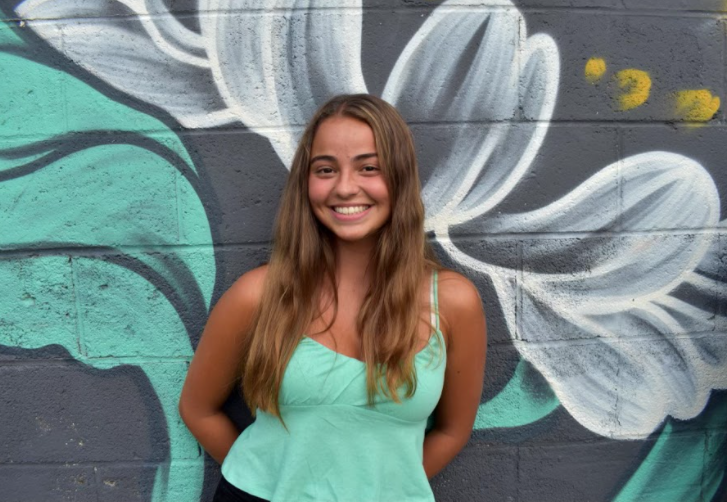 Katherine smiles brightly in front of a beautiful painting on a building wall.

Junior Katherine Hartman would describe her friends as the outdoorsy type.

They love being under the blue sky and the fresh air; their best memories have been made under the sun or moon.

“I love to hang out with my friends,” Katherine said. “I have a good group of friends who like to go to the beach; we’re the people who like to go outside and go swimming and all that.”

The start of Katherine’s friendship with her current group of friends reflects their yearning for adventure and shows how they enjoy the spontaneity of their adventures.

Although Katherine only became close with her current friends at the beginning of the school year, she’s held a constant friendship through one of them long before she found her group.

“I feel like everyone plays soccer when they’re little, but I met one of my really good friends, [junior] Claudia [Folkert],” Katherine said, “when I was younger, and we’ve always played together.”

Claudia may have been the main reason behind Katherine’s choice to continue playing soccer, but her appreciation for the sport has only grown over the years.

“It’s been something that I’ve always stuck with,” Katherine said. “I’m really proud that I’ve done it every single year. It’s something I look forward to, and it’s a break from school and stress; it’s a good time, I love it.”

Despite Katherine being able to play club soccer her whole life, COVID-19 led to the cancellation of her sophomore year of soccer at school, and she had to take a break from soccer her freshman year due to an injury.

“I strained my hip flexor in a game, and I was out for the second half of the season,” Katherine said. “It took me around three months to get back to normal, so half the summer. It made me more hesitant to play, like ‘I don’t want to get hurt,’ but it makes me want to just go out there and play as much as I can now because I lost that time.”

Katherine’s hesitations have almost completely cleared up, and she has gone back to enjoying soccer as much as she did before, if not even more now.

“I just like being out on the field, it’s a good feeling when you get to go in,” Katherine said. “I’m a captain for my club team, so people look up to me, and there’s good energy; I like bringing that to the field.”

Although Katherine plans on taking a break from soccer in college to branch out to new opportunities, she will forever think back to her favorite memory from soccer.

“When we were younger, we would always go to this tournament in Traverse City with my club team,” Katherine said. “Claudia was on my team, and we would win this tournament every year, and it was just really fun. It would be on my birthday weekend, so everyone would look forward to the Cherry Cup.”

Quitting soccer after playing it for so many years may seem pointless to some, but Katherine has found that her experience with soccer and her injury has led to possible careers for her.

“When I go to college, I want to make prosthetics or do something with physical therapy,” Katherine said. “I want to be able to make things for kids [that are amputees] if they want to play sports.”

While there isn’t anyone in Katherine’s life that’s an amputee, she is confident she’d view it as a passion, not a task.

This seems like a lofty goal, but Katherine already finds enjoyment in learning about the human body, and more specifically, her required anatomy class.

“This is so dorky of me, but I’m in [Human] Anatomy, and I love it,” Katherine said. “I’ll probably pick a major that’s time-consuming because I’m annoying like that, so something in the medical field. As far as interests go, I’ll be spending a lot of time on school so hopefully, I’ll be able to find friends that are good at school with me.”

For now, Katherine finds that shared drivenness with her current friend group, who share a passion for school with her.

“I make fun of myself [for being driven],” Katherine said, “but my group of friends all care about school; we’re tryhards, I’ll say it right now, but I don’t really care, I love working hard and putting in work and getting things I deserve. That’s one thing I’ve learned this year: I don’t really care what other people think, I just want to do my best.”

Although finding this group of friends has been hard for Katherine, she’s proud of the resiliency she’s shown over the years as she searched for people who fit into her life.

“It’s been so hard to find my people,” Katherine said. “Right now, I’m really lucky to have a good group of girls and guys I can talk to, but it took time. As I grow older, I can see who I like talking to. You come in with your freshman clique, but you need to give it time to see how it all plays out.”