For the Love of the Game

After a torn meniscus, junior Amber Cargill's dedication helps her find her way back to tennis. 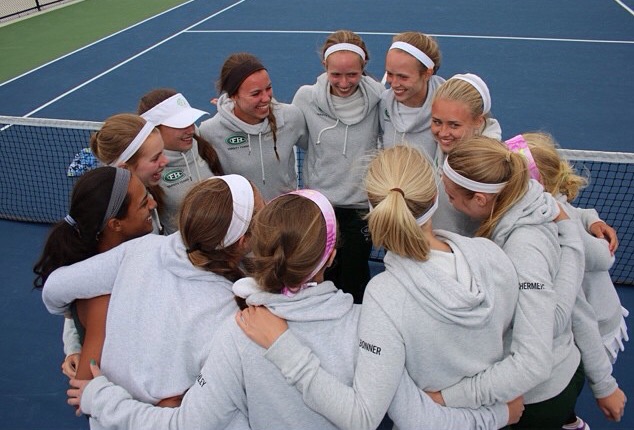 As the snow starts to melt, many high school athletes begin the transition from winter sports to spring sports. For junior Amber Cargill this was not; instead of her usual move from skiing to tennis, Cargill was sidelined with an injury.  Cargill tore her meniscus while skiing in the conference meet.

“I was just going down the hill and one of my skis fell off which is nobodies fault it just kind of happened,” Cargill said. “I toppled for about 20 feet. My first reaction was that I was just really mad that I couldn’t get back up to finish the race. At that point I didn’t know why I couldn’t.”

When her injury happened medical personnel quickly raced to assist her. She was brought away in toboggan sleds. They covered her face and wrapped her up in blankets and took her down the hill.

According to Cargill many people believed it was just some torn muscles and a bruised bone. Cargill tried playing tennis and skiing but she was having a lot of trouble. Because it continued to hurt she went to the physical therapist. He examined her knee and told her that she had definitely torn her meniscus and that she would need an MRI.

“I didn’t believe him at first,” Cargill said. “ But I got the MRI it showed it. I was really shocked and disappointed looking at the results because I didn’t think that would happen to me.”

After they received the results from the MRI Cargill needed to be scheduled for surgery. Cargill expressed that she was extremely lucky in the whole process because they told her they next opening wasn’t going to be until April and it was February; however, another patient made a cancellation and she got in the week after the MRI. Otherwise, she would have missed all of her tennis season.

The doctor’s estimated that the recovery time would be six to eight weeks. From the first day they told her she could play from a stand still position she got 15 out of 15 of my serves in. Because of Cargill’s dedication to the sport she was back within four. Cargill’s coach, Dan Bolhouse, believes Amber’s dedication to the sport allowed her to come back when she did.

“Amber worked very hard to rehabilitate her knee following surgery,” said Bolhouse, the assistant varsity tennis coach. “Injuries are challenging both physically and mentally, and due to the timing of her knee injury I know it was very hard on her.  She was forced to miss tennis tryouts while letting her knee heal fully before participating with her teammates.  I had conversations with her about allowing her knee to recover before going back to practice.  Knowing Amber and her work ethic, I was afraid she would return too soon and injure her knee.  I compliment her for taking the time needed for a full recovery before rejoining the team.”

Sophomore Molly Wiener emphasized Cargill’s ability to be competitive but to also have a good time.

“It was a great experience to play with someone that is that dedicated and competitive but also will keep it fun,” said Wiener, Cargill’s doubles partner for the year. “She wants to win but always has a great attitude and helps cheer on everyone lifting the team spirit.”

Bolhouse agrees with Wiener because she is always willing to out the team first and she wants the team to be as successful despite how she is doing.

“I’ve coached Amber since her freshman year and I’ve witnessed her growing as a player and person over the years,” Bolhouse said. “ I have thoroughly enjoyed coaching her and I look forward to her final season at FHC.  Simply put, Amber is an amazing person both on the court and off it.  Her infectious smile and social skills are what draw people to her and her caring and loyal personality keeps these people close.  I’m very excited for her senior year and I know great things will happen for her.”