You’ve got a friend in me 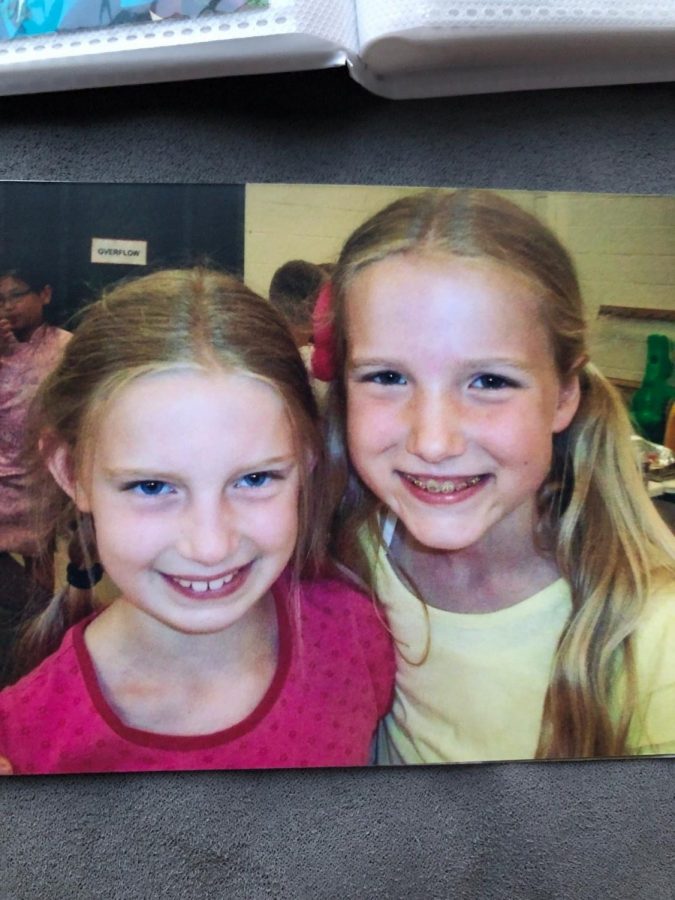 Lauren and Liza with big smiles on the last day of fourth grade before going off to separate schools.

*Lauren is in italics as she wanted to be fancy, and Liza is not because she wants to be taller.

Due to our matching golden locks of hair, we claimed to be sisters. We were attached at the hip, theoretically of course, and kindergarten was no match for us. Starting school for the first time is scary, but the bubbly little girl as animated as a Disney character made coming to class every day something I looked forward to. It’s insane to me to think that you were one of my first ever friends. I never realized that the friends I met in kindergarten would be the ones that would stick with me forever; good thing I found a super sweet one who’s always there for me.

Past the young days of kindergarten, we were separated for the first time. Our first grade class was a test of how the rest of our lives would go. There were no cell phones to easily text each other—only the belief that we would one day see each other again, even if that was just at recess longing to be big enough for the “big kid playground.”

Our elementary school days were some of the best of my life. I became friends with some of the coolest kids in the universe, and two of them, you and Rachel, have lived to tell our tale, even when the two of us left you for a different school.

Even different fifth and sixth grade schools couldn’t keep us apart. While you followed your explorer side and ventured to Goodwillie Environmental School, I completed those two school years at Central Woodlands. Honestly, I think that transition greatly benefitted us—and our whole friend group. We were able to introduce each other to our newfound friends and build the ever-present bond that our friendship has turned out to be.

Despite our distance, we were able to maintain our friendship through phone calls, play dates, and letters. One day over the summer, as I was missing human connection, I thought to pick up a pencil and paper and found myself an envelope and stamp; I wrote you a letter. We became pen pals over the summer and even through part of the school year and continued on until we were reconnected again.

You were my first ever pen pal. I think you sent the first letter, and the tradition just carried on from there. I still have a drawer completely full of all the little notes we sent back and forth all the way from 2014 until last summer when COVID-19 kept us from in-person visits; yes, I’ve kept each and every one of them.

All the letters were filled with various Disney characters, fairies, Pixar characters, and even some “P.S.” statements written to each of our American Girl Dolls, who were best friends just like us. Sometimes I’ll get stuck reading through them for hours with a goofy smile on my face when I attempt to clean my bedroom. I can’t believe how little we were and how much we’ve grown. The letters are evidence of that.

To enclose my letters to you, I made sure to have American Girl-like decorated envelopes. I would add pictures of our favorite fairies and other Disney characters that popped into my mind. I would part with my favorite stickers to attach to your letters.

One of these days, we will not need the letters to tell each other of our adventures.

We will take the trip to Disney World like we’ve always anticipated. We’ll ride all the rides and meet every character with the biggest smiles on our faces. But until then, I have no doubt that we will live out our fantasies by having numerous Disney movie nights at one of our houses.

Yes, we will take our trip to Disney, and we will have more adventures together than ever imaginable. We will take turns housing our fellow kindergarten best friend as she teaches the youth of tomorrow. We will be the best friends that never quit. Disney will want to write a story about us and will employ us as the writers. Rachel, you, and I will be the next Mike, Sulley, and Boo, just as we see ourselves.

What a time we’ve had so far—all the way from Mrs. Katt’s room at Ada Elementary to now as we anticipate walking across a stage in a mere eleven months with a green felt cap on our heads; we have made it through years of not seeing each other, and we will make it through life as best friends until we are old weirdos looking for something to do.