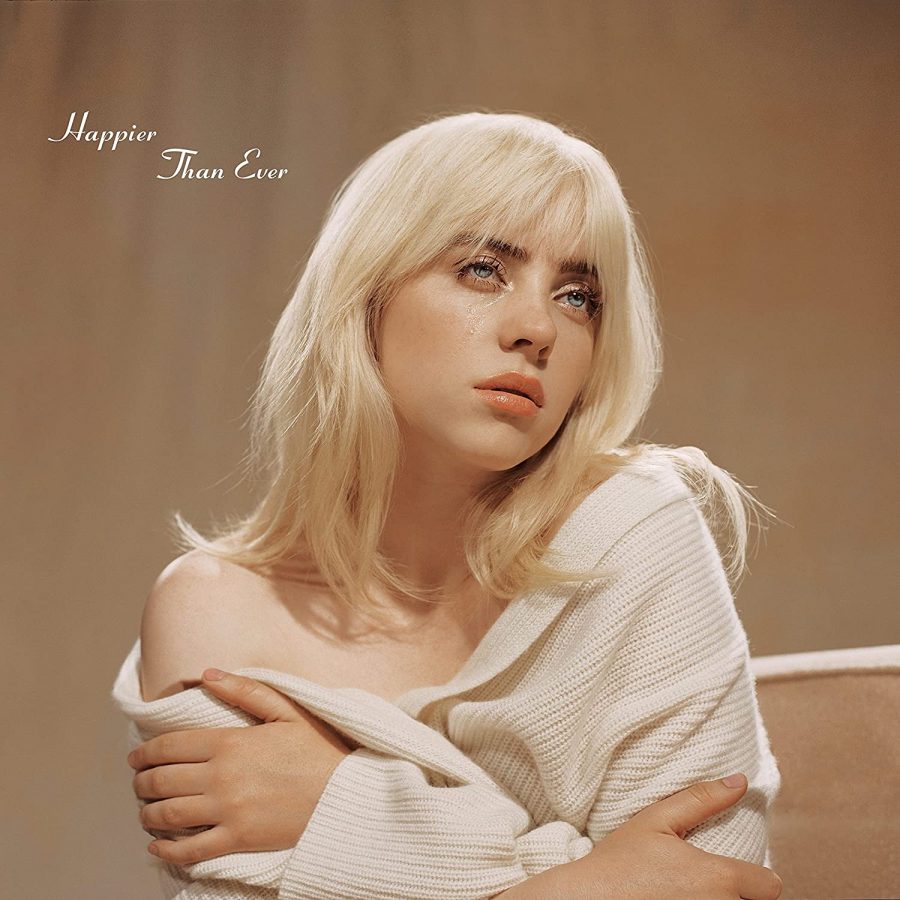 The cover to Billie Eilish's newest album, Happier Than Ever.

The wait is over.

On July 30, 2021, Billie Eilish released her sophomore album, Happier Than Ever, which fans had been impatiently waiting to hear as a follow-up to her amazingly successful first album, WHEN WE ALL FALL ASLEEP, WHERE DO WE GO. Her new album has a tracklist of 16 songs, totaling 56 minutes. While listening to Happier Than Ever, my feelings were mixed and jumbled into an unsightly nightmare. Some of the songs, such as “I Didn’t Change My Number” and “NDA” sound almost identical, with indistinguishable beats, the same tone in her singing, and very similar lyrics. Those songs, in particular, had me bored and uninterested, borderline begging for more.

Though there were some tracks that didn’t strike me as fantastic, there were three songs that I absolutely loved, which is what I am accustomed to when listening to Eilish. With these songs, Eilish took a much different approach as to how she composed her music. Instead of sticking with the melancholy, melodic sound that she’s known for, she and her writing partner and brother, Finneas, branched out with a much more euphoric tone.

To begin, my third favorite song in the album is “Male Fantasy.” The musicality is simple, yet fitting for the song with the soft stroke of an acoustic guitar. What I especially love about this song are the lyrics. In this song, Eilish sings about how she still has feelings for an ex-boyfriend. She sings, “Can’t get over you, no matter what you do, I know I should but I could never hate you.” She continuously attempts to get over him, but each attempt is fruitless. With the combination of her angelic vocals, the melodious guitar, and the story behind the lyrics, “Male Fantasy” is an all-around beautiful song.

My second favorite song on Happier Than Ever is “Your Power.” Eilish released this song as a single on April 29, 2021. Though the instrumental factors of this song are similar to “Male Fantasy,” the lyrics to the song are much different. In “Your Power,” Eilish sings about someone in her life who uses their authority–or “power,” as she sings–to make her feel special and loved, but then uses that power to put her down. Billie sings during the chorus, “Try not to abuse your power.” This line is an attempt to show this person is taking it too far. This song gives off a celestial type of feeling that I would never get tired of.

Finally, my most favorite song on the album is, unironically, “Happier Than Ever.” This song is completely different from her usual lineup of music. The song begins as a soft, bluesy tune, then, around halfway through the song, it escalates to a bolder, rock-like vibe. In “Happier Than Ever,” Eilish sings about a past relationship with rapper Brandon Adams. She never felt like herself in that relationship, which is what she means when she sings, “When I’m away from you, I’m happier than ever.” In the first verse, Eilish sings, “Do you read my interviews? Or do you skip my avenue?” This line depicts how Adams was never truly invested in their relationship. “Happier Than Ever” brings a whole new light to Billie Eilish and all that she is capable of. I would even go as far as to say that this is my favorite song that she has ever written.

Eilish continues to experiment with her music style and succeeds in creating new tunes with powerful lyrics that keep her fans coming back for more. Now, the wait begins for album number three.