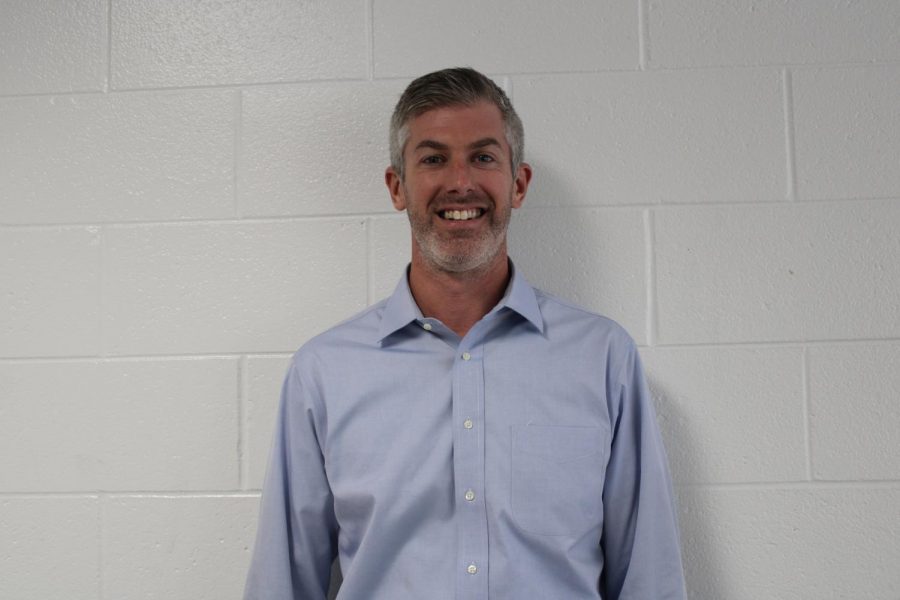 The top of one side of history teacher Kyle Carhart’s room is decorated with colorful flags from the different countries he’s had the honor of visiting, and among all the bright flags, one stands out from its peers: the Finnish flag.

Not only did Carhart live in Finland for a period of time, but he played pro-basketball there as well.

“[I had] gotten some letters from a couple of different sports agencies,” Carhart said. “One my dad and I chose to pursue was in Boston, and so we drove to Boston. There was a camp for a hundred different people who had been invited. There were some sports agents that were there, and I was one of just a handful of people who was then selected and then got a job to play in Finland as a result of that.”

And while this stint of his life—as well as most of his childhood and teen years—fulfilled his love of basketball, it also fueled his love of traveling as he got to see a variety of cities both in Finland and the surrounding countries.

“Mainly, we traveled around Finland,” Carhart said, “all different parts of Finland. I personally really liked [that] a handful of our games were in Helsinki. Sometimes, we’d stay for a handful of days there because where I played was really tiny; we only had one stoplight in the entire village that I lived in, so it was nice to go to a big city. We did travel [to] Russia as well, and it was just a different experience, way bigger stadiums, bigger teams. It’s just a unique country.”

Before playing in Finland, Carhart was a walk-on for Grand Valley State University’s basketball team; they won conferences and made it to the Elite Eight his senior year of college.

After playing in Finland for almost three years, Carhart decided to return back to school once again to get his teaching certificate at GVSU, where he had previously gotten his social studies degree, and then he got a job here at FHC to teach classes like World History, AP World History, and History vs. Hollywood.

“I wouldn’t say that I had a particular interest in [history] in high school any more than any other subject,” Carhart said, “but [I] had a couple of things that took place in college that drew me into it when I was looking at different things for the opportunity to teach, work with kids, and facilitate the experiences that I was able to have. History seemed like the best avenue and best opportunity then to find a job after college as well.”

While Carhart’s room is used for him to teach his students history, on top of the storage cabinets, he has FHC Basketball mementos proudly displayed for his students to view. He has a variety of trinkets displayed, from a basketball rim without a net to an Athletic Boosters sign that rests up against the wall. These keepsakes not only highlight a time when he played for former basketball coach, Ken George, but also his time now spent as the varsity coach.

“Some coaches, Coach George included, kind of thought that in terms of my roles within the team, that [coaching] might be an avenue that I would want to explore once I was done playing,” Carhart said. “While I was in Finland, I actually coached their youth team—12 and under team—and then also coached their 18 and under team.”

Carhart’s love of basketball wasn’t the only thing that drew him towards this new pastime of coaching, his competitive spirit helped him with this transition from basketball player to basketball coach.

“I was extremely, extremely competitive,” Carhart said. “I’ve always enjoyed the process of preparing to win or, you know, trying to prevent losing.”