He’s All That had potential that it could not reach 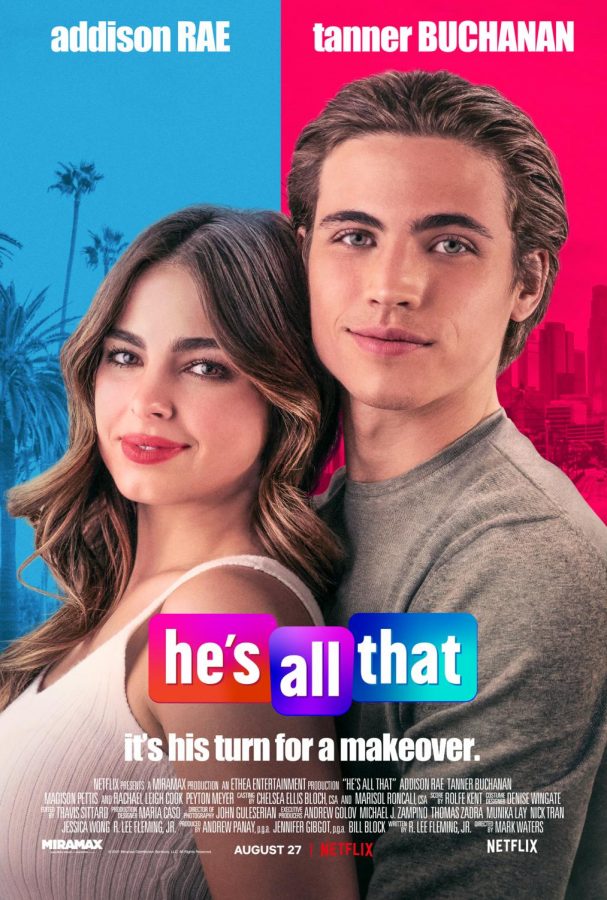 I’m not sure what I expected from He’s all That, but it both completely missed some expectations and fully met others. I knew it would be cringy, but I hoped that I could just call it a full-blown flop. Unfortunately, some aspects could have possibly been enough for it to be considered a decent movie—which ruins some of my hopes of completely bashing it.

He’s All That stars popular TikToker Addison Rae Easterling as influencer Padgett Sawyer. Padgett walks in on her boyfriend, Jordan Van Draanen (Peyton Meyer), cheating on her with one of his backup dancers, Aniston (Vanessa Dubasso). Padgett’s friend Alden (Madison Pettis) comes up with a challenge: Padgett has to transform their classmate Cameron Kweller (Taylor Buchanan) into the next prom king.

Cameron is mostly a loner; his only friend is Nisha (Annie Jacob). He doesn’t seem to care for social media, but his younger sister, Brin Kweller (Isabella Crovetti), is a huge fan of Padgett. Brin is more than happy to help Padgett with Cameron, but she doesn’t know that it’s all for a bet. Of course, it’s simple for Padgett to transform Cameron because she specializes in makeovers as an influencer, and her followers would help guide his rise to fame.

Despite Jordan having cheated on her, she loses thousands of followers while Jordan gains more. Padgett may have been seen as the victim if Alden hadn’t kept the live video going. Instead, the whole internet saw her throw pastries at Jordan and get a snot bubble in her nose. It was a naturally rude move from a popular girl trying to gain more popularity. Movies like He’s All That always seem to have main characters with evil friends. Luckily, in the end, Padgett made some better friends.

Cameron ended up finding out that Padgett was only kind to him as a bet. Naturally, it was just as Padgett started to fall for him. It was highly predictable, just as I expected.

As an influencer, Padgett seems real with her fans but is quite the opposite. The movie starts with her doing a get-ready-with-me live video, but she gets completely ready before filming herself “waking up.” She takes pictures and videos constantly. Her life is viewed as perfect because fans only see the parts she wants them to see. Also, she lies about living in a high-end apartment when she really lives in a small house with her mother, Anna Sawyer. Anna is played by Rachel Leigh Cook, who played Laney Boggs in She’s All That.

Including an actor from the original movie was something I didn’t expect from the She’s All That reboot. The movie had a pretty big cast list of fairly well-known actors. Peyton Meyer, who played Jordan, also played Lucas in Girl Meets World, so he’s not new to reboots. Madison Pettis was in Cory in the House and the Game Plan. Myra Molly, the winner of Thailand’s Got Talent plays Quinn, one of Padgett’s friends. Cobra Kai star Taylor Buchanan is another addition of well-known actors for this movie. Kourtney Kardashian also makes an appearance as Jessica Miles Torres.

With how many famous actors and actresses were included in He’s All That, I’m not sure why Addison Rae Easterling played the main character. I’m fairly certain that Easterling never made TikTok POVs, which are acting videos. She rose to fame as a dancer, not an actor or singer. Even though I don’t agree with Easterling being cast as the main character, I understand that she wouldn’t want to be seen as a TikTok dancer forever. That would be a hard thing to be boxed into. She didn’t do terribly though.

As I said previously, this movie did have potential, but there were small details or scripted details that took my mind away from the actual movie. For instance, Padgett is passing out flyers for a car wash fundraiser for her school’s prom in one scene. She passes out flyers at one camera angle but when the angle next changes, she isn’t passing any out. The flyers sit on top of her binder as she makes a motion of passing them out, but has none of the flyers in her hand. In a later scene, she starts dancing while singing karaoke. When I looked closely, I could see her arm disappear and then come back as if the green screen wasn’t edited properly. I wanted to cry when Cameron showed up on a horse at the end. It was incredibly predictable and I’m positive that I saw Peyton Meyer do it in Girl Meets World when I was nine.

In total, I did not enjoy He’s All That, but it was not as bad as it could’ve been. If there had been a little more thought put into green-screen editing and passing out flyers, as well as an actor for the main character that had some background in acting, it may have been good.