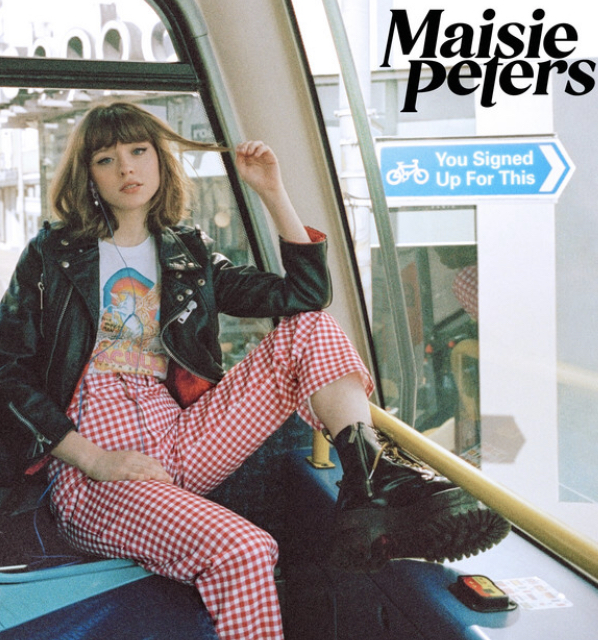 I found out about this album the same way I do with most of my music—an app that I spend too much of my time on, scrolling through pointless videos about books I should read and artists that write songs with lyrics I envy.

The first video of Maisie Peters’ that I saw was right after she failed her driver’s test for the second time, and if you are a fan of Peters in any capacity, than you know her failing her driver’s test is a major aspect of her personality. She even opens her album, You Signed Up For This, by stating her age—20—and letting us know the current status of her driver’s license—still not something she possesses.

One of my favorite songs on the album had been previously released as a single. When “John Hughes Movie” was first released, it left me feeling inspired—inspired to live my life as if it was a coming-of-age movie, inspired to start romanticizing the details of my life, inspired to write a poem that I published late last year.

There’s something about this song that makes me feel like the main character in some rom-com they play on the Hallmark channel around Valentine’s Day—but in the best way possible. I can envision this song being played right after the heroine finds out her ex was cheating on her and she’s decided she needs a night out on the town, realizing she can do so much better, regardless of her feelings about him.

The song itself is easily memorizable which makes it perfect for sing-alongs; it’s a song that has rightfully earned it’s place on the Spotify playlists that I listen to while writing opinion pieces like this.

“Psycho,” a song that starts with horror movie-esque sound effects, is the perfect song to play on repeat in your car. It’s one of those tracks that makes your foot press harder against the gas pedal as you’re driving down the highway; your whole body can’t help but rock out to this stellar anthem.

I appreciate the fast-paced crescendos of this song that keep my attention focused on every word that she sings to the melodic beat.

This song has been, and will be, the song that accompanies me on late night runs to the store and drives where I’m chasing the sunset and her light.

On weeks like these, where I seem to have never ending assignments and tasks, the slowed down pace of “Talking To Strangers” is an appreciated treat as I try to tackle my to-do lists during my short pockets of motivation.

This song seems to perfectly encapsulate the idea of being so in love that you start sharing details with strangers so that they may experience pieces of your loved ones. It masters the art of storytelling and conveying emotion through lyrics and melodies. I adored the rosy-haze this song seemed to emit while it lightly drifted through my phone speakers next to me on my bed.

The lyrics stained the quiet space around me and helped me get some of my work done by erasing the silence I’ve come to hate.

The album itself is full of songs that fit specific situations that I felt were vague enough to seem similar but specific enough to have a story backing them up. The release of this album filled me with joy, but I was even happier to learn that Peters passed her driver’s test shortly after releasing it.