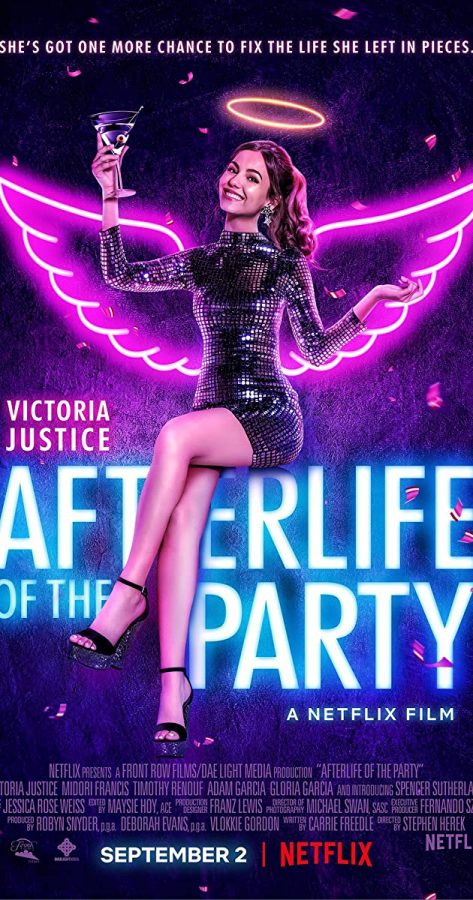 Afterlife of the Party Netflix poster

Netflix has a long history of putting out original movies that, for lack of a better word, are cringey: The Kissing Booth, To All The Boys I’ve Loved Before, and more recently, He’s All That and Afterlife of the Party.

Like many other people, I have fallen victim to the Netflix original movie phenomenon. Every movie seems to follow the same plot—even though many of the movie’s themes differ greatly—and Afterlife of the Party is no exception.

The movie is about two best friends—Cassie, played by Victoria Justice, and Lisa, played by Midori Francis—who have a falling out about their different lifestyles. The pair agrees to not be best friends anymore just before one of them faces sudden death. The afterlife then greets her with a list of people she has unfinished business with, and in order to move on peacefully, she must fix her mistakes with those specific people.

In the beginning, the movie lost my interest almost immediately. The scenes were chaotic, and if the plot wasn’t already mapped out in the title, I would have been completely confused.

For example, although the movie didn’t specifically have any real connection to music,  it was a focus for the main character with no real explanation why. This left me wanting more background on the main character, but, unfortunately, she remained underdeveloped and lacking appeal.

The movie took place within the span of one week. In the beginning, the main character, Cassie, appeared to be a relatively mean, or at the very least thoughtless, person. She had little respect for her friends and family and was clearly headed down a bad path. Yet somehow, less than a week later, she was able to completely change her ways. Hypothetically, if we put the timeline aside, I still don’t think the character had enough redeeming qualities to make me care what happens to her—which is the whole point of the movie—after she was so rude and annoying at the start.

Along with that, and the obscure musical aspect of the movie, other characters had hobbies as well. Those hobbies included things such as baking, yoga, and science. It seemed like every character had competing storylines that wanted to seem important, but did not have enough background to capture the viewer’s attention. Not to mention that none of these plots were tied together in a graceful way making it even more difficult to stay interested.

However, despite all this, me being the rom-com lover that I am, I had high hopes for one of the movie’s love interests. Sadly, I was wrong.  Although the flirtatious banter of these two kept me entertained for about twenty out of the hour and forty-five-minute movie, once again I was left unsatisfied.

Many of us have fallen victim to the Netflix original movie phenomenon; however, this movie, unlike many of the others, doesn’t have a comedic appeal or even a worthy love story to get us through the cringe moments as we watch. Instead, this movie feels like a mash-up of ideas with no real plot, and just like its main character, it doesn’t have any redeemable qualities.