Were the men’s Met Gala fashion choices perfect or plummeting in the eyes of the public? 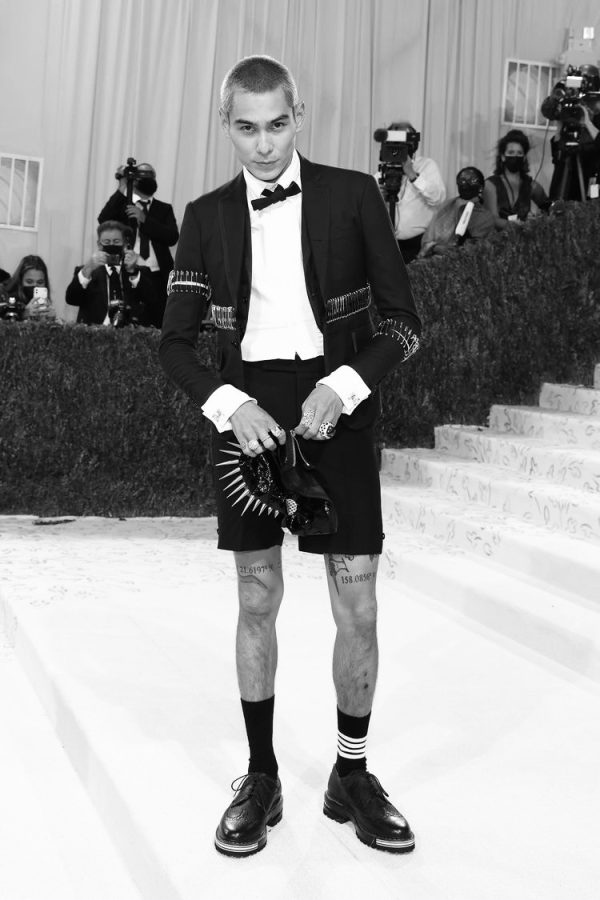 Every year, the guests of the Met Gala dress to impress as they walk in front of photographers and fellow celebrities. While some people’s looks are too basic or even considered a flop, others are beautifully executed, and the designers are obviously geniuses.

While the women of social media, arts, and acting usually steal the show at this event, the men, this year, put their best foot forward into their own version of fashion.

One of my favorite things about 2021 as a whole has been people’s take on hair dye and crazy colors. A pop of color in places that aren’t expected is one of the easiest ways to make the cameras point your way. 24-year-old model, actor, and skateboarder, Evan Mock, took first place, in my mind, for best hair. It seems that for some time, Mock has had his hair dyed pink, and I’m glad to see that he didn’t change it or dull it down for, arguably, the fanciest night of the year.

Some men took old-school Hollywood chic too seriously and showed up in white suits with black ties; I thought this was very disappointing and didn’t live up to how 2021 has portrayed fashion as a whole. While Kit Harington, one of Britain’s newest hit actors, showed up in exactly this, despite his good looks and slimming suit, it didn’t live up to expectations.

Someone who completely blew any standards out of the water was Montero Lamar Hill, otherwise known as Lil Nas X. Hill is known as an artist who makes controversial music videos and eccentric musical options; while I was excited to see what he was going to wear, I was still surprised by his choices. Wearing a gold and black, bedazzled bodysuit, Hill represented Versace with a statement that you couldn’t miss even if you tried. But before this unique outfit was revealed, Hill showed up to the Gala in king’s robes which was an extravagant touch; underneath these robes was a gold-plated suit or armor that portrayed his personality and style perfectly.

While I stay on the fence for any future buyers of these outfits, Hill’s multiple choices and changes were not out of this world compared to others. The man who confused me the most was singer Frank Ocean. I absolutely am obsessed with his jewelry choice and hair color, but I’m still lost about the robotic, alien baby.

At first, I thought it was just a doll who Ocean thought would make a statement, but with further research, I found that the baby could blink and also occasionally wave at fans and photographers. While I’m the type of person to be completely open to subjective fashion, this crossed the line. I was appalled by something so weird and lifelike that I couldn’t watch any videos of Ocean—it freaked me out so much. While I’m not sure what Ocean was trying to achieve stylistically, I thought we had left the Area 51 memes in 2019.

While it may sound contradicting to my argument about taking the American independence theme too seriously, 25-year-old Timothée Chalamet played it safe by sporting a white, head-to-toe look. While he was only wearing a suit to the Gala, the fan-favorite actor made this outfit look fun and slightly more casual, which was completely different from any other look that night. Most men were spotted wearing black dress shoes that probably cost hundreds of dollars, but Chalamet was caught wearing white, Chuck Taylor, high-top Converse.

While Chalamet made a statement with only his shoes, I thought this was the perfect way to keep his look young and not too serious, which is something that most young women love about the well-rounded actor.

American designer, Heron Preston, pulled out the oldest trick in the book: a black tuxedo, and I hated it. Preston’s own designs are strictly street-style clothing that would probably be found in the bustling city of New York, but he didn’t stay true to his brand—quite literally. While I didn’t expect him to sport one of his own designs, disappointment was an understatement for how I felt to see something so basic from such a genius mind.

While a couple more men fell into the category of too boring to pay attention to, Troye Sivan would not be joining them. While Sivan’s look was also plain and black, he gave fans and photographers what we were looking for: representation of the LGBTQIA+ community. Sivan wore a black, slip gown and black, wedged boots. The outfit was eclectic in the fact that each part of his look seemed so different but did work together perfectly overall.

While not everyone’s look was well put together and unique, a lot of special men used passion and art to fabricate stunning outfits that will only raise the bar for the next Met Gala. While some did not meet expectations, others made up for the lack thereof. Hopefully, more men will step up next year for an even bigger event than this and can learn a thing or two from others who can proudly call themselves individuals.