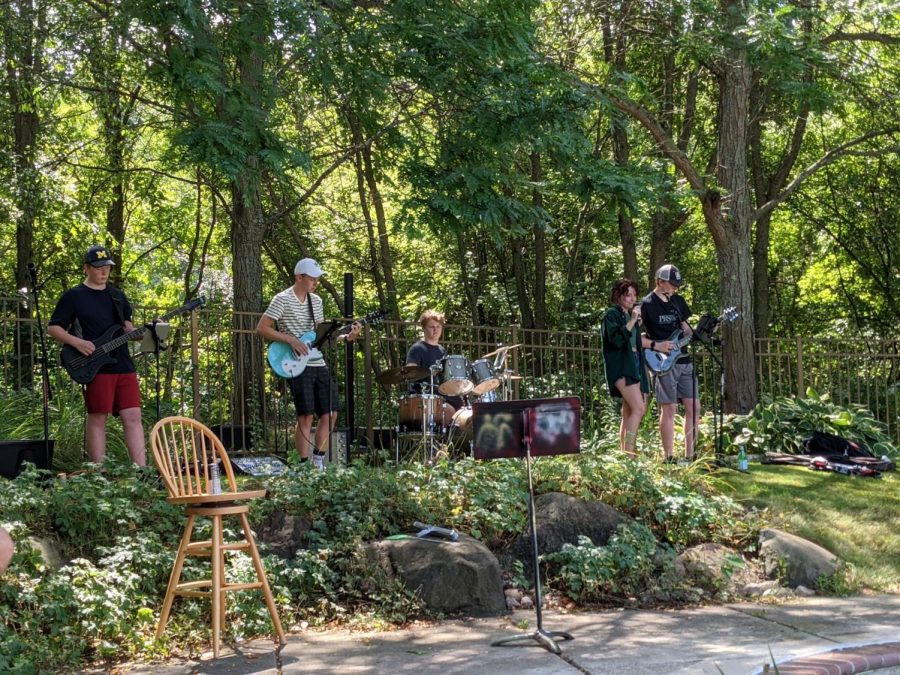 In fact, their band, Revival, takes on many different angles that stray away from stereotypes. For instance, what brings them together is not only the music that the band produces as a group but the friendly bonds they’ve made along the way.

“If you have a great band with people that you really enjoy playing with, you don’t really need an incentive to keep going,” Katie said. “You already have such a great time–they’re great people.”

Not only is the friendship the three of them share something to admire, but they each possess an insane ability to pick up the melody of a song quickly.

“I really enjoy being able to hear all the instruments,” Katie said. “I play the guitar, but I’m not very good at it, so it’s nice to be able to hear people who are such incredible basses, guitarists, and drummers play because I could never do that. I really like playing with the band, and singing is the best way to be able to hear everybody.”

On the flip side, one of the perks of being a remarkable guitarist like Ben is that he never has to take on Katie’s role as lead singer, and frankly, he is perfectly okay with not being someone he isn’t. Ben uses the power of his guitar as a way to express himself.

With each of the unimaginably talented members of Revival, there can sometimes be dissension amongst the young musicians. Usually, their disagreements aren’t of an unfriendly or malignant nature; it mostly has to do with their music tastes. To the band members, it’s nothing too serious and the tension will subside quickly.

Ben stumbled upon his band and his studio, Red Rose Music Lab, all because of a car his dad purchased for $25. As for Katie, she found her love for playing in a band at her studio through a friend that sang at a 4th of July gig. Her mom acquired a Luke James card, the old owner of the studio, and from there, she was put in a few bands and fell in love.

Now, the band is taking on its fourth revamp, hence the name Revival. All because of their studio, they’ve found some lifelong friends that share a similar passion for music.

“I find it so crazy how we can get a new song and [the rest of the band] can pick up the pieces in literally 10 seconds,” Katie said. “We can do a run-through with the music once, and they already have it down. That’s incredible.”

Both Katie and Zachary find it astonishing what their band can achieve. As for Zachary, he adores his bandmates and the memories he’s making.

“I really love the band I am in,” Zachary said. “It is a great out-of-school experience with even a few friends from FHC and a couple from other schools. It is a great little group that gets together every other Wednesday and plays songs for two hours.”

Revival hasn’t faced any real hardships until the switch of their music label from Luc James Music Studio to Red Rose Music Lab. As a result of the switch, the band was left with a new person leading their practices every week and a foreign territory.

“Adapting to a new environment: that’s probably the biggest [hardship],” Ben said, “but I think we’re making good work of it.”

In addition, Katie shares a similar hardship and a memory with her bandmate, Ben.

“Moving the studio and having a totally different space to us specifically [was hard],” Katie said, “and moving the piano to the new studio [was hard too].”

The worst part about the day was moving the monstrous piano. But in the end, they were paid. Not with money, but instead with cinnamon breadsticks from JT’s Pizza. Ben and Katie hope that they never have to move the piano again and both agreed that they can live the rest of their lives happily without doing so. For the seniors, they might not have to move it again in the foreseeable future since they will be busy with their next step in life.

Katie and Ben’s last year of high school has just started. When the two graduate, they’ll still be involved with the band. For Ben, he plans on going to Cornerstone University next fall. That’s about a 10-15 minute drive from the studio. Katie, unfortunately, plans to attend Michigan State University. She is not as close as Ben, but she believes she can still contribute to the band from her dorm room in Lansing, Michigan.

Zachary, however, has the opposite situation. His first year of high school has just started and won’t cause any friction within the band.

“I would most definitely do this throughout high school,” Zachary said. “It doesn’t conflict with school at all. Playing music, to me, is a hobby of mine that I really enjoy, [and] it can also come to use in the future.”

With the little time the band has before playing at gigs, it can get hard, so they’re a little apprehensive about their upcoming performance at City Built Brewing Co.

“I always get nervous before performances though,” Ben said, “just because I have a lot of lead guitar parts, and that’s a little nerve-wracking.”

At City Built Brewing Co., Revival is taking on the Battle of the Bands, which is a competition for bands to participate in with a cash prize of $100.

“I’m a little nervous,” Katie said. “I am very nervous, but it’s exciting. Battle of the Bands is something to brag about. I guess you can be like, ‘We beat out all of these different bands.’ It is just such a great feeling going up in front of a bunch of people and then ending your gig and being like, ‘Oh, that was a great gig–like we did so good.’”

There are many words that can perfectly describe the band’s feelings about their experience having a tremendous amount of fun while creating music they all share a passion for, but there’s one aspect that knocks all the other competitors out.

“Satisfaction,” Ben said. “I mean, there’s nothing better than an amazing ending to a performance.”