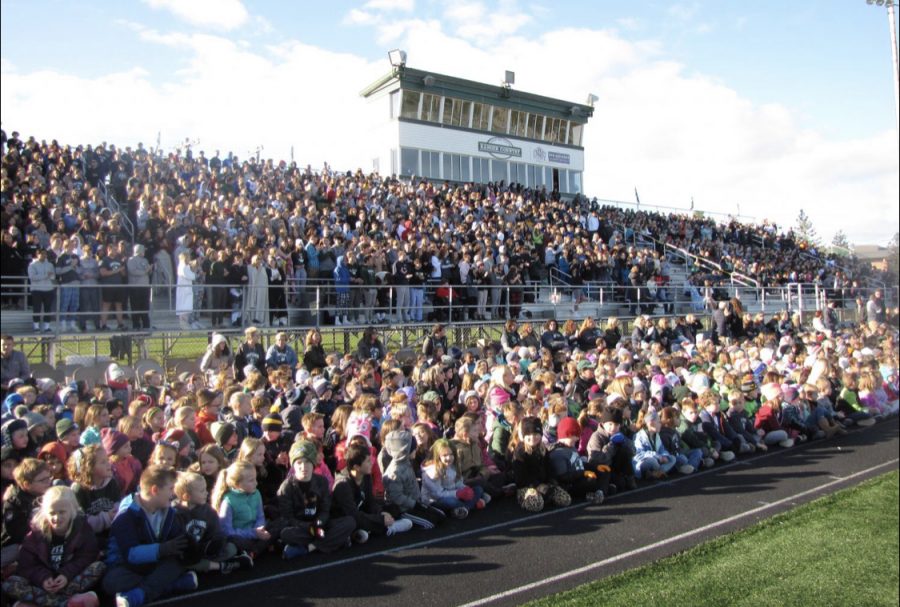 This event has been postponed until further notice because of a thunderstorm warning on Monday morning.

When history teacher Brad Anderson was a student at Pine Ridge Elementary School, he thought high schoolers were comparable to superheroes.

“When I was young,” Anderson said, “I didn’t even know what high school I was going to go to. I went to Pine Ridge, and I never came here—I didn’t know what it was like. When we had visiting high schoolers, they were like all-stars. I mean, they were superheroes to me.”

In an effort to get younger students more comfortable on campus and to show them all the different activities they can get involved in once they are a few grades older, the Ranger Rumble assembly was organized. Anderson and other staff members wanted to work together to provide a way for younger students to acquaint themselves with the high school so they didn’t run into the same things he once did.

Because of COVID-19 and the precautions the school is trying to take, this year’s Ranger Rumble will only be high school and middle school students. However, teachers at Central Woodlands and the elementary schools will have links so that classes may attend this Ranger bonding event virtually. And even though the guest list will be a tad bit smaller this second go-around, Anderson is beyond excited to use this assembly as a way to bring Ranger Country together and to make the high school the center of our community.

“[Assistant Principal] Mr. [John] DeStefano and I, years ago, had a chat about how to bring people together,” Anderson said. “The high school is the center of our community. I live in the village of Whitneyville. I have an Alto phone number. [I have an] Ada address, but I live in Cascade Township, and I work for Forest Hills Public Schools. There are multiple identities to being in Forest Hills. The schools are the center of the community for everybody.”

Like Anderson, business teacher Kristin O’Brien agrees that this assembly was a tradition worth bringing back after last year.

“It builds that Ranger community,” O’Brien said. “The kids coming up can see what kinds of things we do at the high school. It’s something really memorable for them.”

For younger students, this is one of their first chances to see the out-of-this-world traditions the high school holds. They get to watch all the fall athletes run onto the field, watch the dance team perform on the turf, and enjoy the band play a few songs.

Trustee for the senior class Remmie Gavle believes this assembly is the perfect way to bridge the gap between high schoolers and younger students in the district.

“I think the first year’s [one] was a huge success, and I’m excited to see it happen again,” Remmie said. “I hope, in years coming, it will be another wonderful tradition of FHC. I think it was a great addition the first year, and all the students got a kick [out of] it and enjoyed it. I’m looking forward to many more years of the little kids coming to see the big kids.”

The general consensus is that the Ranger Rumble, even though it’s only in its second year, has become a vital part of Homecoming and does a wonderful job of kicking off this festive and highly-anticipated week. Senior President of the Executive Board Roman Kalaczinski agrees that it plays a vital role in the Homecoming tradition and also gives older students a glimpse into the future.

“I think it’s an opportunity for us to look at the legacy that we’re leaving behind,” Roman said, “but also, for younger kids to look at past generations and decide who they want to be when they get into high school.”

A fan favorite of the event is the pumpkin pie eating contest that is held in the middle of the stadium—it is Anderson’s favorite to be exact. Students and staff go head-to-head and attempt to eat a full pie without the use of their hands. The high school’s staff representative is Spanish teacher Carlos Silvestre, and as of Friday, they are still in search of freshman and sophomore representatives to compete.

This event that will take place at 9:30 AM Monday, September 20th, is not only about bringing our district together through eating pumpkin pie, but also it’s to help counteract some of the divisions our world is currently facing.

“There’s enough division in our world right now,” Anderson said. “We want to get people together to understand what it means to be a Ranger and [showcase] how many people are involved that make this [school] a special place to be.”

This assembly, specifically, is meant to connect all the grade levels despite whatever challenges the world has thrown at us all. It’s a chance to showcase our football team that is currently 3-1, a chance to have little girls look up to their role models on the dance and cheer team as they move about the track. It is a chance for fifth graders to see all the awesome instruments in the band as they start to think about what they want to play next year. And it’s a chance for younger students to preview all the fun that will be a part of their day-to-day before they know it.

Traditions like these are important to continue, and Anderson couldn’t agree more.

“We’ve got to stick to our traditions,” Anderson said. “There are very few things that are sacred anymore in this world, and you know, traditions mark time—they are a shared experience with previous generations and future generations. And, quite frankly, traditions are a fabric that keeps us all together. So [as] long as I’m here, which is probably another 20 years, we’re going to have these traditions, and I’ll fight hard to make sure they are maintained. At the end of the day, you remember the dances, you remember the assemblies, you remember the competitions, you remember your sports teams, and doing different things with your classmates.”