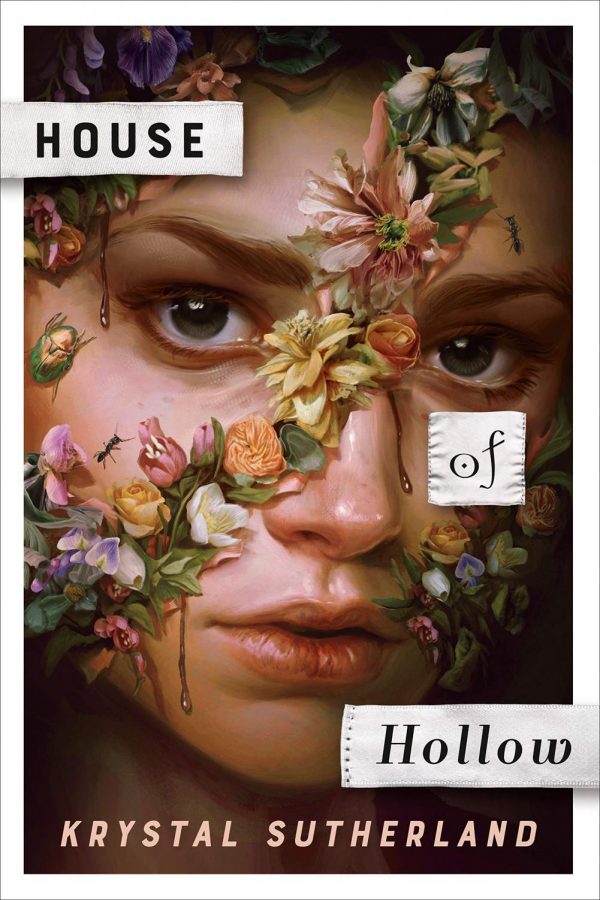 The cover art for Krystal Sutherland's book House Of Hollow.

Recently, I have found myself growing attached to books involving spooky, magical characters and fantastical surroundings. It doesn’t matter if the book is mostly romance or adventure or drama; I just love the witch vibes. House of Hollow by Krystal Sutherland encompassed all that I wanted.

On New Year’s Eve, ten years prior to the beginning of this story, three young girls went missing only to reappear a month later, naked in the street, with identical half-moon scars at the bases of their throats. Grey, Vivi, and Iris Hollow returned as different children than they once were. Their eyes were black and their hair white in contrast to their previous blue eyes and dark hair. However, they didn’t remember any of the events leading up to this strange occurrence—at least according to Iris and Vivi.

Now, Iris Hollow lives at home with just her mother, Cate. Grey and Vivi have both moved out, and their father, Gabe Hollow, took his own life after the girls reappeared. After the girls’ appearances changed, Gabe stopped trusting them. He would stand at the foot of Iris’s bed, scaring her when she awoke.

But the girls are being haunted by something much worse than the despairing death of a frightened father. Musician Vivi finds herself back in London for a gig while model and fashion designer Grey is simultaneously in London doing a photoshoot. Since the Hollow sisters rarely see each other—due to busy globe-trotting schedules and Iris’s school schedule—they plan to meet up before Vivi’s gig. Even with her busy agenda, Grey refuses to miss any plans with her sisters. That is until she doesn’t show up to see Vivi and Iris. Vivi and Iris find themselves on a hunt for their sister, following a series of bizarre clues. As they interact with supernatural beings, their forgotten past unravels, and they are drawn back to the place that they disappeared to ten years prior.

I am in love with this book—quite literally in love. I never knew what to expect when I turned the page, and I was endeared by that.

I have grown an attachment to books involving girls and supernatural-esque powers. In House of Hollow, Grey, Vivi, and Iris can bend people to their will. It only takes one taste of their skin or whiff of their scent for them to entrance another person. In the prologue, Iris describes an instance in which Grey had to distract a woman with her taste. A woman had slipped through Iris’s window and cut off a lock of her hair in the night. Iris refused to scream or show any signs of fear until the woman left her room, bound for her sisters. Cate tackled the woman in the hall, but when Grey thought Cate wasn’t looking, Grey kissed the woman. The woman shuddered and calmed until the police officers took her away.

The mysterious circumstances surrounding the Hollow sisters made it difficult for me to stop reading. I was initially drawn to the book by the description of these mysteries, and I was not disappointed.

I would be lying if I said that the cover didn’t also intrigue me. It was thought-provoking to have blood seeping from where flowers were embedded in the girl’s skin. I could only imagine what would be described in the book for the cover to include that, especially when I noticed the ants and beetles on the girl’s face; I was honestly concerned about the backstory.

The book did eventually offer an explanation for the cover, but it seemed a little late in the book, and I’m not going to lie, I did try to swat a printed ant on the inside cover away more times than I’d like to admit.

Sutherland’s writing style was also extremely beneficial to the world she created through her words. She chose to write House of Hollow from Iris’s perspective, and through that, she was able to find the perfect balance between typical teenage thoughts and illustrative word choice.

Overall, House of Hollow by Krystal Sutherland was a dark and captivating fairytale that I did not want to put down.