Harry Styles’ “Love On Tour” shows the world that despite COVID-19, we can all come together under one roof to make things feel normal again 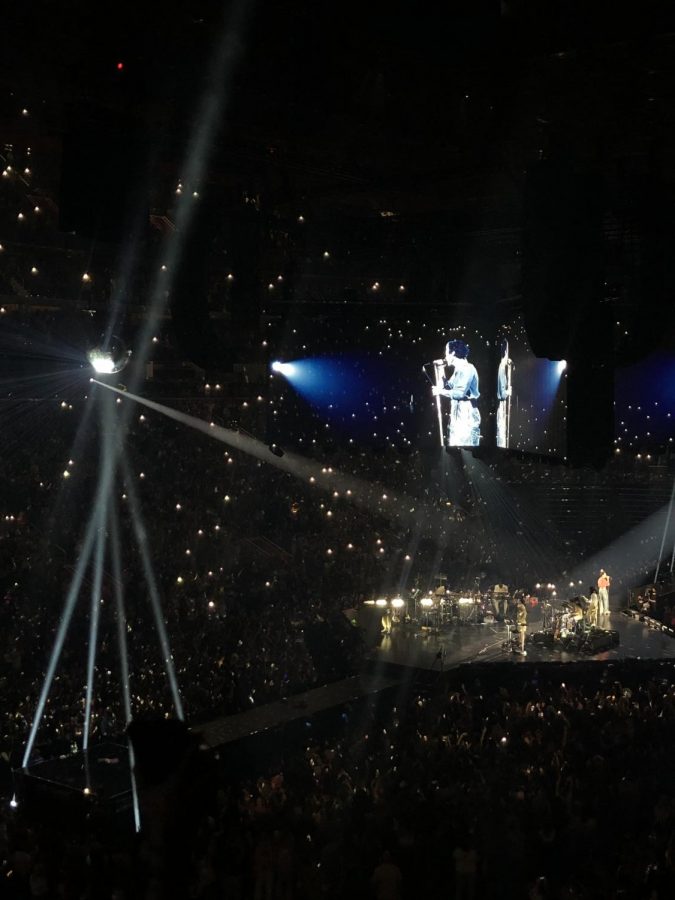 Performing since age sixteen, twenty-seven-year-old singer and songwriter Harry Styles seems to be used to the spotlight shining in his face for the majority of his life; it’s hard to remember a time where Styles wasn’t the face of pop music.

Styles started his career auditioning for the British version of America’s Got Talent, X Factor, and now, Styles is touring the U.S. on his “Love On Tour” arena tour. While September 20th marks his ninth show, Detroit’s Little Caesars Arena held, arguably, the best performance from Styles so far.

Performing an array of songs from his first solo album, HS1, all the way to his latest work, Fine Line, Styles puts on a performance that fans will never forget.

The show was originally planned to be done in the summer of July 2020, but since COVID-19 hit the world extremely hard in that year, Styles decided to postpone the show for a year and a half later.

I originally purchased the tickets off of Ticketmaster at the very start of 2020 with a group of my closest friends thinking that the performance would be any Directioner’s dream; I wasn’t a huge fan of Styles as a solo artist at the time. While it was a blessing in disguise, I was extremely disappointed that COVID-19 was taking everything from my normal life, not just school. But now, I see that everything happens for a reason.

My friends and I drove six hours collectively from our homes in Grand Rapids all the way to the East side of the state to see, now, one of our favorite artists in a setting that we weren’t able to be in for what seemed like forever.

I grew up attending a lot of concerts, my first being Nickelodeon-made band Big Time Rush, all the way to my latest in-person concert: country and pop phenomenon Kelly Clarkson. While seeing someone on a stage, performing live was something that I’ve been used to, Styles easily is a competitor with singer Taylor Swift for the best concert I’ve ever attended.

Not only did Styles put on a show that was somewhat interactive, which everyone would love despite their level of obsession, it also was encased in a layer of nostalgia for most hardcore fans. Harry reenacted a few inside jokes from his time in One Direction, referencing his show as “a family show,” but he also sang “What Makes You Beautiful,” one of One Direction’s first hits that set Styles up for success early in his life.

I found that being a full-fledged fan at his concert was much more enjoyable than not knowing the majority of the setlist like I would have found myself back in 2020. While I could go on and on about each song that Styles performed, for me, it wasn’t so much about the musical experience but the sense of accomplishment and gratitude.

2020, as we all know, was such a difficult year that tested everyone’s survival skills; whether they were completely aware of it or not. Being able to attend a concert a year and a half later is such a big accomplishment for us as a society. While each one of Styles’ shows requires the audience members to be fully vaccinated and wearing protective face coverings, everything felt normal for once.

At the start of the show, Styles had a pre-recorded message thanking his fans for not only attending and supporting him but also following the regulations and guidelines to keep everyone safe. It’s obviously important to Styles and his management team that they can continue to put him out on a stage for as many months as possible; the end goal being completing the tour.

Most fans in the arena were respectful of management and Little Caesars wishes of them to be wearing masks the entire show, it was beautiful to see everyone coming together and being safe about it.

Not only should Styles feel accomplished in his own earnings and successes, but he should also look up from his spot on stage and see each one of his fans supporting one another through following these guidelines.

It means a lot, as someone who loves music and concerts, to see that other people want there to be more tours, from all artists, in the future. Each fan was very respectful, well dressed, and overall, grateful to be there.