Girls Soccer: From Failure to Focus 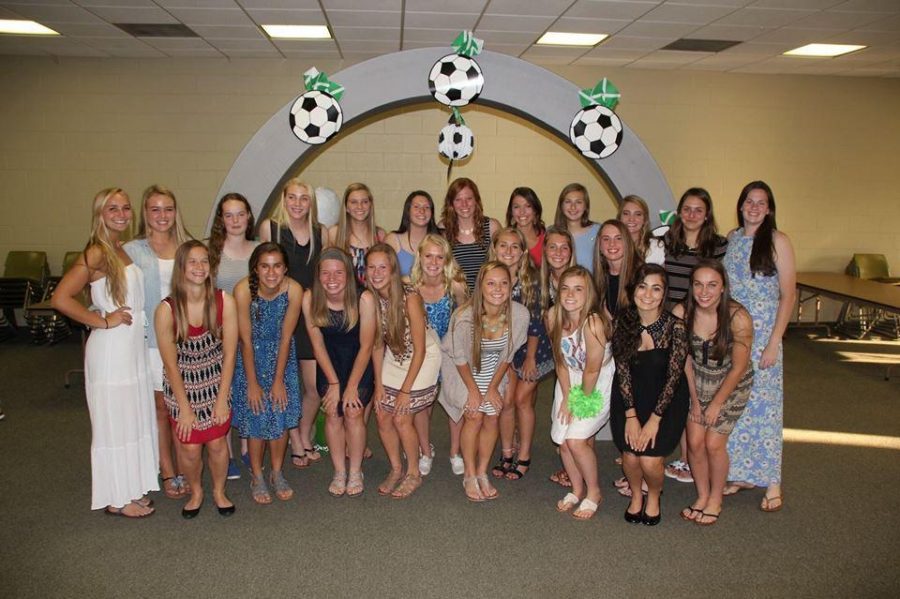 With the coming of summer, many sports seasons are coming to a close. For some, it was merely just another season, with ordinary games and just a few wins. But for the varsity girls soccer team, it was more of a chance to really prove themselves.

“We lost 9 out of the 11 starters last year so many people assumed that it would be a ‘rebuilding’ year for our team,” junior Mackenzie Currie said. “But that’s not what it was at all.”

According to Currie, multiple teams and coaches underestimated them from the start. With the loss of the previous year’s seniors, they struggled to make it back to the top. Jeremy Stacy, coach of the girls soccer team as well as civics teacher, believes that the team, as a whole, started out less successful than they had in years past.

“It started out a little rough,” Stacy said. “We had a losing record at one point, which is the first time in a long time that we’ve had [that].”

Despite the struggles, Stacy believes that they had quite the benefit from the multiple losses.

“I think we had a better perspective than we have in years past,” Stacy said. “Where you know if and when we lost it wasn’t the end of the world. We were able to pick ourselves back up from failure and build more than we have in the past because of that.”

Moving on from the losses was not all the team did. From failure to focus, the girls “turned it around midway through the season [and] figured things out.” After that, the team managed to win the conference, beat one of the two time best defending district two state champs, and played well at districts. They took some big strides and managed to make a lot of improvements. To Currie, the biggest team improvement was working together.

“At first we all had to practice and find some team chemistry,” Currie said. “But once we got that down we really started to dominate.”

Senior Olivia Brewer agreed, stating that the new team was what really impacted their performance.

“We were a new team with a lot of new people,” Brewer said. “Once we figured out how each other played, we were unstoppable.”

As the team continued to move forward, the rest of their season consisted of multiple highlights, ranging from beating FHN to dominating Gull Lake, who had been state champions for a few years in a row. While these were all great moments, each member had their own opinion on what was the biggest highlight overall.

“I think probably the Gull Lake game [was the biggest highlight] cause everything kinda came together and we realized just how good we could be,” Stacy said. “We doubted ourselves for awhile, and that kinda proved it to us, that ‘hey, you know, we’re just as good as anybody else out there’”.

Though she also believed that beating Gull Lake was a triumphant win, Currie’s biggest highlight was beating Lowell for the conference title.

“We went into the game thinking that if we won, we would have to share the conference with Grand Rapids Christian,” Currie said. “But in the end we ended up having the championship title to ourselves.”

With so many accomplishments, its not surprising that this team has formed friendships that will last on and off the playing field. For Currie, her favorite part of being on the team is playing with her friends.

“It is always a very positive atmosphere on and off the field,” Currie said. “We all have a lot of fun.”

Stacy agreed with Currie, stating that as a coach, he thinks that the relationships among teammates are the main important thing.

“Its intense, it’s competitive, but its fun,” Stacy said. “I think that with this year especially, we had a great perspective on the things that were important, which is the relationships with our teammates, how we care for each other, how we care for other people.”

Brewer’s perspective proved Stacy and Currie’s words to be true, as she focused more on the friendships she has formed with the underclassmen.

“We have bonded so much over the season and I am really going to miss them,” Brewer said. “They all have unique and crazy personalities that I am never going to forget.”

Overall, this team has traveled down an interesting path. Their season consisted of overcoming obstacles and coming together to take down their rivals. But despite that, Stacy noticed one specific thing about this team.

“They’re just a fun group to be around and they’re just fun to coach,” Stacy said. “I think that I had more fun this year with this group than I have had in a long long time.”