A Recap of “The Game”: Ohio State vs Michigan

Joe Freihofer breaks down the biggest match up of the decade between the Ohio State Buckeyes and the Michigan Wolverines. 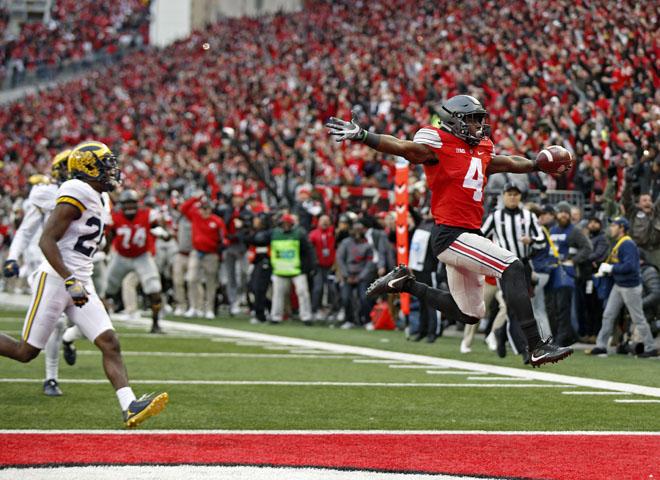 Ohio State Buckeyes running back Curtis Samuel (4) jumps into a the end zone for the game winning touchdown in a double overtime win over Michigan Wolverines touchdown at Ohio Stadium in Columbus, Ohio on November 26, 2016. (Kyle Robertson / The Columbus Dispatch)

It was the biggest match up between two bitter rivals in an entire decade. The way that the game ended will surely go down in the history books and have both sides talking for years to come.

The Ohio State Buckeyes knocked off the Michigan Wolverines 30-27 in a double overtime victory that kept everyone on the edges of their seats for an entire four quarters, and then some. The Wolverines looked to be playing extremely well in the first few drives of the game, forcing the Buckeyes to two field goals that were both missed by the senior walk-on Tyler Durbin. Michigan quarterback Wilton Speight played well for most of the first and second quarter until he was picked off by sophomore Malik Hooker. Hooker intercepted the pass and took it into the end zone himself for a 16 yard TD. Speight was playing through a pretty severe shoulder injury, but he looked poised and collected. Buckeye quarterback J.T. Barrett, however, looked uncomfortable and rattled throughout regulation time. Barrett struggled to find rhythm through the air and relied heavily on his feet to get things done. Ohio State also tried to find a spark by targeting their most dangerous playmaker, Curtis Samuel. Things were going the Wolverines’ way in the first half. After Ohio State’s interception score, Barrett tried to sling a ball into the hands of Samuel but was picked off by the most electric player wearing the maize and blue, Jabrill Peppers. Peppers seemed to have a quiet game and was not himself defensively. Michigan as a whole looked fantastic on defense and created all sorts of problems for Barrett and the Buckeye offense. The Buckeyes were 3 for 16 on third down conversions, a daunting statistic for any team to deal with.

Despite Michigan’s efforts, errors and a tough Buckeye defense held off Speight multiple times. The junior Michigan quarterback drove his side all the way down the field to the one yard line, only to fumble the snap under center and give possession back to their counterparts. After regaining possession of the ball, things began to go south for the Buckeyes. Ohio State attempted a fake punt on fourth down on their own 15 yard line, only to be stuffed 5 yards short of the first down marker. Michigan then roared back and scored on a short toss to their fullback Khalid Hill, giving them the lead.

More passing errors for Michigan and a late offensive push gave the Buckeyes a chance to force overtime. Durbin, who had already missed twice, was on the clock again. This time, the walk-on managed to slot the biggest field goal of Ohio State’s season. Overtime would follow. This is where things began to get hairy for the Wolverines.

It only took Urban Meyer two plays to get the Buckeyes a quick seven points. OSU went up seven in their first overtime possession. Jim Harbaugh and his side took all four downs to get their seven but squeaked in a beautiful touchdown toss from Speight to senior receiver Amara Darboh. Darboh has provided firepower for the Wolverines all season long. His end zone effort, however, did not seal the deal for Michigan.

The Wolverines started on offense the next drive and got no where against a fired up Buckeye defense. The Wolverines had to settle with only a field goal. Early in the Michigan drive, Buckeye corner Gareon Conley clearly had his right hand wrapped around the shoulder of Michigan’s receiver, but got away with a no call for pass interference. The mayhem did not stop there. The Buckeyes now regained possession.

Ohio State came back on offense and found themselves in a fourth down situation just like their adversaries. The Buckeyes decided to do what had been working for them all afternoon: run it with Barrett. The junior quarterback pounded his way toward the first down line, but was met by the back of his tight end Marcus Baugh. The play will forever be replayed in the minds of the Wolverine faithful. The head official on the field gave the Buckeyes a first down, although Barrett appeared to be short of the marker. The officials would then go on to review the play, but could not find substantial evidence to overturn the call. I believe that the refs did what they could in this situation, given that they had called it a first down in the first place. They must find indisputable evidence after the fact in order to flip the call, and they felt as though they were not given that after a second look. Directly after the review, Barrett handed the ball off to Samuel who dashed into the end zone for a ten yard TD. You can imagine what things were like in the horseshoe after a moment like that.

Michigan fans all across the country are outraged by the ending of the game. Most believe that the ball in the hands of Barrett on that fourth down never crossed the plane. They are also furious at the officials unit as a whole, and believe that the crew was completely biased towards the home town Buckeyes. I have a few things to say about the eruption following the game. Firstly, Harbaugh totally lost his cool at a point in the game when Michigan was clearly beginning to gain traction. This offset everything and cost the Wolverines their possession. Secondly, if Michigan deserved to win the game so badly, then why did they not capitalize after Ohio State’s two missed field goals. Instead, they drove all the way down the field only to give the ball away when they were a yard away from the Buckeye’s end zone. In a perfect world, would the outcome have been different? Of course. But nothing is ever perfect in this world. Unfortunately, it just so happened that the head official decided to give the Bucks the first down. They never found indisputable evidence to overturn the call, which is a must if one wants to flip the tables in that situation.

In the end, the game has been called and Harbaugh is now 0-2 against Meyer, a trend that the buckeyes will look to maintain down the stretch. As for the Wolverines, they will look to sneak into the playoff somehow, which looks to be extremely unlikely. They will probably find themselves in a great bowl game with an excellent test against another strong team. The Buckeyes will try to sneak into the playoff as well, but could be ousted by another Big Ten team like Penn State or Wisconsin.