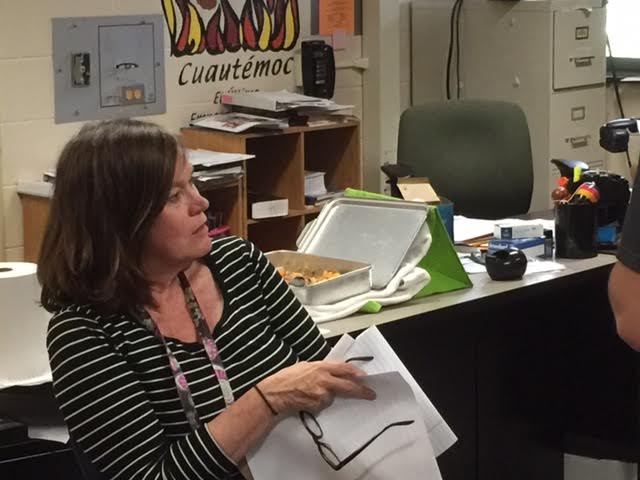 Spanish teacher Candice Malivuk sits in front of her class, interacting with students.

A slew of things dominate the room that Candice Malivuk has occupied for more than 20 years. There are piles everywhere: piles of papers, piles of textbooks and piles of artwork. As the year comes to a close, only one pile will leave with her when she retires at the end of this school year: the pile of memories.

The pile comes from three schools and 33 years of teaching; a lifetime full of memories all unique and defined. And now, as she sits among the piles of papers, projects and posters, the memories come flooding back.

Malivuk’s retirement concludes a teaching career that started in 1971. She started teaching at Ionia High School when she was only 21 years old. After two years there, Malivuk moved and taught at FHN for many years. After teaching at FHN for about 7 years, she stayed home with her kids for another seven. She then got a job at FHC, a school where she would retire with many memories, friends, and emotions.

“It’s bittersweet, I have so many different ideas and it’s so hard to turn that off,” Malivuk said. “You are constantly trying to think of new ways for kids to learn things and make it interesting and fun and it’s very hard to turn that off. And I keep thinking ‘what will I do with my mind when I am not doing this’ because it has been part of me for so long.”

Malivuk’s retirement comes at the end of a tumultuous school year.  At the beginning of the school year, Malivuk was planning to retire after a recent move to Holland, but in the middle of the year, she grew attached to the kids and decided that the drive wasn’t too bad and she could do it for another year. This philosophy changed with one phone call. That day changed everything.

Malivuk’s breast cancer diagnosis came in the morning, but that didn’t stop her from teaching that day.

Initially, she wasn’t going to tell her students, but her teaching days were consistently being interrupted by phone calls from physicians and family.  So, despite her typically reserved nature, she decided to tell one class.  Then another.  Then all of them.

“The kids were all supporting me,” she said. “We are ones who are supposed to be supporting them, not the other way around and the kindness that I felt was just and has been amazing. The sharing part – not the cancer part – has been one of the best experiences.”

After many tests, the diagnosis took a positive turn. A lymph node biopsy showed the cancer wasn’t spreading.  She could go back to work.

“Then I thought, ‘well, things are pretty good’,” Malivuk said. “I’ll just try to get through the year.”

Malivuk’s students were right there with her through the difficult times this year.  Junior Gabi Dykema remembers the classes.

“You could tell something was wrong,” Dykema said. “She was looking more and more sad.  The day that she told us, it was really out of the blue and nobody expected it.  It was really emotional because I’ve never had anyone close to me have cancer.”

“My favorite memory was doing these crazy Spanish workouts in class,” said Lila Gillespie, who graduated from FHC in 2013.  “Spanish has helped me recently as I traveled to Europe and was in Spain for sometime. This helps me get around and communicate.”

Forest Hills Central French teacher Laurie VanHouten has worked with Malivuk for 26 years and is obviously sad to see her go.

“She’s a brilliant, funny, dedicated teacher,” VanHouten said.  “She is always striving to be better.”

The cancer diagnosis hit VanHouten especially hard, but the positive turn has helped.

“She’s so lucky that they found the cancer so early, so she will be fine,” VanHouten said. “I remember feeling really sad when she told me and then I felt relief because it was a very early stage and in that, there would be a very minimal medical things that she would have to go through.”

Malivuk’s focus now has turned to the next stage of her life. Malivuk has taken many trips to Spain and Mexico, and she looks forward to visiting some new places: Cuba, Galapagos, and all of South America.

“Sometimes the kids are doing things that I have always wanted to do and haven’t been able to do,” she said. “And now I can.”

As Malivuk ends this school year, she has many questions but she knows the answer to one thing.

“I am not one who does not work,” Malivuk said sternly. “One thing that I would like to try but I don’t know if it will work out is being a translator for a medical office, and helping people understand.”

Although Malivuk is heartbroken that she will be leaving FHC,  FHC has left her with a lasting impression that will follow her wherever she goes.

“This is a wonderful, compassionate and giving community,” Malivuk said. “I am very proud of of what our students are accomplishing and giving back to our community. We are raising good people in Forest Hills and I am proud to have been part of this.”