The darkroom is a restoration of passionate creativity and vintage pursuits 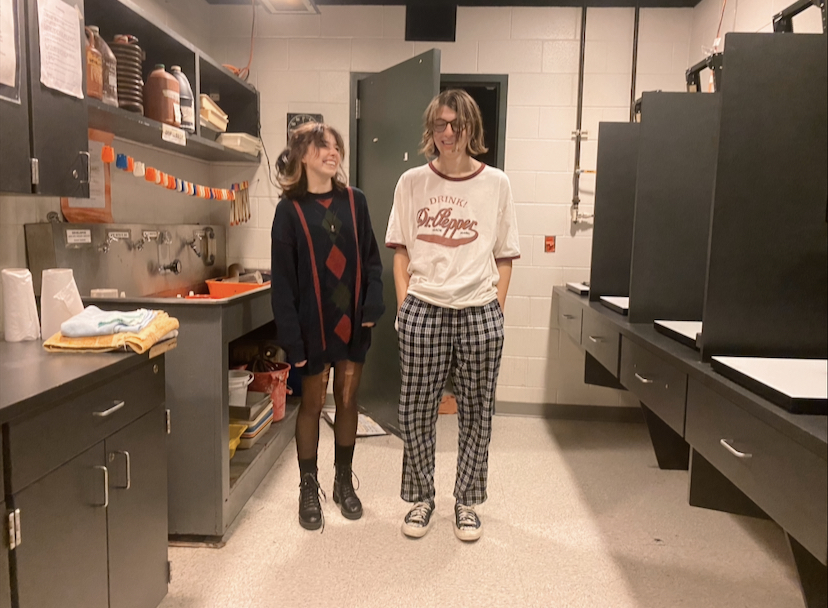 Senior Josh Treichel had his doubts about film photography at first.

When he originally laid eyes on his friend’s old film camera, his initial thought—to be exact—was, “What is this hooligan doing?”

“It was one of those old metal grandpa cameras that he obviously got at an estate sale,” Josh said. “And I was like, ‘That’s so weird. Why are you doing that?’”

But when Josh’s friend sent him the developed shots of himself, Josh became enthralled with every technical detail of film photography. With the point-and-shoot auto-focus camera that his friend gifted him, he began a journey that landed him alongside senior Katie Hoffman, working on and within FHC’s darkroom.

Tucked into the back corner of the art department, the darkroom has remained untouched for several years. But this year, through an independent study under the tutelage of art teacher Grace Stynes, Josh and Katie are rekindling the room’s purpose and becoming acquainted with a vital aspect of the process they both love.

It’s in the dim shadows of the darkroom that the magic of film development occurs. Because film photography is entirely dependent on a millisecond of light to capture a moment, the development process requires total darkness.

“With the room and how you develop the film, it’s not like you can mess it up, be all silly,” Josh said. “It’s very specific, down to the seconds. If it’s slightly off, it will completely ruin everything. That’s the thing. If we slightly mess it up, which we do, it just ruins everything. So it takes a lot of patience.”

So far, Josh and Katie have been mostly engrossed in a process of trial and error as they attempt to successfully process their photography. But before they could even reach that step, they had to restore the darkroom’s basic functions.

The room’s years of disuse left it in various states of disarray that weren’t immediately visible to the untrained eye, such as expired chemicals and broken equipment.

“Ground level was walking in here and realizing all of the chemicals are expired,” Katie said. “Everything is expired, I think maybe two of these enlargers actually work, and we still have yet to actually test it. Then [it was] just realizing that it is going to be a longer process than we thought.”

While this has exacerbated some of the difficulties Josh and Katie have faced in developing quality photos, it has also made their learning process that much more gratifying. Through discovering what methods work, which ones don’t, and why, they’ve established a much deeper understanding of film photography than they could’ve in a less involved environment.

During the early days of this project, working through the wrinkles in the process required innovative communication techniques from Josh and Katie.

“Josh and I have separate hours for independent study,” Katie said, “so we had sticky notes everywhere saying, ‘This isn’t working,’ so I would see it at sixth hour, and then we’d communicate through sticky notes.”

From sticky-notes plastered on the walls to the time Josh and Katie have spent after school developing film together, they have held nothing back from this project in terms of their passion and devotion. This commitment has bonded them not only with each other but also with Stynes.

Stynes’ own experience developing photos in the darkroom at her alma mater has proven invaluable to Josh and Katie. She is proud to let them take a significant portion of the ownership over the darkroom—as they establish their goals, research, and shoot film inside and outside the school—but she is also there to offer guidance, specifically in the actual developing process.

Reminiscing on her college days, Stynes is reminded of what was so attractive about the film development process.

“I lived in a residential dorm,” Stynes said,” and our photo developing studio was in my dorm, and you just needed a code and you could go in any time of day. So I would go in in the middle of the night and develop my film, and I think it’s just a lovely, quiet, meditative process. You have to be really mindful, and you’re keeping track of time, and it’s dark in there. So I just think I was really attracted to it because it’s this really lovely solitary thing.”

Stynes is grateful to be able to afford Josh and Katie the opportunity to delve into the aspects of film that she didn’t get to explore until college. Aside from the bond that they’ve formed through making mistakes and learning together, the three of them share an appreciation for art in this particular form.

When she looks back on the person she was in high school, Stynes senses an innate connection between her and Josh and Katie.

“I think I was probably a lot like Josh and Katie in high school,” Stynes said. “I was taking film photos; I was an artsy kid. I would walk around with my film camera all the time, and I had to send my film out to get developed, and it always felt like I was missing out on what film was all about and missing out on the development process.”

This sentiment is exactly what drew Josh and Katie to the darkroom in the first place—feeling that something was missing from the process that they love.

And now that they are immersed in every aspect of not only shooting film but also developing it, Josh and Katie are capable of appreciating film photography in all of its vintage glory.

“It was so great being able to take all these photos on my camera and then have negatives and my photos sent back to me,” Katie said, “but you’re missing such an essential piece of the photography process. Developing your own film is such an interesting experience, so being able to develop my own film here, it just makes it feel so much more genuine.”