Although the future feels far, at least these moments have stars on them 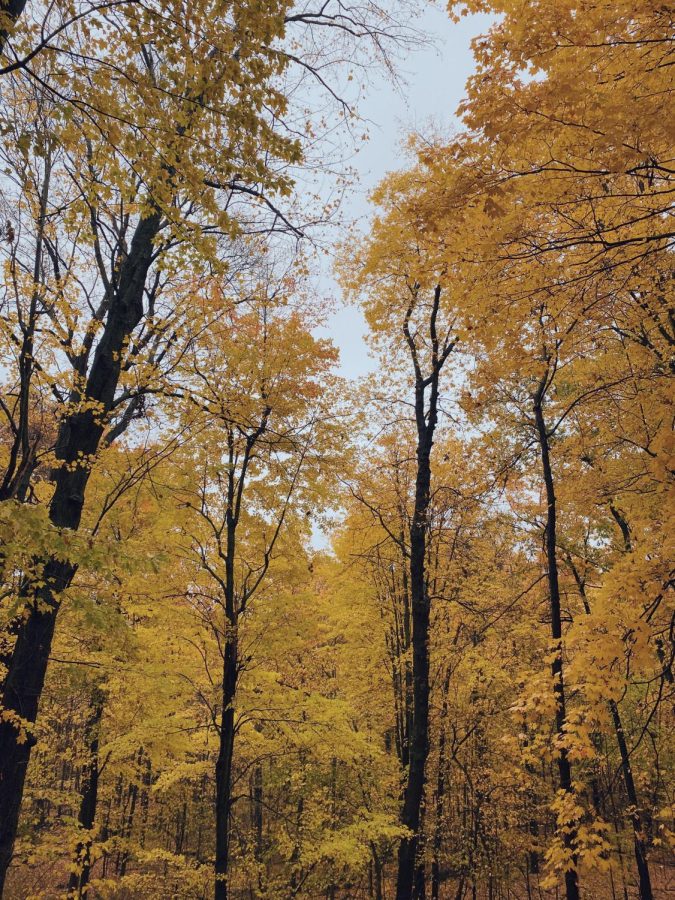 I took his picture last October when I felt the overwhelming yellow deep within me. The world will look just like this again in the matter of days.

Sewn together in thick yarn, she is emboldened in her warmth for fall that is now growing gratuitously cooler. She feels obligated to commemorate the switching of seasons through expected practices—revering the collections of warm, analogous color-scheme leaves, comprising meals of pumpkin essence, illuminating the wick resting in a shallow pool of wax in an “Autumn Leaves” scented candle. Though she finds there is excitement to be had within these rituals, they are unfulfilling.

Her weeks’ windows are fogged in monotony as they pass with the speed and strength of a tornado. Every Monday hits her like a brick wall, and every Friday evening greets her with the gentle touch of an Indian Paintbrush, for it only to be mowed down within the matter of a moment. She can grasp onto seemingly nothing because everything yearns to pass her by with such haste.

October has only just begun whispering “hello” to her, but she is oblivious to it nonetheless. Autumn’s arrival has once brought her insurmountable joy, but it is now just a reminder of several months of copy-paste patterns that await.

The trees still flirt with green silhouettes outside her windows, but the recognizable marks of fall are beginning to lace her surroundings. The colder weather has not yet graced her extremities, but she finds that insulating herself in sweaters and sipping on spicy herbal blends warm her internal being. But with the temperature and warming fixtures aside, her exterior still reads as brimmed with boredom and cold to the touch.

But on a brisk Saturday morning, she had an urge—an urge for nostalgia, a time where she felt lively with bliss, untouched by worldly constructs. She awoke to the young sun cradling the sky and her air conditioner mimicking what fall is supposed to feel like. She prepared her usual bowl of oats—this time with strong notes of cinnamon and pumpkin flavor to make fall seem real—and found her way back to her mattress, still warmed by her recent slumber. After she settled, the movie The Fantastic Mr. Fox rolled across her laptop monitor.

As a child, this movie was played numerous times in her household, as certain lines and limericks are continuously quoted by her and her family members. The setting takes place in a familiar autumn forest within the vicinity of three large corporations—Boggis, Bunce, and Bean—that manufacture and sell chickens, doughnuts, and hard apple cider. She felt the movie encapsulates the nature of fall through the whimsy of wild animals while providing an adult-ish script and sense of humor that went over her head as a child; it was a perfectly fitting film for her circumstance. She forgot how alive this movie made her feel through the bounds of stop-motion and autumn imagery and how enveloped she would grow into the storyline and characters.

As she watched Mr. Fox find a new home for his family and fellow animal constituents after a protracted battle with the men of Boggis, Bunce, and Bean, she anticipated the Fox family’s arrival at a mega supermarket. Mr. Fox then delivered a conclusive speech that she remembered to be the epitome of the film. Within his speech, Mr. Fox said, “…and even these apples look fake—but at least they’ve got stars on them.” As the rest of the riveting movie crept up her back and into her veins, this one quote remained vivid in her mind, so she stored it for reference.

Although her reality feels unreal, as May doesn’t seem close enough, she’s got so much to look forward to—she just needs to embody the spirit of a brazen, fiery fox in the heat of a monumental speech instead of ruefully wishing away her mortal time. This moment is just a period for her to embrace the reds, oranges, and yellows for what they are instead of what she wishes they could be.

Despite the differing context of Mr. Fox’s quote, it seemed applicable to her own storyline. Even though she feels like the future is too close and simultaneously not close enough, at least she is in a place where beauty can be found in simplicity—the simplicity in the smile she sketches on her teeth when she tastes the flavors of fall and sees the ever-changing colors of the forest. The simplicity in the feeling of a wool garment grazing her flesh and the simplicity of the photos of her and her friends partaking in activities within the months of decaying leaves.