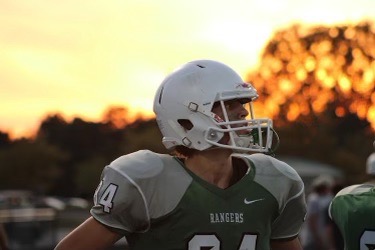 Seder Middaugh out on the football field during one of his games.

Freshman Seder Middaugh has a unique name; the story of how he acquired the name is even more interesting.

While at a race track, watching the cars zoom by, one name stuck in the mind of Seder’s father. His father admired one of the race drivers, and the driver’s last name remained in his head. Seder’s mom and sister were convinced Seder would be a girl, and while coming up with baby names, Seder’s father pointed out there was a chance of having a boy, and he got to choose his name.

“My dad really liked one of the drivers; his name was something like Pete Seder,” Seder said. “[When coming up with baby names], my dad was like, ‘what about Seder?’—which was the last name of the driver.”

Seder has two older siblings, both having graduated from college. He is the only athlete in the family but still finds that they have applicable advice for on and off the field.

“[My siblings have] been through [high school],” Seder said, “so they know the best way to go at something. It’s really nice having two siblings fresh out of college because they still have high school fresh in their mind, so they know how to study and how to shorten [the work] up and understand [the material] better.”

His siblings aren’t the only ones helping Seder through high school. Football, his coaches—Anthony Sultini and Jered Ropp—and his teammates, have helped Seder through his first month of high school. Though not many people may have expected much from the freshmen class when it came to America’s favorite game, Seder believes they play well and have shot those expectations down. The team is getting along as well, which makes playing together a lot easier. It always helps when the team is complemented with great coaches.

Seder remembers the Grand Blanc game as a time his coaches didn’t allow the team’s morals to hang low. The coaches compared their situation to one they had seen in a movie, as the other team had many more players, and in the movie, the one army was greater. The two coaches told them how the smaller army was intimidated but did not let their lack in numbers defeat them before the battle began. Though the title of the movie was long forgotten, Seder remembers this lesson and this game well.

Seder likes to believe he has a good relationship with the two coaches, which is essential as he hopes to play all four years of high school. Seder graciously gives credit to the team’s improvements to his coaches. He admires the way they can truly coach the team. He is also proud of the way the team has worked hard during both games and practice.

“What I really like about both of [the coaches] is that they’re both really energetic,” Seder said, “and they can get the team hyped up and motivated during pre-game.”

Seder has played football for nearly nine years now—under the lead of various coaching staff—since he started in first grade. Though it wasn’t his choice to start playing the game; it was his parents’. Football quickly became something he loved and was a good distraction from other aspects of Seder’s life.

Football is an aggressive game and one of the few times you can hit someone and not get in trouble. This hostile game is an astounding way to let your emotions out. Letting his feelings out through football has been a good outlet and helped Seder in the education department.

Seder appreciates the outlet football gives him. Though the sport is seen as a break from school, and Seder is honored to remember he is representing FHC while wearing his jersey.

The freshman team has a hard work ethic, and to prove that they deserve to play and represent our school they recognize that they must get along. The friendships made through football can make or break a team.

“[As a team], we have had our arguments, but we overcome them,” Seder said. “We recognize that we have to work together to make the team succeed. So, we figured it out. The [team] chemistry is building up really well.”

Seder is an outside linebacker and a tight end; he feels that in these positions, he has contributed very well to the team this season. He recognizes he has had his off games, but he is proud of the games he’s excelled in.

Seder has forged a good relationship with his teammates, coaches, and the upperclassmen. He has grown as a player and person through the season. Seder can gladly claim that the whole team is his friend group; he can’t name one person he isn’t friends with.

His family has contributed to his growth throughout the season, though they haven’t played sports, they come to support Seder. Through watching games on TV, they understand the sport and try to help Seder to the best of their ability.

“I feel like [my family] supporting me really helps me improve,” Seder said.