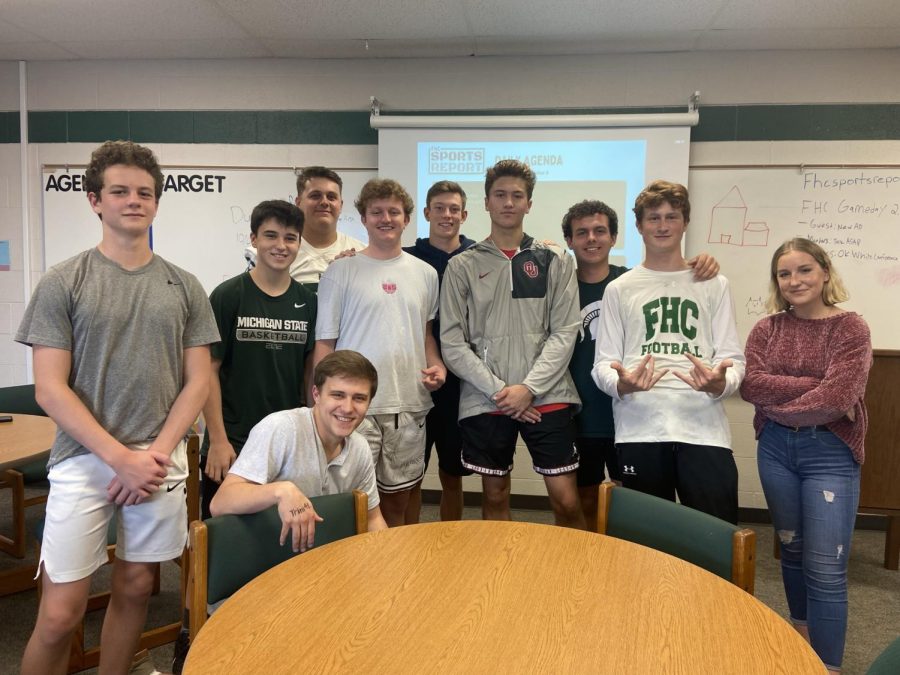 Senior Tate Greer has dreamt of all things architecture up until his junior year of high school.

After spontaneously signing up for Advanced Writing for Publication—also known as the FHC Sports Report—his destiny was about to change.

“Before I joined,” Tate stated, “I thought I wanted to go into architecture and had no idea what I wanted to do in my life—but now, I want to go into sports journalism. And without taking this class, I wouldn’t have found that passion for writing.”

As one of three Editors in Chief, Tate has uncovered a newfound love for journalism thanks to Sports Report. The class combines two things Tate adores: sports and writing. Due to that, Tate knows exactly which path to take regarding his future.

Sports Report is an athletics site and is the hub of all FHC sports games, updates, and meetings. Whether it’s recording a podcast or writing a wrap-up of a Varsity sport’s season, Sports Report contains all the information Central would ever need.

Just before last year, Sports Report was a part of The Central Trend with just a single page on the site. And by the click of a mouse, you could pull up all of the sports reporters’ hard work. However, this year, they’ve taken matters into their own hands and have created their very own site.

With this comes a whole new universe of freedom and decision.

“We feel like we have more freedom,” Tate said, “which is nice because when we were associated with TCT, we felt like we didn’t have as many opportunities to show off our work. We were a little tab; if I was on the website and didn’t know what the Sports Report was, I would go right past it. It feels like we have more opportunities.”

For senior writers Mac Boike and Joe Murdock, what they admire most was how strenuously the previous editors, alumni Matthew Mahoney and Jacob Ervin, worked to make fhcsportsreport.com a reality. Mac feels that for his senior year, it’s now the seniors’ time to shine. That all began with the creation of the new site.

“It felt like it was a new start for us,” Mac said. “We’re on our own now—it almost was like we were getting sent off to college; now is our time.”

While only being a little over a month into the school year, Sultini has already learned an immense amount not only about sports, but about the publishing process as well.

“Me, being new to the crew,” Sultini began, “has made me very humble. What we usually say here is ‘stay in your lane,’ and these guys have welcomed me into their lane. They’ve taught me a lot, and I’m trying not to step on toes, but at the same time, I’m trying to make things move a little more organized and flow well.”

With a background in English, Sultini has an interesting take on managing Sports Report, as he compares the site to a track race.

“Being an English teacher, I use a lot of analogies,” Sultini said, “and being a former track coach, it’s like a track meet. It’s a team, but it’s also individual. You have to be cohesive; you have to work well together and build off the strengths of others. Your individual work makes us as a whole better.”

Luckily for Sultini and his chemistry with the sports reporters, he has had a lot of the writers in classes years prior. Accordingly, they know where his expectations stand and how passionate he is about writing.

One of Sultini’s former students, senior Editor in Chief Adam Hop, has yearned to major in journalism since the seventh grade; therefore, Sports Report has been an incredible experience for him in the sense of learning and growing as a writer and an editor.

For Adam, it’s all about the viewers. While their readers mostly consist of athletes and parents of the athletes, it is a thrill to receive appreciation for the hard work they publish.

“It’s just about getting your work done,” Adam said. “Quality writing is first off, but timeliness is good as well. Quality is everything; you want a good story to put out there for the people to read.”

As an editor alongside Tate and senior Thomas Cobb, Adam has seen a lot of growth within the bonds of the sports reporters and also in the quality of work. Not only that, but Adam also recognizes the increasing work ethic from his fellow writers, whether it’s recording podcasts in the studio or live interviews with athletic teams.

“Since last year,” Adam said, “we’ve had a lot of our ups and downs, but we mesh well together this year with our chemistry. And the podcasts are a lot better this year compared to last year.”

There is no prerequisite prior to writing for the Sports Report, so taking Advanced Writing for Publication is an easily accessible class to add to your schedule. If you’re craving freedom but also some fun, being a sports reporter may very well be your next move.

“We have fun with what we do because we have a passion for what we do,” Sultini said. “If you have a passion for writing, and this is something you want to continue, [Sports Report] might be a good stop because you’re just defining and refining your skills. It’s a great atmosphere; if you’re good with time, and you set goals for yourself and stick to them, you’ll succeed in this class.”

Joining the Sports Report his sophomore year has taught Tate various aspects of reporting on the athletics he adores. The experience of acting as an editor and role model has given him more than he could ever ask for. Sports Report has proven to Tate that mistakes are inevitable and that, in the end, it all circles back to the reward of working together as a whole.

“My favorite part [of Sports Report] is being able to talk to all the athletes and understanding the aspect of the teams,” Tate said. “You feel like you’re an expert on each team, then, you can relay that information out to students and families, and it’s really cool when parents get to see their kid featured on the site. It’s cool for kids to get a shoutout. When I first started, I was all for myself and wanted to impress Mr. George, but now, I like to see people succeed.”

Writing for the FHC Sports Report has given many students the opportunity to gain real-world experiences to prepare them for life after high school. As a matter of fact, a good majority of the sports reporters hope to continue in this realm of journalism in college. It’s a class worthy of success and acknowledgment, as being a published writer is a gargantuan accomplishment.

Future college sports reporter, Joe, is most thankful for the people he idolizes in the writing atmosphere and what Sports Report has done for him throughout his high school career.

“My mentors—George, Sultini, and [Robin] DeMeester—have helped me become a much better writer and person,” Joe said, “and for that, I will forever be grateful to the FHC Sports Report.”