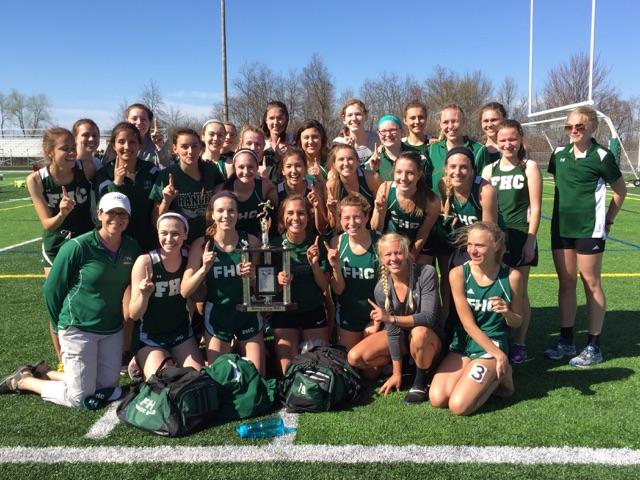 23 years. Head Track and Field coach Clare Emaus has been coaching for 23 years. But now, the end of an era has arrived with the announcement of Emaus’ retirement as head coach.

“My time has come,” Emaus said. “We moved to a house on Murray Lake, and I’m getting older. My daughter is out of high school, and I want to visit her and my sons and enjoy time on the lake in addition to other things. I just know it’s time.”

Emaus first took the job at FHC after urging from friends who coached swimming at EGR. Since then, Emaus has seen and done it all in her time as head coach. From coaching current colleagues to coaching her child, Emaus has overseen almost all major changes to the track program. She has even overseen track practices with no track.

“When I began, we didn’t have a track,” Emaus said with a smile. “We would practice in the parking lot and one year a parent paid for us to drive to EGR’s track twice a week.”

Since the arrival of a track, the program under Emaus’ control has grown leaps and bounds. With numerous athletes going on to state championships and beyond to college careers throughout the years, one has to wonder how Emaus got so much done. The answer to this question can be found in the infamous “tough love” Emaus was known to give. Emaus’ technique for coaching her athletes by challenging them helped push them farther than they knew possible and prepare them for whatever was to come.

“[Clare] takes no excuses and holds all her athletes to extremely high standards,” said track coach and former Emaus athlete Britta Eastburg. “But this is partly what made her such a great coach. She challenged me to do more than I ever thought possible. I remember one practice when she made us run 20 200s. I thought she was crazy. But after we did it, we were all so proud of ourselves. And that year our 4×800 relay went on to become all-state athletes.”

23 year pole-vaulting coach Bob Levering agreed with Eastburg, saying that Clare gave 100% of herself for the sport and became an expert, and expected 100% from her athletes all the time in return. He continued by saying that a lot of athletes understand Clare right away and improve, and the rest looking back understood her later. Emaus’ hope is that whenever these athletes understand, whether it be now or in many years, they realize she tried to prepare them for life in addition to track.

Although Emaus is known for her tough mentality on the field,

“Clare Emaus isn’t nearly as tough as Coach Clare,” Eastburg said. “Sometimes students are intimidated by Coach Clare, but after working with her for the last three years, I’ve discovered she is much more of a softy than she appears to be.”

One former record swimmer and pole vaulter understands the many sides to Emaus, and holds a particularly special place in her heart: her daughter, Katlynn. Moving on to swim at Oakland University, Katlynn has shifted from being bothered by her mother’s coaching to viewing it as a pleasure.

“Both of us were ending together,” Katlynn said. “My freshman and sophomore years it was kind of a struggle to be her daughter and athlete, but my junior and senior years especially made me realize that being coached by my mom gave us a special relationship and brought us closer together.”

Although Clare only coached one of her biological children, she considers all of her athletes and fellow coaches to be family. Emaus says she measures an athlete’s success by the story they tell after leaving FHC more than their ability to perform well on the track, and she keeps up with these stories as best as she can. Using Facebook with former athletes and building closer bonds with those she still coached helped her create the close connections she shares with all of her runners and colleagues to this day.

“When I was younger, track athletes were always at my house,” Katlynn said. “My mom poured herself into these athletes and they responded, and because of that they were willing to work for her.”

This immense love for the relationships built through track was what kept Clare coming back all of her 23 years. Behind her tough facade, Katlynn, Levering, and Eastburg all noted that Clare was driven by a sense of caring for her athletes and a passion for the students she coached.

As Clare’s career closes as head track coach, many are left in admiration of Clare’s dedication to the sport and improving her athletes.

“It was a good experience watching the way she coached,” Levering said. “Clare coached because she loves the sport and helping the kids improve on the track and off.”

Easturg agreed, noting that Clare has done so much more for the FHC track program than people realize, and that she will be greatly missed.

With the retirement of Clare, the track community is left with a gaping hole in its roster. With the loss of a tough coach, they have lost the infinite knowledge, life preparation, and bundles of love and passion Clare has brought to the program for the past 23 years.

Clare’s final words as coach are to the parents and staff of the FHC community, thanking them for letting her work with their children all these years.