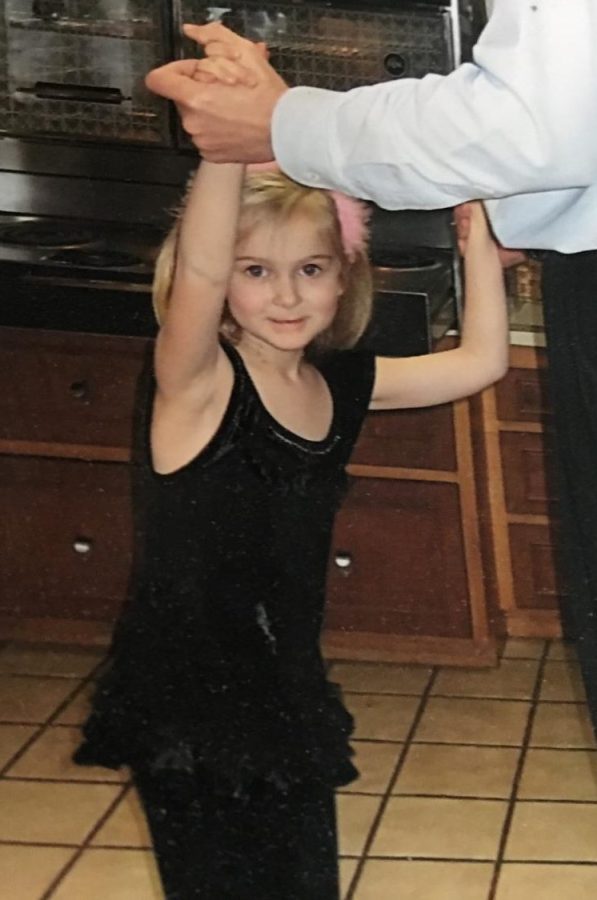 Young me dancing in the kitchen with my dad after putting on my favorite outfit.

She’s been on this earth for fifteen years.

Her brain feels smushed by three too many hammers to the head in the form of migraines. For one-third of her life, the spot right between her eyes has been repeatedly pounded. Five years of her life. Migraines have seen her change from a ten-year-old girl at an environmental school to a sophomore crumbling under the stress of minuscule assignments.

Her feet are worn from the strain of fifteen years of movement. They’ve seen the sidewalks full of hidden Mickeys at Disney more times than she can count. They know the path to every one of her classes. They remember the path from her fifth and sixth-grade classrooms to the leaning tree that she sat on to write. If she is set free from inside the walls of Goodwillie, she can bring you on the trail guiding path.

Her voice grows hoarse from all the yelling and speaking she’s done. It remembers the speeches she would give at every spot of the trail. She could tell you that Isa Brown Chickens are bred from Rhode Island Red Chickens and Rhode Island White Chickens. She could teach you about Autumn Olive, which was the station she started at for every guiding opportunity. She could explain the tale of how the Big Dipper Fort was created.

Her eyes move restlessly to analyze her surroundings for triggers of memories. They would immediately find the vine swing by the fort. She could hear what attraction they had to go to next at Disneyworld and her eyes could scan her surroundings and immediately find the right path. They can remember the Disneyland map from her phone so well that she knew her way around without having ever been there before; They work a little less fluently with her brain after being under strobe lights, and after fifteen years, she knows this.

Her memory may occasionally fail her, but she remembers random parts of life that somehow made the most impact.

She remembers the second-grade boy that refused soup then asked for some five minutes later. She remembers the pure joy filling her body when she saw the Disneyland castle was no longer under renovation upon entering the park. She remembers her brother telling her that there were crocodiles inside the fence on the way to the pool at her grandparent’s old Florida trailer home. She remembers dressing up in her nicest clothes to dance with her dad in the kitchen. She remembers being the “distraction” with her friend during every game of Capture the Flag at Goodwillie. She remembers outlining Côte d’Ivoire for a project at her desk while her tablemate got Sharpie on their desk and was cleaning it with hand sanitizer. She remembers leaving her friends at a school football game at Fifth-Third ballpark to go run across the field as a youth cheerleader.

Even with fifteen rotations around the sun, she can remember some of her most minuscule moments.