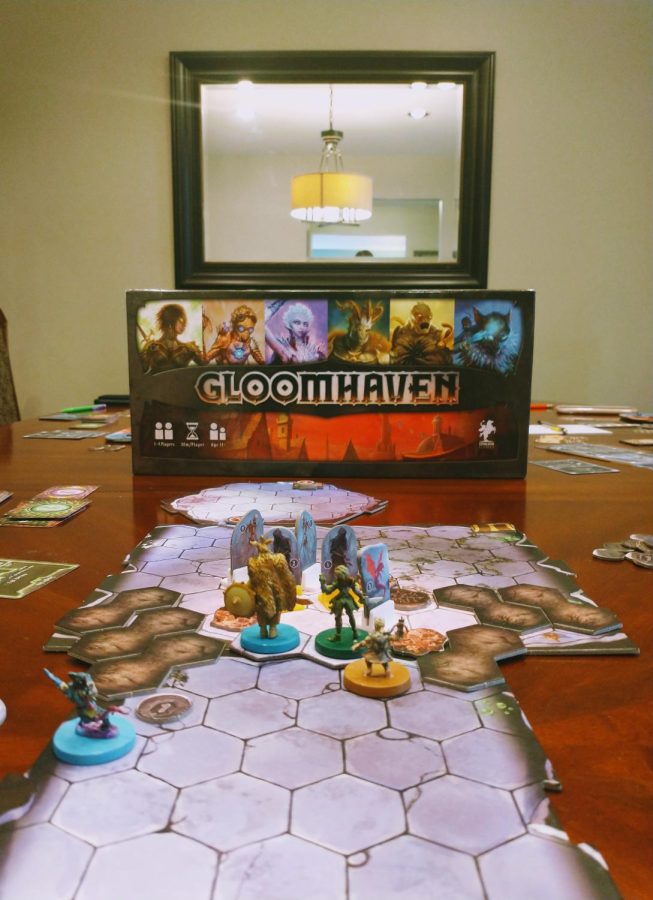 My friends and I fighting in a mid-scenario battle against Gloomhaven's Spitting Drake, Cultist, and Living Bones.

Choosing your own adventure, fighting fantastical monsters, and cooperating with friends all combine to create the progressive board game I am addicted to: Gloomhaven. The massive box, its contents, and the nearly 100-page rule book make the game appear to be a feat only the top-tier board game geeks can accomplish. However, this daring adventure has the ability to whisk away any soul brave enough to attempt such precarious tasks.

Board games are no strangers to my household; the bookshelves of my house are crowded with games centering around chance, logistical ability, and carefully calculated risks. These competitive distractions bring joy and adventure to my family along with the excitement of adding more editions to our collection; however, I couldn’t help the spark of skepticism that tingled in the back of my head when Gloomhaven first claimed a spot—massive with its unrepentant size and complexity.

Thankfully, the intrigue outweighed my hesitation. After I played it for the first time, I was hooked.

Gloomhaven begins with the creation of a character such as the Brute, Spellweaver, or Mindthief. Each is given a unique set of abilities that aides their comrades in fighting monsters, collecting treasure, and saving everyone in the city of Gloomhaven. The game consists of 95 different scenarios, presenting a party with different layouts, monsters, objectives, and a variety of other irregularities that create new atmospheres with every distinct challenge.

Unlike other cooperative games where one person usually becomes the leader, such as Forbidden Island and Scotland Yard, Gloomhaven prevents anyone from taking control over party actions; everyone is a part of the decision making process.

I originally complained about the extensive set-up time and expendable pieces; however, I now understand that those aspects only add to the excitement—transporting characters into entirely new worlds and forcing players to come up with new strategies and battle tactics.

As parties advance through the Gloomhaven storyline, new characters, locations, and items are unlocked. There are physical boxes that are sealed and can only be opened once certain goals or achievements have been accomplished. While placing a sticker or opening a tiny box may seem minuscule, adding these rewards to my game repertoire are highlights in my day.

Even after spectacularly failing a scenario—due to either being killed by the monsters or becoming exhausted—I still had an incredible experience, eager to jump back in to conquer my foes.

I was pleasantly surprised by the fantastic flow of the storyline. It gives characters a purpose while also allowing them the freedom to write their own destinies. The artwork adds a breathtaking touch as its intricate designs and color choices immerse the players into a world full of demons, skeletons, and bandits.

The lengthy learning process was without a doubt worthwhile as it was a necessary step to bask in the full glory of the game. Instead of fear, I am now filled with excitement as I turn to face the monsters that await.