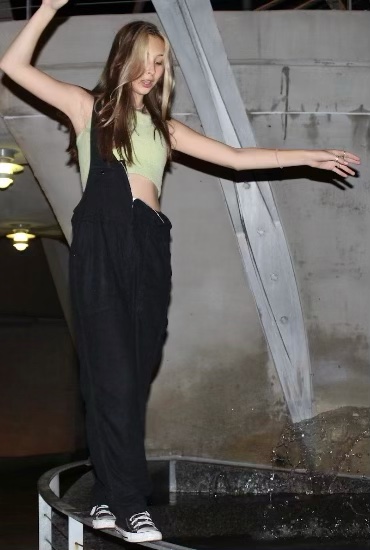 It’s still my birthday until there’s nothing left of the cake but crumbs, until the candles burn to the end of the wick, and until I receive every last belated wish.

The clock will strike midnight on Oct. 12th over and over again until I finally drift off to a world where time is stuck, for I am still sixteen. But when I wake, seventeen flames dance before my chocolate-colored eyes, and I know that everything has changed; I am no longer held accountable for the naive little girl I once was.

At sixteen, I was still holding onto juvenile ideas of self-worth and independence when I couldn’t look away from people who hung unrealistic ideas of who I should be over my head—I since let the individuals go who had diluted the celebration of 6,205 days of life. Now, at seventeen, I watch as the wax burns lower still and remember each chapter of struggle but also each segment of improvement.

Today, I am one hundred-ninety-two hours along in my journey of letting go. I’ve since traversed through hatred towards broken relationships but also through love for new ones. While turning over a new leaf, I discover the importance of chasing my own desires. Since sixteen, I had known who I was, but now, at seventeen, I hope to become that perfect version. While it hurts to turn my cheek on our past, in the end, it was satisfying to blow out my candles, wishing for someone else.

Balloons pop just like my heart once did, and streamers fall like tears, but the taste of rich, chocolate cake fills up my senses, and I know that my Sweet 16 could have never been as sweet as the way you now treat me.

In the past year of my life, 2020 has taught me a lot about being stuck in uncomfortable situations. Just like sitting and waiting for my family to finish singing me “Happy Birthday,” I remember anxiously counting down the hours to finally let go of sixteen. I was holding onto fake friendships, unrealistic standards, and a false version of who I was meant to be—I turned seventeen, and I finally had the courage to ask to skip my least favorite song.

Within the next three hundred sixty-five days, I will turn eighteen and move away from home. The most intriguing thing about this upcoming age is the unconditional change that I can’t stop despite any amount of effort. In this transition to adulthood, forevermore, I hold the independence of not needing to give everyone else a little piece of myself.

Being eighteen will mean that I am the ideal copy of the little girl who had so much left to learn, but yet, was still asked to give so much of herself away to the public’s eye. She was asked to show empathy to those who didn’t deserve it. She was asked to put on a brave face when she felt anything but. And she was asked to be understanding in times where there was only miscommunication. Like party favors, the little girl pretending to be a young adult gave gifts on days where everyone else should have been celebrating her.

At seventeen, I will no longer give out undeserved party favors, listen to uncomfortable melodies, or blow out the candles for someone who wasn’t the real me. In less than a year, I know that I will feel relieved to let go of seventeen.